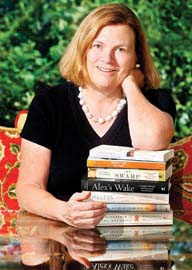 Cynthia Brown has been instrumental

in lining up the authors for the Festival

At this year’s Festival Of The Arts Boca, you’ll find ballet, banjo, Bernstein and, of course, books.

From March 6 to 15, stars of the American Ballet Theater and other major companies will perform. Banjo virtuoso Bela Fleck will plunk. Leonard Bernstein’s daughter, Jamie, will reflect on West Side Story and her father’s musical legacy. And authors of both fact and fiction will discuss their books.

For the books and authors, thank Cynthia Brown. A festival volunteer since its inception eight years ago, the coastal Delray Beach resident and mother of three spends a good part of her year conjuring a roster of writers she’d like to bring, contacting their agents, finding who’s available, how much they charge and steering them through their appearances.

“I usually pick the most expensive speaker first and work from there,” she says. “We try very hard to present people with different ideas and opinions so we’ve got an interesting program.”

“Sometimes they’re not available and money’s a limitation,” she concedes. “These people are not inexpensive. That’s the limitation. It would be wonderful to have Colin Powell, but that’s not ever going to happen.”

Does she have a favorite from her years of volunteering?

“The favorite of everybody would be Doris Kerns Goodwin, who is just the way she seems,” Brown says. “She’s a genuine, warm, interesting person, and she’s interested in people.

“But I’ve been surprised, frankly, by how accessible everybody is. Nobody I’ve dealt with has been anything other than gracious and easy to work with.”

A. My son is engaged to a Midwestern girl and I realized then that Midwesterners just have solid values. They’re very community-oriented, and I’m grateful for that. Growing up in Columbus, I couldn’t wait to get out, and now I look back and think, ‘That was really something special.’

A. I worked on Wall Street for a while and I’ve always done something. I still sell clothes in trunk shows three or four times a year. In the early ’90s, when I was living in Atlanta, I helped start a group in Georgia called Georgians For Children, a child advocacy group that would gather statewide data and work to improve their lives. I’m very proud of having done that.

A. Think about what’s important to you and what you like to do, and if you do that you’ll be happy in what you’re doing. Do what interests you.

Q. How did you choose to make your home in east Delray Beach?

A. I moved here when I downsized. I was living in Boca Raton, and it wasn’t even a conscious decision. I had a bull mastiff, Tembo (Swahili for elephant), and this was a place that would allow a bull mastiff, and it’s been perfect.

Q. What is your favorite part about living in Delray Beach?

A. I love the fact that it’s just easy to live here. Everything’s convenient. We have great restaurants, lot of things to do and it’s pretty.

A. I’m finishing Richard Ford’s latest novel, Let Me Be Frank With You, and then I’ll move on to the next, probably Smarter Than You Think.

A. I like classical music for relaxing, or blues. But if I really want to relax I listen to absolutely nothing. I listen to the wind in the leaves.

Q. If your life story were made into a movie, who would you want to play you?

A. Lots of things. Where would we be without laughter? I’ll tell you what, though, I’m going to miss Jon Stewart.