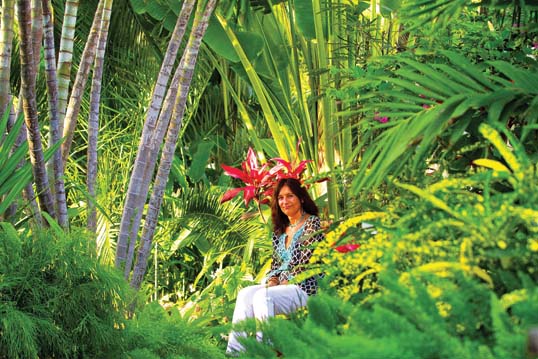 This year she represented the Grass River Garden Club at the Society of the Four Arts, and in 2010,

she represented the Ocean Ridge Garden Club at the Norton Museum of Art.

Inset below: Christina Benisch’s award-winning arrangement in the “Fungus Among Us” class at the Garden Club of Palm Beach’s show.

You could say that Christina Benisch has looked at life from both sides now, and finds both sides appealing. In the past, she has traveled the world and has had more than her share of exciting escapades. Now she’s enjoying her family, pets, garden and Florida’s natural beauty; what could be more fabulous, she asks?
As a child, she lived in Africa and Mauritius, while going to school in England. “After college, my first job was with a theatrical agency and from there, I went to work for a writer who was a film producer, and then I went to Kenya to visit my parents, fell in love with the country and stayed there for five years. I worked for a safari company and absolutely loved it.”
Following that, she worked for Pan Am for 18 years. “That was a great life, and I really loved it, too,” she said. 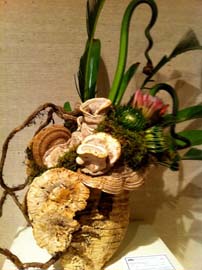 While working for Pan Am, she met her husband, Robert, on a blind date. “We hated each other when we first met,” she said. “He had just come from arguing a case in the Supreme Court, and I had no idea what that was about. I thought he was too New Yorky and alpha dog, but he grew on me, and I grew on him, so here we are 32 years later.”
They lived in New York City until their two daughters, Justine, 29, and Olivia, 28, went to high school. At that point, they moved to Connecticut, and when the girls went off to college, the Benisches decided they wanted to move south for the winter.
“My husband is a golfer, so, the first year, he chose Hilton Head. It was freezing. You had to break the ice to tee off. The next year, he let me choose and I had just read about Delray Beach. I thought it would be interesting to go there and rent. Then we rented in Ocean Ridge, and bought our house in Pelican Cove. I never thought I’d live in a gated community, but it’s so easy.”
Benisch doesn’t share her husband’s passion for golf, but she has some passions of her own. She makes items with shells and creates jewelry with her daughter, which she sells through her business, Dragonfly; and gardening has become an obsession.
“I started gardening when I moved from New York City,” she said. “We bought Jessica Tandy and Hume Cronyn’s home on five acres in Eason, which is now for sale. It had some serious gardens, but Jessica had gardeners. When I bought it, I had only me, myself and I to do the gardening.”
Here, she planned and planted the gardens around her home in Ocean Ridge, which was “a wasteland” when she bought it.
Now it’s blooming beautifully, and she recently won the blue ribbon in the Garden Club of Palm Beach’s show, “From the Ground Up” in the “Fungus Among Us” class, using plants from her garden (bromeliads, sago palm, kukuma fern, protea).
“I had some interesting pieces of fungus that I bought from a flea market in Connecticut, and when I learned about the “Fungus Among Us” class, I said, ‘Aha! I can use that,’ and I found this container made of bamboo wood. I knew I had the props that would work, and I was thrilled that I won. I felt like Cinderella. It was a nice achievement.”
— Christine Davis

Q. Where did you grow up and go to school? How do you think that has influenced you?
A. I was born in Trinidad and grew up in Ghana, South Africa, Mauritius and East Africa. My father was with the British Colonial Service, so we traveled extensively, which gave me a love of adventure and a somewhat nomadic existence after my college years. My school years, from age 10 to 18, were spent in convent boarding schools in Cape Town, South Africa and Sussex, England. This was “the English way” at the time and it gave me an independence and self-sufficiency, although at times it was a rather lonely childhood.
Q.  What careers have you had; what were the highlights?
A. My first job was working for a film producer and theatrical agent in London, after which I worked for a safari company in Kenya in the early ’70s where I organized safaris for Stewart Granger and the king of Bhutan among others. I also worked on the movie Living Free.
In Nairobi I was hired as a flight attendant for Pan Am because I spoke French and Swahili and had to make the in-flight announcements in those languages. It was a glamorous job in those days as we flew all over the world and met lots of interesting people and celebrities. There were many highlights, but I remember most of all the dangers of being in Tehran when the shah was overthrown and his image was being burned in the street outside our hotel, and also being in a coup in Liberia when the army rebels took over the country.
I now operate an antiques and design business in Connecticut and Delray as well as create shell and coral mirrors, lamps and cachepots for decorators and designers in the area.
Q.  How/when did you begin flower arranging?
A. Moving from Manhattan to Connecticut 15 years ago gave me a new appreciation of nature and a love of flowers. I joined a garden club up north and became hooked. I now belong to the Grass River Garden Club as well as the Ocean Ridge Garden Club down here.  I am constantly walking Old Ocean Boulevard picking up discarded palm fronds, seeds, twigs and assorted flotsam and jetsam for various floral projects.
Q.  How did you choose to make your home in Ocean Ridge?
A. Once our daughters were in college we decided to head south for the winters. As my husband is a golfer,  Florida was a no-brainer and I liked the  sound of the Delray area as it was small and artsy. We rented from a friend who had a home in Ocean Ridge, fell in love with the community and bought shortly thereafter.
Q.  What is your favorite part about living in Ocean Ridge?
A. The sun and the sea. Looking at the water every single day.  The small-town atmosphere. It is easy to get involved in life here and to make friends.
Q.  What book are you reading now?
A. I just finished reading Black and White Sands, by Elma Napier, a biography of a British aristocratic family who gave up their lifestyle and went to live in Dominica in the 1930s. Recommended by a friend who lives between Ocean Ridge and Dominica. I am about to start Canada, by Richard Ford, also recommended by a friend.
Q.  Do you have a favorite quote that inspires your decisions?
A. Well it was “Just do it,” but I opened this month’s Oprah magazine and a quote jumped out: “Instead of worrying about getting older, we can focus on leading a brilliant life.” I thought that was kind of cool, so it may become my new mantra.
Q. Have you had mentors in your life? Individuals who have inspired your life decisions?
A. Many individuals have inspired my life decisions at different times through the years, but I will always remember the kindness and gentleness of my father and the courage and humor of my brother as being inspirational. I turn to my practical and grounded husband to provide a balance to my occasionally erratic and out-of-the-box ideas and notions.
Q. If your life story were made into a movie, who would you want to play you?
A. Probably Dustin Hoffman, who did such a good job with Tootsie.
Q.  Who/what makes you laugh?
A. Silly below-the-belt British humor and my witty and irreverent daughters, who constantly poke fun at me and tweet my motherly faux pas and malapropisms for all the world to see. As they say, if you can’t laugh at yourself …