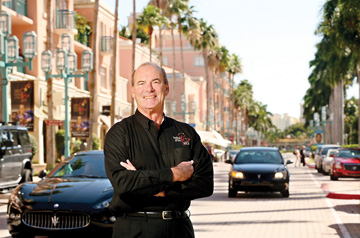 Land-use planning consultant Charlie Siemon lives and works at Mizner Park.
He helped create the original vision in the early 1990s for the mixed-use downtown
development, and has overseen Festival of the Arts Boca since its debut in 2007.
Tim Stepien/The Coastal Star

It makes sense that Charlie Siemon lives and works in Mizner Park.

After all, his land use planning firm, Siemon & Larsen, created the vision for the landmark redevelopment project more than 20 years ago as a true town center — a place to live, work, dine, shop, socialize and experience the cultural arts. By anchoring his life in Mizner Park, Siemon is “walking the walk” of good urban planning.

The location is mighty convenient, too, when you spend as much time as Siemon does planning Festival of the Arts Boca, the city’s annual celebration of music and literature.

It helps to have your apartment and your office just steps away from the festival’s parent organization — the nonprofit Schmidt Family Center for the Arts — and the festival’s main venue, the Count de Hoernle Amphitheater.

Siemon, 66, co-founded the festival in 2007 and has served as its chairman each year. It’s a role he embraces, but admits is a lot of hard work. He says the recession and changes in the entertainment business have made world-class festival programming a challenge in recent years.

First, there’s the money to be raised.

“What gives an arts festival sustainability is a title sponsor who makes a multi-year commitment,” Siemon said. “Our plan was to have a title sponsor by Year 5, but we couldn’t make it happen. Our major sources of support were in the real estate and hospitality industries, and it’s been a really bad last three years for those industries.”

The recession also prompted individual givers to shift their monetary contributions away from the arts and toward social services, in order to help those hit hardest by the economic downturn.

Secondly, big-name musical acts have become tougher to sign for an intimate venue like the park’s amphitheater.

“It used to be that artists like Aretha Franklin or Ringo Starr went out on tour to interest fans in buying their CDs. Well, they don’t sell CDs anymore. Touring is their primary source of income now, so they mostly go to the big venues,” Siemon said.

“When Harry Connick Jr. used to come to South Florida, he’d stay for several days, do six or seven shows, and we could get him for a show here that might have 3,500 people in the audience. Now the big acts are at Sun Life Stadium, with 60,000 seats, or at the Indian casinos.”

Despite the new realities, Siemon and fellow organizers have pulled together an engaging mix of offerings for this year’s festival, which runs March 7-18.

Looking back, Siemon is pleased that Mizner Park became a catalyst for downtown Boca’ Raton’s renaissance, a process that continues today. (Borrowing from American writer Gertrude Stein, he says there was “no there there” before Mizner Park was built on the old Boca Mall site in the early 1990s.) And he’s proud to be part of the “tradition of cultural excellence” that the festival of the Arts Boca has established.

Will he continue to lead the festival?

Q.  Where did you grow up and go to school?

A. I grew up in West Palm Beach and attended many schools: Ransom High School, Emory University for undergrad, Florida State University for graduate school and law school.

Q.  What are some highlights of your life?

A. I have two daughters and four grandchildren. I am lucky to be working with Wendy Larsen, my business partner since 1975. I live in Boca Raton and have a fabulous home in the Keys.

Q.  How did you choose to make your home in Boca Raton?

A. My father owned an office supply company called Halsey & Griffith, which had a branch store in Boca Raton in the early 1960s. I worked there one summer and enjoyed it. After Wendy Larsen and I helped plan Mizner Park, we moved our office here. There is no other place in Boca where you can live and work and not have to use your car.

Q.  What is your favorite part about living in Boca Raton?

A. The cultural components have grown. There are great universities, including FAU and Lynn University. It is a very welcoming community — you can move to Boca and immediately be able to get involved. In many other areas of the country, it takes much longer to get involved.

Q. What is your biggest challenge as chairman of Festival of the Arts Boca?

A.  The biggest challenge has been the recession. It is hard work building a tradition. It takes time.

Q. What is your favorite part of Festival of the Arts Boca?

A. Seeing really great artists who wouldn’t otherwise be accessible in Boca Raton, such as Renée Fleming, Valentina Lisitsa and Itzhak Perlman, and seeing the community enjoy them. I also love that there’s a lot of interaction between artists and authors who appear at our festival, many who meet for the first time in Boca.

Q. If someone made a movie of your life, who would you like to play you and why?

A. Jack Nicholson … I think he’s a great actor and I love so many of the roles he has played.

A. I have three: “The true meaning of life is to plant trees, under whose shade you do not expect to sit.”

“Things are never so bad that they can’t get worse.”

“To be successful you have to play the cards you are dealt, not wish for a better hand.”

A. Yes, a former senior partner Wendy and I worked with, Richard F. Babcock, who was a pioneer in professional planning and law. Wendy and I both co-authored separate books with him.

Q. Who or what makes you laugh?

A. My grandkids, ages 2 through 10. And Stephen Colbert.

For more information: Call The Schmidt Family Centre for the Arts in Mizner Park,  368-8445.