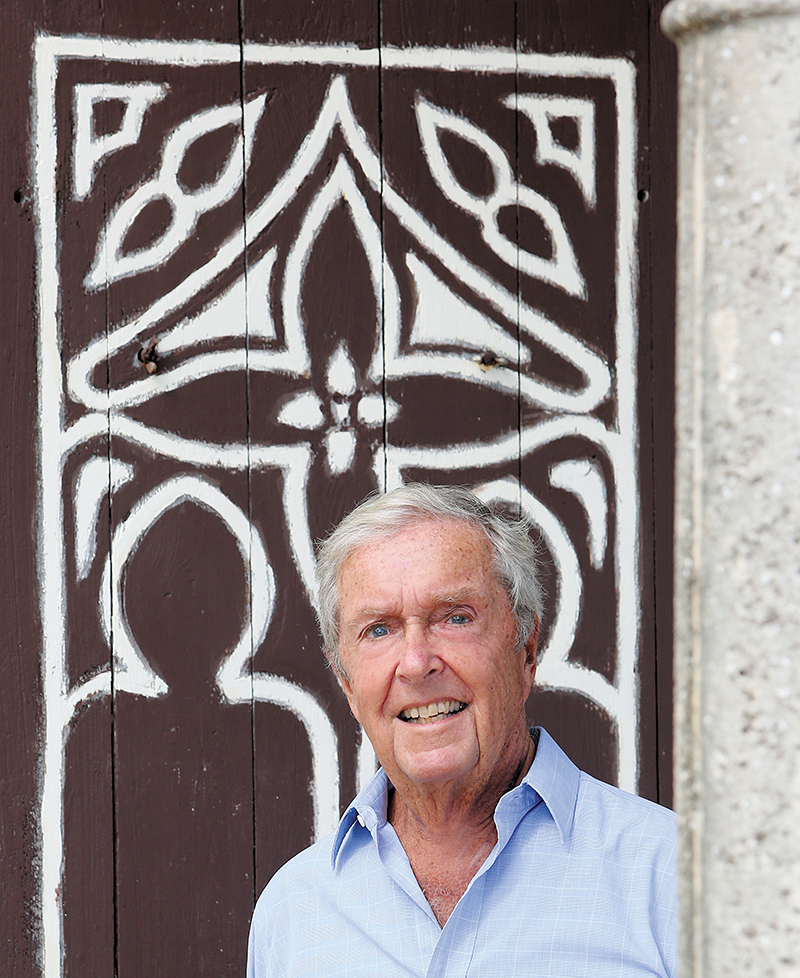 To say Bob Ganger has a passing interest in local history is like saying Shakespeare had a passing interest in writing plays.
After Ganger and his father went to check out a beachside house in Gulf Stream that had been built by a member of the Vanderbilt family, he not only bought it but wound up writing a book about the woman who built it and its history.
And after meeting Harvey Oyer (president of the Palm Beach County Historical Society at the time) at a dinner party more than 20 years ago, Ganger joined the organization, eventually joining its board of directors. He and Oyer also teamed up with others in a successful effort to restore the old Palm Beach County Courthouse.
Ganger, 82, blames the transient nature of this area for a lack of appreciation of history among its residents.
“When you realize a million new people come into the state every couple years, and with no background on who we are, over time the local history gets diluted,” he said. “We’ve found that, both in Palm Beach County and Delray, very few people have a clue as to who we are, and how we got to be what we are.”

Q: Where did you grow up and go to school?  How do you think that has influenced you?
A: I grew up in Bronxville, a tiny New York City suburb newly inhabited by recent veterans of World War II who were motivated to make up for lost time and provide their families with a great home.  The local high school was highly competitive. My class graduated 75 students who achieved well over 125 advanced educational degrees.  I managed to graduate with honors from Yale and Harvard Business School, based largely on the disciplines taught at an early age.
Believe it or not, my high school class still gets together for five-year reunions. The latest was the 65th!

Q: What professions have you worked in? What professional accomplishments are you most proud of?
A: My professional career was almost entirely in the food industry. After a brief stint in the Air Force Reserves, I started at General Foods as an assistant product manager on Jell-O, and retired 32 years later as VP of planning and development. Our company was purchased by tobacco giant Philip Morris in 1985 and I was tasked to recommend a long-term strategy for the company’s future participation in the food industry. I’m proud of the fact that my plan is still being executed almost 30 years later, even after Philip Morris divested their food interests.
After executing the first add-on acquisition, Kraft Foods, I retired to become a consultant to start-up consumer product companies, some of which have been quite successful.

Q: What advice do you have for a young person seeking a career today?
A: The business world has changed dramatically since I began my career, but one fact is still apparent: Life is too short for someone not to enjoy his or her work, but one is naïve if a “perfect job” is a career assumption. In 32 years at General Foods, I probably had 20 jobs, some of which were unpleasant but educational nonetheless. Each job provided new perspectives on the business world. In today’s fast-moving environment, gaining new perspectives is a must for success in virtually any career plan.

Q: How did you choose to make your home in Gulf Stream?
A: On Easter Day 1969, my dad and I visited a house on the beach that was willed to Good Samaritan Hospital and had been empty for years. It was built by a Vanderbilt but divided during the 1930s into two separate dwellings. A developer had an option to acquire both dwellings when the original owners, both widows, passed away. Both houses were slated to be torn down. We decided to find another potential owner and make a bid.
Then Joe Kennedy, a patient in the hospital, passed away, leaving the institution a large gift. The hospital decided that our quick nickel was superior to a slow dime. We acquired the house in late 1969, and I moved in full time after my father died in 1991.
Parenthetically, my wife, Anneli, and I restored our house starting in 1994. To assure that the restoration was legitimate, we researched the plans of the original owner, Lila Vanderbilt Webb, granddaughter of Commodore Vanderbilt. Her story compelled me to write a book on who Lila was, and why she decided to build a house in Gulf Stream.  The book, titled Miradero, was judged by the Independent Publisher Book Awards as the best nonfiction for 2005 among independently produced U.S. publications.

Q: What is your favorite part about living in Gulf Stream?
A: Besides living in a lovely home, Gulf Stream provides an environment allowing me to engage in “small town” public service. My interest in local history led to a position as vice chair of the Historical Society of Palm Beach County, and chair of the Delray Beach Historical Society. I have also served as chairman of the Florida Coalition for Preservation, president of the Gulf Stream Civic Association, and as a commissioner for the town of Gulf Stream. Believe it or not, these assignments all relate to one another from time to time.

Q: What book are you reading now?
A: I am re-reading A Land Remembered, by Patrick Smith. While fictional, it captures the essence of pioneer life in Florida during the last half of the 19th century.

Q: What music do you listen to when you want to relax?
A: When my friend Dana Gioia was chairman of the National Endowment for the Arts, I made the mistake of telling him how guitar music was my ultimate “relaxer.” He sent me enough guitar CDs to play for the rest of my life.

Q: Have you had mentors in your life?  Individuals who have inspired your life decisions?
A: Late in my business career, I became associated with Hamish Maxwell, then chairman of Philip Morris. He was an extraordinary thinker. He surrounded himself with very bright people, and absorbed information like a sponge. In retrospect, his decision-making saved his company and industry from an almost certain early demise. We both retired on the same day and remained in contact until he died in 2014 at age 87.
By the way, I have “smoked” one cigarette in my life, on April Fool’s Day 1952.

Q: If your life story were made into a movie, who would play you?
A: Possibly Michael Caine — for revenge. Years ago, we were both in Fort Lauderdale at the same time, and some teenagers mistook me for Mr. Caine. I signed dozens of autographs and had photos taken.

Q: Who/what makes you laugh?
A: Bring back Rowan and Martin. I love corny humor.