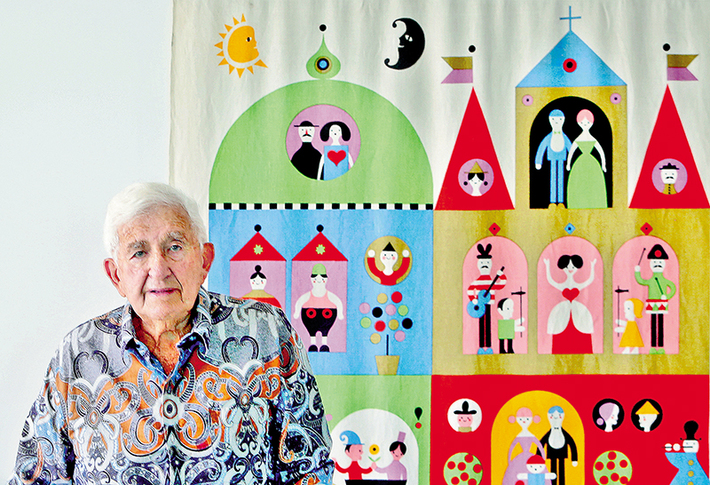 Bill Lazer, 98, of Boca Raton became a business professor and taught for almost 40 years at Michigan State and Florida Atlantic universities. He made friends with business executives, including Walmart’s Sam Walton. His condo has a limited edition wall hanging by Alexander Girard, who produced it for Herman Miller furniture. Tim Stepien/The Coastal Star

College was not remotely on the radar for Bill Lazer as he grew up in the Canadian prairie city of Winnipeg. He finished high school, got a job at a garment factory and didn’t think much about his future.
Then along came World War II and the then-18-year-old enlisted in the Royal Canadian Air Force in 1942. His assignment wasn’t glamorous — he was stationed in Labrador, where ships traveling from the U.S. and Canada to Europe routinely stopped to refuel. But the Canadian version of the G.I. Bill gave him the chance to enroll at the University of Manitoba.
Lazer earned a degree in commerce, marking the beginning of a life ensconced in education, from earning master’s and doctoral degrees to nearly 40 years as a professor at Michigan State and Florida Atlantic. He also served on boards and committees impacting a variety of aspects of American life.
“I never planned to go into teaching,” said Lazer, who lives in coastal Boca Raton, “but once I got into it I was having a ball. It was, God, they’re paying me for this? I was having an impact on the lives of people and it was utterly fantastic. I never dreamed I would enjoy it so much.”
Lazer’s first job after school was as assistant to the president of a knitting mill in Winnipeg, but the University of Manitoba needed a business professor and persuaded him to come aboard. After three years he moved on to Michigan State.
“The job was for one year and I stayed for 28,” he said.
Many of his students were executives, whom he enjoyed more than his regular students.
“The students are afraid of you — they have to get a grade,” Lazer said. “The executives don’t have to get a grade. They’ll tell you what they think, and I love it. As a result of Michigan State, I was able to deal with executives effectively.”
Many of them also became friends, including Sam Walton, the founder of Walmart and Sam’s Club; Japan’s Masatoshi Ito, who built 7-Eleven into the giant of convenience stores, and Hoshiro Mitsunaga, who founded Dentsu, the world’s largest ad agency.
Lazer, 98, also enjoyed a 61-year marriage to Joyce, now deceased, who was trained as a classical pianist. Lazer said that none other than Arthur Rubinstein said he would have recommended her to any conservatory in the world.
“Fortunately for me she decided to study philosophy when she got to university, so she permitted me to do anything I was able to do,” Lazer said. “Whenever I got an award I would introduce her from the audience. A fabulous partner.”
Lazer also has a connection to jazz musician Dave Koz. He and Joyce were close friends with Koz’s parents, Audrey and Norman. “He’s like another son to me,” Lazer said.
Lazer, who enjoys dining at Oceans 234 in Deerfield Beach, has two children, son Randy and daughter Simone. Randy is in real estate in Las Vegas and Simone has been involved as a writer and producer on Broadway and currently lives in Nashville.

Q: Where did you grow up and go to school? How do you think that has influenced you?
A: I started my college education after the war at the University of Manitoba, where I got a bachelor of commerce. That was an education in the British tradition, very specialized in business. I went to the University of Chicago for my master’s in business administration. Then I got my doctorate at Ohio State University, which was the mecca for marketing at the time. That was a two-year course and I was able to get it in eight months. A few years later, I won a Ford Foundation scholarship that took me to Harvard and MIT for a year.

Q: What professions have you worked in? What professional accomplishments are you most proud of?
A: I’ve taught my whole adult life, and really appreciate all the awards I’ve gotten, but for a different reason than people might expect. By my wife doing what she did for the family, she allowed me to do my thing. So, when I got an award, that was an opportunity to have her stand and introduce her to the audience. I won the highest academic award at Michigan State, became an honorary alumnus, got an honorary doctorate, became an honorary member of the Varsity Club. I don’t know which was the best, but I was just so privileged.

Q: What advice do you have for a young person seeking a career today?
A: Don’t just go to school to get a degree, get an education. Learn how to learn, to keep learning throughout your life. Also, learn to deal with change because the situations are so different now. Companies change so rapidly. You have to adjust, adapt, look to the future and what you think is going to happen. Too many people go to college and don’t care about the grades, they want a better job. Take advantage of the opportunity.

Q: How did you choose to make your home in Boca Raton?
A: My wife always wanted to play the piano and look at the ocean. We used to live on Highland Beach and it was the same thing. When we came to this building there was a vacant unit facing A1A and we said no thanks. We had to wait for one on the ocean, and moved here in 1994.

Q: What is your favorite part about living in coastal Boca Raton?
A: I love the ocean, the ever-changing scene. And also, in this building there are three outstanding, kind people I really love. And Boca at one time had a village-type effect, but that’s gone now. It’s more like Fort Lauderdale now.

Q: What book are you reading now?
A: Battle for the American Mind, by Pete Hegseth and David Goodwin. Growing up in Canada we studied a lot of Canadian history and a lot of European stuff. Didn’t read much American stuff. But it’s about the battle for American education, how it’s failed, how we got to where we are. At Michigan State, you couldn’t be hired if you were a conservative. I lived that.

Q: What music do you listen to when you want to relax? When you want to be inspired?
A: I like classical and smooth jazz. With my wife being a classical pianist, we used to have world-class musicians coming to the house. But our relationship with Dave Koz has really helped me appreciate smooth jazz. He’s introduced me to a lot of those people. One time he played the Kravis Center and we were in the audience and he said, “My own mother and father are deceased so I want you to meet my other parents.” And he had us stand up. Such a nice young man.

Q: Have you had mentors in your life? Individuals who have inspired your life decisions?
A: When I got to Ohio State to work on my doctorate I studied with a world-famous instructor in marketing, Dr. Theodore Beckman, who was a distinguished professor. He became my adviser, my friend, and he certainly was a mentor for me. I owe him a lot.
And when I was at Michigan State the president was John Hannah. He won the congressional Medal of Honor, he was in charge of civil rights under several presidents, he was in charge of manpower during World War II, he was a giant of a man. For whatever reason he took a liking to me and let me do my thing.

Q: Who/what makes you laugh?
A: I like some of the older comics. Sid Caesar, Johnny Carson. And recently I was watching the All in the Family show and they were classics. Norman Lear recently had a 100th birthday party and Dave Koz went and said he’s still very sharp. Some of the stuff that passes for comedy now isn’t funny.

Q: Is there something people don’t know about you but should?
A: About a year-and-a-half ago the dean at the University of Manitoba asked if we could schedule a half-hour phone conversation. Two-and-a-half hours later he said, “I want you to write your memoir for the special collection.” So that’s what I’m doing now. It’s taken a lot longer than I ever thought it would.