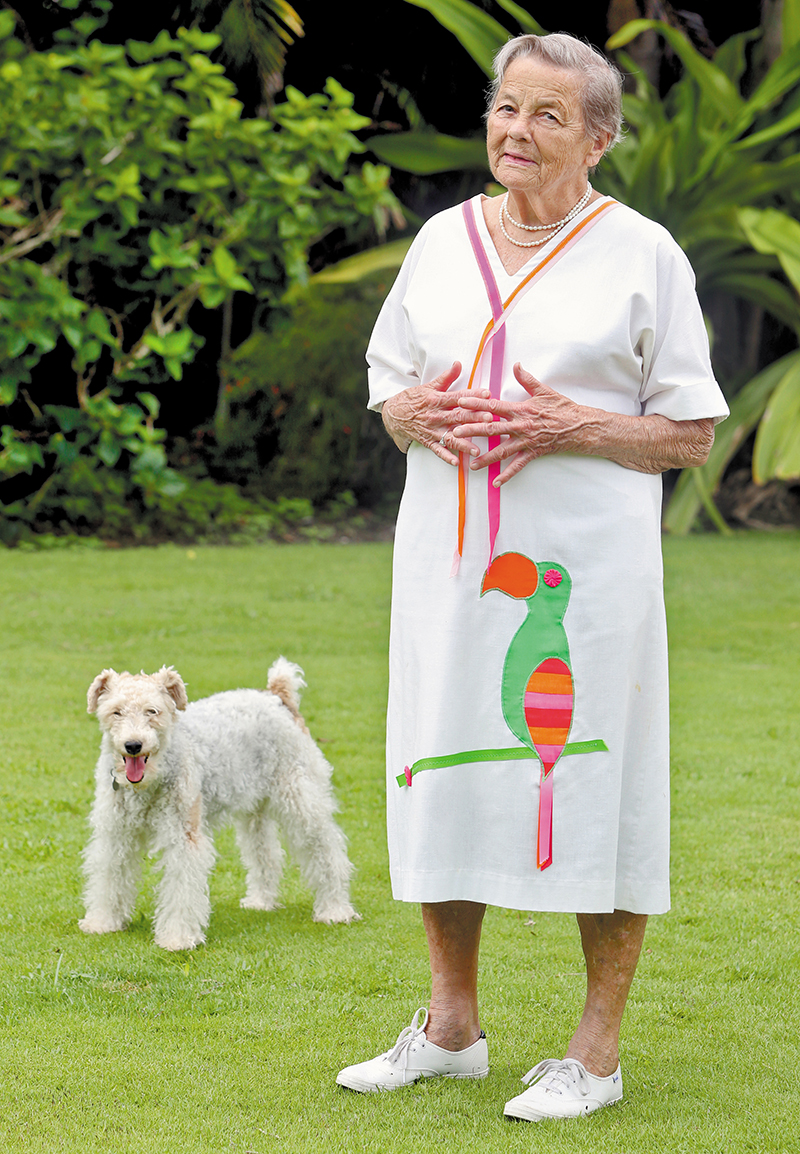 Whether you think of it as getting involved or, as she puts it, “sticking your nose in there,” Betty Bingham has always been a doer.
After finishing college and before embarking on her career, Bingham noticed a nearby hospital for crippled children and noticed that the youngest kids had no activities until they were ready to start kindergarten at age 5. Her response? She took the initiative to start a nursery school for kids aged 1-4.
At least a part-time resident of Ocean Ridge since her father bought property back in the 1950s, Bingham has been an active participant in every facet of the beach community’s life, serving as a commissioner of Ocean Ridge for 12 years, spending another five on the Planning and Zoning Board, and even today, at 89, serving on the Board of Adjustments.
She’s also been active in community initiatives, from protecting turtle nests to saving the sand dunes to improving the prospects of inland waterways for the cultivation of shrimp and oyster beds.
One of her favorite causes has been working to defeat polio.
Global data show very few new confirmed cases of polio this year. “Along with that I’m very sensitive to the need in many foreign countries for wheelchairs. Travel to India or Africa and you see people dragging themselves around on their knees. Giving them a wheelchair and seeing the smiles on their faces was worth everything you worked for. We worked hard to give out a lot of wheelchairs.”
Her charitable work goes on and on.
“I was working for every cause there was for a while,” said Bingham, who is divorced. “After a while, I’d come to my neighbor’s door and he’d say, ‘Which charity are you collecting for now?’ People need to keep giving.”
Most of her recent charitable work has been for the garden club and the Rotary Club.
The next cause she sees herself working on in the Rotary Club is trafficking, both human and sexual. “People don’t realize how bad it is,” she said.
She owns 200 acres along the North Toe River in North Carolina and is developing ecotourism on it.
“We have lots of turkeys and deer and coyotes, and we are re-establishing a goat that had been the original goat of North America and had become extinct in this part of the world. The goats were found on an island off the coast of Australia. It’s speculated that Captain Cook, when sailing in the South Pacific, would pick up and drop off livestock as he went around the world. He probably dropped the goats off there. A lady from Massachusetts found them 20 years ago and started breeding them. We have 18 and I believe there are about 70 in the U.S.”

Q. Where did you grow up and go to school? How do you think that has influenced you?
A. I was born in Baltimore in 1929, so it could be said it was my arrival that brought on the Great Depression. When I was young our summers were spent at Gibson Island, where I learned how to swim, sail and catch Maryland blue crabs.
My family moved to Charleston, W.Va., in the 1930s, and I did a lot of my growing up there. One of the major events each year was seeing the Ringling Brothers Circus come to town, when we would watch the elephants working to set up the tents, as well as the paddlewheel steamboat coming down the Kanawha River with its minstrel shows.
I started school in a one-room schoolhouse for grades one through six, which was closed shortly after I enrolled. After my public school education took me through grade 10, I spent my last two years boarding a train to Massachusetts to attend Walnut Hill boarding school.
After my two years at Walnut Hill I moved on to Sweet Briar College outside Lynchburg, Va. I was awarded a bachelor of arts in math and science, though my father said it should have been for bridge and riding.

Q. What professions have you worked in? What professional accomplishments are you most proud of?
A. My first position was in banking; I was trained by the Shawmut Bank. I spent a few years there working my way up to a bank officer. I quit when I got married, but no matter where we were after that I could always get a job in banking. I worked at three different banks.
Much of what I’ve accomplished has involved my family. I married Bill Bingham in 1957 and we had three boys, so I was kept very busy as a den mother for Boy Scouts, running horse shows for the 4-H Club, setting up a baseball league and for four summers serving as a counselor at a day camp. All my children went to the camp where I was kept busy teaching swimming, riding and sailing.
When I moved to Florida I thought about being a banker but decided to become a travel agent instead. That’s when Lantana Travel came into my life. My father opened two banks and three travel agencies after he retired, so when I came down I took over Lantana Travel, where I worked about 14 years until my older son came down with ALS.

Q. What advice do you have for a young person seeking a career today?
A. Do what you really like and believe in. Work hard and listen. But then move on if you don’t like the way the operation is being run. Being a team player will get you a good recommendation for your future endeavors.

Q. How did you choose to make your home in Ocean Ridge?
A. I like small towns where everybody knows everyone and is working together. In the late ’50s my father bought a house at 1 E. Ocean Ave. Because my children had problems with tonsillitis, we started visiting in the month of February, when they could attend Gulf Stream School. They became very involved with the turtles, saving the sand dunes, dealing with the different animals and so on. I was attracted to Ocean Ridge because it was a small town where people spent a lot of time outside. I always liked to be outside and active.
I moved to Florida in 1971, and, due in large part to my love of the ocean and snorkeling, settled in Ocean Ridge with a strong desire to keep it a small, friendly town.

Q. What is your favorite part about living in Ocean Ridge?
A. Working to address the challenge of preserving the small, quiet nature of the town. We’ve had to ward off people who wanted to make one of the last natural wood hammocks in South Florida into a parking lot, or developers who would fill in the mangroves on Corrine Street for another high-rise.
What a quiet retreat this has been: manatees, owls, raccoons and all the rest. The dunes are both our pearls and our protection. Then you have the Briny Breezes project that was proposed, and the reef ball project, and transplanting oyster beds. So much goes into keeping nature working as it should.

Q. What book are you reading now?
A. I have dyslexia, which makes me a slow reader, so I read for information and not for enjoyment. I like historical novels and autobiographies. I picked up a biography of the Soviet leader Vladimir Lenin the other day.

Q. What music do you listen to when you need inspiration? When you want to relax?
A. I like a wide variety of music, from big bands to bagpipes to light opera to Tchaikovsky. I like to listen to marches when I want to feel energetic.

Q. Do you have a favorite quote that inspires your decisions?
A. “Those who do not know history are doomed to repeat it.” — Edmund Burke. That’s true of any country.

Q. Have you had mentors in your life? Individuals who have inspired your life decisions?
A. My grandparents and my parents were great mentors. We used to have very animated conversations. I came from a family of debaters and I did debate at one time. I can defend my statements as a result of that, even if I know I’m wrong.

Q. If your life story were made into a movie, who would play you?
A. Shirley Temple. She was a good person, had very high principles, was hardworking and carried through on what she believed was right and wrong.