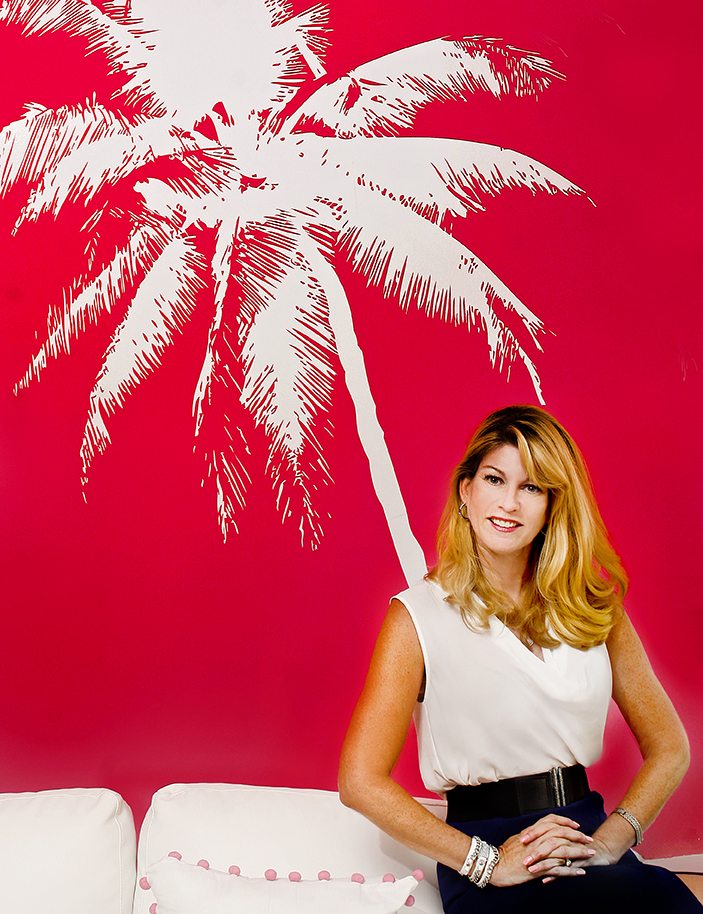 Some people count sheep at night, but Annie Davis, owner of Palm Beach Travel in Manalapan, goes to bed thinking about the logistics and routing of her clients’ trips.
“It helps me sleep,” said Davis.
Whether someone wants to rent out an entire private island in the Caribbean, visit Antarctica, take a private tour through Italy on a Harley-Davidson or organize a multi-generational family vacation, Davis can make it happen.
“The majority of our business is luxury travel,” Davis said, “but we also book flights to New York on JetBlue.”
Palm Beach Travel was recently named the “agent of record” for Etihad Airways, the national airline of the United Arab Emirates, which means it can make bookings on the airline’s new luxury airliner that flies out of New York.
The upper deck of the wide-body Airbus A380 features eight private “apartments,” including The Residence, an exclusive three-room suite with a living area and shower. The cost of The Residence between New York and Abu Dhabi is $32,000 each way.
“It’s not for everybody,” said Davis, “but it’s an exciting part of our business, because it’s unique.”
There’s only one Residence per aircraft, and there are only three in the world.
The destinations most requested by Palm Beach Travel clients lately are Iceland, New Zealand, Seychelles, Dubai and Hawaii, Davis said.
Palm Beach Travel opened just three years ago, and Davis plans to expand its square footage in the Plaza del Mar shopping center by almost double early next year. The boutique agency, which is part of the Altour division of American Express and specializes in Platinum and Centurion travel, also has a new cruise department that has “taken off,” Davis said.
Davis travels about 120 days a year doing research and looking for ways to improve the travel experience of her clientele.
“I don’t think any other travel agency in this area can say that they’re on top of the travel trends like we are,” Davis said. “We can tell you the pitch level in a lie-flat seat of every airline.”
When Emirates started its new nonstop flights from Orlando to Dubai, Davis asked for complimentary round-trip limousine transportation from Palm Beach County to Orlando for her clients flying in business class and first class. And she got it.
Davis, 45, who resides with her husband and two sons in Hypoluxo Island, is the world’s only American Express Travel Insider for the British Virgin Islands, and one of two for Dubai. She was a finalist for the 2016 Women of Worth, Entrepreneur of the Year award, and was recently nominated for the 2016 Executive Women of the Palm Beaches Women in Leadership Award.
She is a donor and volunteer of the Make-A-Wish Foundation, the organization that sent her family on a trip to Virgin Gorda in the British Virgin Isles—chosen as a destination by her brother after he was diagnosed with leukemia as a child.
“It’s my favorite place in the world,” Davis said. “That was something that I always feel I need to give back to people so they can have that same experience.”
Along with her coworkers, Davis is also a donor and volunteer of Give Kids the World, which created a hotel in Orlando with its own nursing care and amusement park, specifically for kids visiting Disney World through the Make-A-Wish program.
When it comes to travel, Davis said, “I have what we call ‘jet fuel in the blood.’ This is not a job. It really is a way of life.”
— Marie Puleo

Q. Where did you grow up and go to school? How do you think that has influenced you?
A. I was born in Cincinnati, Ohio, and lived there until I was 12. I went to All Saints Catholic School. We lived in a great family neighborhood filled with kids. I was blessed to have had an early childhood spent playing with friends from the neighborhood, going to summer camp and our local amusement park.
I had two younger brothers, Michael and David, with whom I was very close. Tragedy struck our family just after we moved to California when I was 12. My brother Michael was diagnosed with leukemia. My loving parents worked tirelessly to help my little brother. Sadly, he passed away at age 19, just after we moved to Michigan.
Because of this, I grew up quickly. I had a lot of responsibility, as the oldest sibling. This has influenced my life greatly. I have an incredible amount of emotional strength, I hold my husband and children more closely and I live every day to its fullest.

Q. What professions have you worked in? What professional accomplishments are you most proud of?
A. I have always been in the travel industry. I was a founding member of two airlines, Jet U.S. in Detroit, Michigan, and Midway Airlines in Chicago. I was an inflight supervisor and oversaw our flight attendant division. As an inflight supervisor, I also had the opportunity to fly as a flight attendant. On one of these flights, I met my future husband.
The tragic events of Sept. 11 changed my career path. Midways Airlines closed its doors on the very next day. I found myself six months pregnant, with no job and an uncertain career path. I took this opportunity to complete my college degree and start a vacation rental company in the Florida Keys.
It was difficult to balance school, work and care for my family. I could not have done this without the support of my fabulous mom and supportive family.
Once my children were established in school, I joined American Express as an exclusive Centurion travel agent. Our team planned travel and lifestyle experiences for the top 10 percent of the wealthiest Centurion cardholders.
American Express announced in 2013 that it was closing its storefront travel agencies. I saw a need for a boutique storefront travel agency in Manalapan. With the blessing of American Express, I opened Palm Beach Travel, a division of Altour Travel, American Express in Plaza del Mar. I also brought with me the top agents from American Express.

Q. What advice do you have for a young person selecting a career today?
A. Don’t let failure stop you. Use it to inspire you to work harder. The first airline I started at lasted only a few days. From that experience, I had two choices. The first was to choose another career path, the second was to try again. I am very happy I tried again.
When 9/11 happened, I didn’t let that stop me. I tried again. When American Express said they were closing their storefront travel agencies, I didn’t see that as failure but as an opportunity to open Palm Beach Travel.
Failure is only an opportunity to do something you love over again, only better.

Q. How did you choose to make your home in Hypoluxo Island?
A. Almost 20 years ago, I was filming a documentary for PBS about flight attendants on a flight from Palm Beach. There was a good-looking passenger on that flight who did everything he could to make me look good on camera and did a bit of flirting. That passenger ended up being my future husband, Brent.
Brent, a lawyer, was a longtime resident of Hypoluxo Island. We married in 2000 and I moved from North Carolina to the island. We just celebrated our 16th wedding anniversary!

Q. What is your favorite part about living in Hypoluxo Island?
A. I can walk or ride my bike to work. I also think it is a wonderful place to raise a family.

Q. What book are you reading now?
A. I am an avid reader. The book I am currently reading is The Path Between the Seas, by David McCullough. My family and I are traveling to the Panama Canal and we all are reading this book. I highly recommend it.

Q. Have you had mentors in your life? Individuals who have inspired your life decisions?
A. My father, Mike Heglin. My dad is the humblest person I know. He was an early pioneer in the laser industry and is a published author. His career and family values have shaped my life.
He began his career as an engineer working with lasers at University of Cincinnati developing laser eye surgery. He then went on to develop lasers for GE in their aircraft division. He also worked with NASA and many other notable companies. He still works in a small corner of his garage developing laser technology that shapes the future of our society.
He and my beautiful mom, Suzanne, have been married for nearly half a century.

Q. If your life story were made into a movie, who would you want to play you?
A. Elizabeth Banks.  She is funny, charming and blonde.

Q.  Is there something about you people don’t know, but should?
A. I am a good matchmaker. One of my best friends is Emi Ebben from Jewelry Artisans. My husband’s best friend is a great guy named Tim. We set them up on a date many years ago. They just celebrated their 12th wedding anniversary!