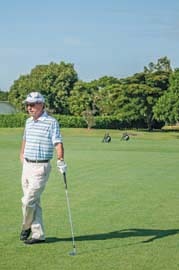 Craig Harmon has stepped on board as director

of golf instruction at the Seagate Country Club.

The Seagate Hotel & Spa in Delray Beach has for the past year or so sought to increase the visibility of its Seagate Country Club golf course. It’s renovated the original Joe Lee design, including installing Celebration grass on the fairways and TIF Eagle grass on its greens.

Now the Seagate has gone a step farther — perhaps more than one — in hiring legendary golf professional Craig Harmon as its director of instruction.

The Harmon name is as synonymous with golf as Derek Jeter’s name is to the New York Yankees. Craig Harmon’s father, Claude Harmon Sr., was head professional at Winged Foot Golf Club in Mamaroneck, N.Y., and the last-ever club professional to win a major championship — the 1948 Masters. Each of the Harmon brothers — Craig, Butch, Bill and the late Dick Harmon — have been ranked among Golf Digest’s Top 50 teachers.

Butch Harmon might be the best known of the brothers — he’s been swing coach to Tiger Woods and counts Phil Mickelson among his pupils on the PGA Tour. But Butch will tell you that Craig is the most like their father — a firm believer in golf fundamentals — on the lesson tee.

Harmon continues the Seagate’s ties to Rochester — Seagate Hospitality Group Chairman E. Anthony Wilson is a successful real estate developer in the city and Jeff Sluman, the 1988 PGA champion, is a Rochester native and member of Seagate Country Club.

“I know Tony Wilson very well and I’ve known Jeff Sluman (now a regular on the Champions Tour) since he was 18 years old,” Harmon said. “So when I retired from Oak Hill (in 2013) I was approached about becoming director of instruction and helping out at Seagate. It’s a first-class operation with the hotel and spa and course.’’

Harmon isn’t new to South Florida. He’s been teaching for the past several years at the exclusive McArthur Golf Club in Hobe Sound. “I would be there through March and go back to Oak Hill in April,’’ he said.

But after 42 years as being the go-to man at Oak Hill for teaching and golf operations, Harmon decided it was time just to focus on the teaching end. His only inventory, Harmon said shortly after he announced his retirement, would be “between my ears.’’

“I don’t have all those other responsibilities,’’ said Harmon, who is recuperating from recent hip surgery. “Although it was fun, it was time just to teach.’’

“I can’t wait for people to start coming down on hotel packages. I think that’s going to be very cool,’’ Harmon said. “And for guys who want to do a ‘guys’ trip, it’s pretty cool to stay at the Seagate and go to the spa and beach club and play 18 holes at the country club.’’

It’s even better when you get a lesson from Craig Harmon.