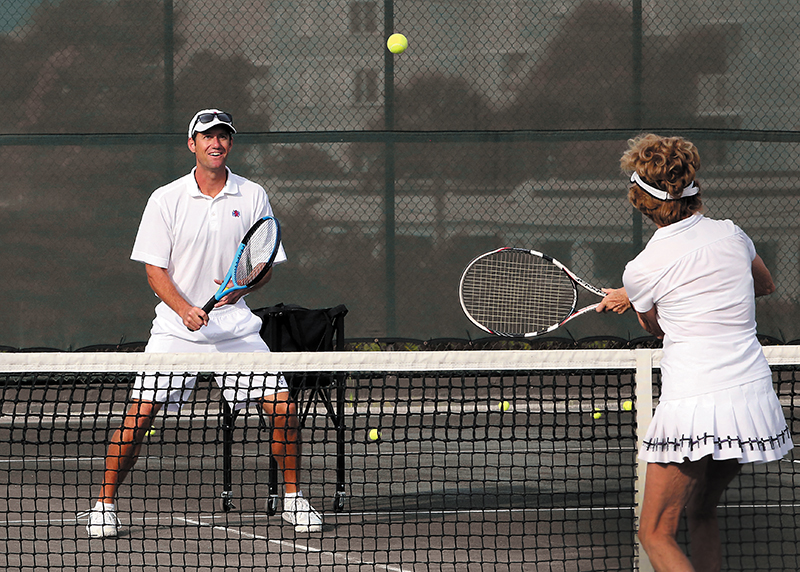 David Bent didn’t know anything about croquet when St. Andrews Club in Delray Beach installed its 105-by-84-foot croquet lawn in 1998. He became so proficient at it in the ensuing years that between then and his retirement from the position of St. Andrews tennis and croquet pro last year, his ranking rose as high as second in the United States and 30th in the world.
Now St. Andrews members hope the new man in that job, Jackson Moore, can even approach that level of proficiency.
“David has told us that he is going to make Jackson a world-class player,” said Peter Lowenstein, who as head of the St. Andrews tennis committee recommended Moore for the position.
Moore, 29, who started in October, does have a solid background in tennis, having played collegiately at Georgia State and Florida Gulf Coast before spending the past few years teaching in his native Sarasota-Bradenton area, most recently at Gasparilla Inn in Boca Grande.
Moore spent his past four summers at the Nantucket Yacht Club in Massachusetts, where Lowenstein happens to be a member.
“I was asking around and the head man up there said he would be terrific,” Lowenstein said. “I can tell you, the job he’s done up there is grueling. He’s on the tennis court 10 hours a day, six days a week, so he’s used to hard work.”
Moore said he was “curious more than anything” when told the St. Andrews position would involve croquet as well as tennis.
“I’ve seen it played at Gasparilla; they play at a good level over there. But the only times I ever watched was when I was filling water jugs or things like that. But I’m enjoying it. It’s a mind game out there,” he said.
Playing catch-up has involved reading a book Bent gave him on the subject and watching YouTube videos. He also has often traveled up to the National Croquet Center in West Palm Beach, where Bent spends much of his recreational time, and played alongside him.
“To watch David go through the six-wicket game — it boggles my mind to see what he can do,” Moore said. “There’s a lot going on, a lot of strategy.
“I’m taking it one day at a time, but I’m enjoying it.”
Moore said that while he’s spending more time with croquet at the moment, he perceives the position as a 50-50 split and is working to expand the tennis program.
One innovation is a program called “Hardcore Tennis,” an hourlong session that involves 45 minutes of fitness work followed by 15 minutes of tennis.
“He’s working with Gulf Stream School to get the children involved,” St. Andrews General Manager Robert Grassi said. “Sports activities is something all the members are interested in.”
“He’s working out very well,” Lowenstein said. “He’s willing, enthusiastic, and everybody is very pleased with him.”