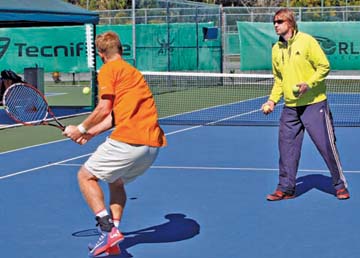 For the uninitiated, tennis (except for doubles) is rarely viewed as a team sport. But in reality, the majority of the game’s most successful players have had a strong coach in their backgrounds. Andre Agassi and Monica Seles, for example, each rose to the top with the help of legendary coach Nick Bollettieri; Boca Raton’s Andy Roddick became one of the world’s top players under the guidance of Brad Gilbert.
Meet the team of Igor Bobkov and Timur Ismailov. The duo certainly isn’t in the “household name’’ category of say, Gilbert and Roddick, but each is working hard in Delray Beach to establish himself in the world of professional tennis.
Actually, Bobkov already has a solid reputation as a coach in his native Ukraine, where he has coached seven players to “Master of Sport” titles in the past 20 years. Bobkov, who has coached with Alex Demidenko — the former No. 1-ranked singles and doubles player for the Soviet Union — discovered and coached fellow Ukrainian Kateryna Bondarenko, who has won more than $2 million in prize money since 2000, as well as developed the career of Russia’s Nadeza Petrova, who has won 13 WTA titles and more than $12 million prize money in 15 years on the pro circuit.
Teaching out of ProWorld Tennis in Delray Beach, Bobkov’s current protégé is Ismailov, a hard-hitting 20-year-old from Tashkent, Uzbekistan, who hopes to qualify for the Delray Beach Open, Feb. 13-15 at the Delray Beach Tennis Center. Ismailov, a member of Uzbekistan’s 2014 Davis Cup team, has been ranked as high as No. 504 in the ATP world ranking and currently is No. 522.
“Tim is a guy who can easily be in the Top 100,’’ said Bobkov, who in the 1980s was ranked the No. 10 singles player in the Soviet Union and No. 5 in the Ukraine. “He’s a hard worker with a good all-around game.’’
Undoubtedly Bobkov, 48, sees a lot of himself — and what could have been for him — in Ismailov. In the ’80s, there were essentially no professional sports in the Ukraine — then part of the Soviet Union. Players with world-class potential were denied most opportunities to compete internationally for fear they would defect, as Czech star Martina Navratilova did in 1975.
Bobkov, whose 18-year-old son lives in war-torn Ukraine, shrugged slightly when he thought about those lost days.
“I think I would have done pretty well,’’ he said.
These days, however, Bobkov is focusing on Ismailov, whom  he first saw play two years ago in Uzbekistan. When Ismailov came to Delray Beach two months ago to live with a family friend and hone his tennis game, he contacted Bobkov to come from China, where he was teaching, to Delray Beach.
As sports synchronicity works, Bobkov’s friend, psychologist Dr. Ira Schwartz, lives part-time in Delray Beach. Bobkov met Schwartz and his wife, Anne, a few years at the Brooklyn (N.Y.) Racquet Club and has served as the couple’s tennis partner and teacher.
“Igor is an incredible tennis player,’’ Schwartz said. “He’s also very knowledgeable and has a wonderful talent for being able to relate to students and teach things in a gentle way.’’
What Bobkov is trying to relate to Ismailov, is more of the power game that was popular in men’s tennis when he was growing up.
“We’re working a lot on serve and volley,’’ Bobkov said. “Not that many players play a serve and volley game anymore. Tennis has become a little boring with all the baseline play. It can be a more exciting game and I think Tim can be an exciting player.’’