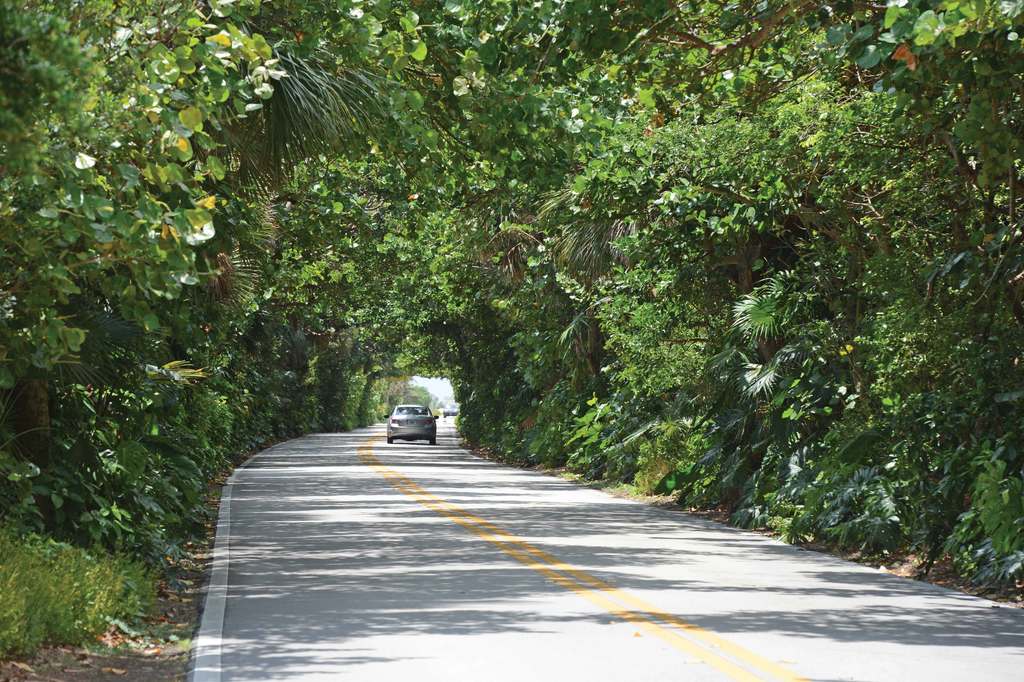 A tunnel of trees surrounds State Road A1A as it winds through the Ziff estate in Manalapan. File photo/The Coastal Star

For close to three decades Manalapan and the Ziff family have worked together to preserve a largely pristine, 15.6-acre parcel that has defined with its natural beauty the town’s southern entrance on A1A.
The town has been willing to allow the family exceptions to codes and building rules — variances that recognized the historic and aesthetic contributions of the property known as Gemini. In return, the Ziffs pledged to keep the family’s land as it is, in one unbroken waterfront parcel, and to resist the temptation to divide it into lots for development.
That longtime understanding between town and family came to an end on Dec. 10 when the commission unanimously voted to allow a total of four lots on the property. 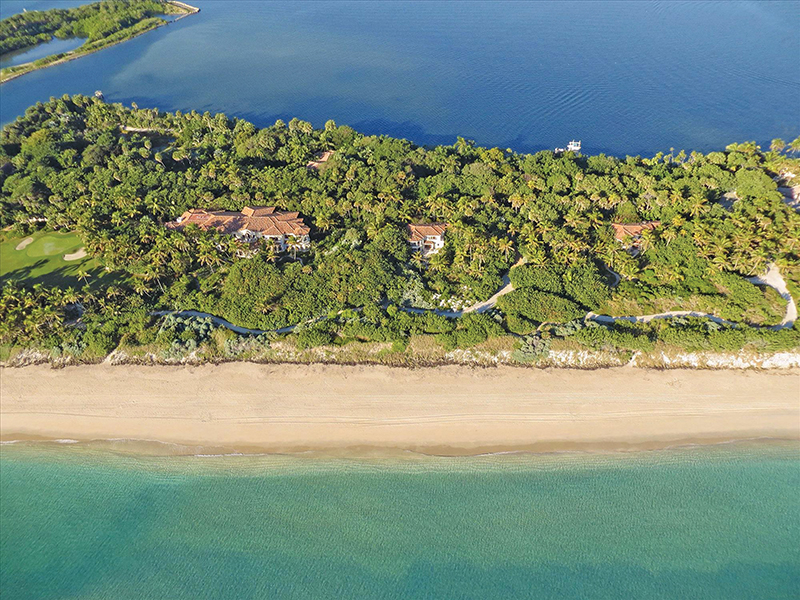 John Randolph, the family’s attorney, told the Town Commission that despite trying to find a buyer since 2016, the Ziffs have been unable to sell the property as a whole. Originally listed for $195 million, the asking price now has fallen to around $165 million, a number that still would be a record-breaker for Palm Beach County real estate.
Randolph told commissioners that for the family to sell the property, it had to be divided into smaller parcels.
“This property as you know has been on the market for about five years without us being able to obtain a purchaser,” he said. “Our purpose here is not to subdivide it for the family but to subdivide it to make it more attractive for a buyer.”
Randolph asked the town to divide the largest parcel on the northern end of the property into three separate lots.
“If we would start from scratch and level everything we would be entitled to eight lots under your zoning code,” he said. “But we feel that would not be in the interest of the town or the family. What we propose here we feel is a win-win for everybody.
“I just can’t think of a better way to preserve the property.” 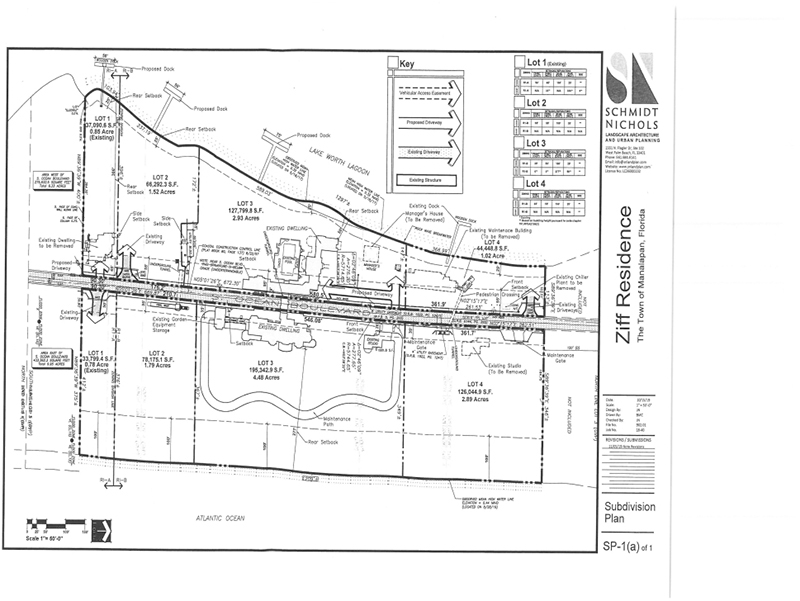 The approved subdivision keeps the existing main home, but allows the removal of outdated support structures. The Ziffs hope the room for new development will entice buyers. Photo and rendering provided

Mayor Keith Waters was less enthusiastic. He said it was “a really complicated decision” for the commission because of the potentially troublesome precedent that might be set, one that could undermine the town’s code.
“We are being asked something we were told would never be asked,” Waters said.
Joining Randolph in the appeal was Dirk Ziff, 54, the eldest of three sons of billionaire publishing magnate William Bernard Ziff Jr. and an heir to the family fortune built on magazines such as Car and Driver and PC Magazine.
Dirk Ziff said he never expected to come to the town and ask for permission to break up the property — “it never occurred to us at all” — until efforts to sell it foundered.
“No one is going to feel sorry for our family,” Ziff said about the marketing failure. “We’re a very fortunate family. But it’s uncomfortable coming forward. We want clarity. We want resolution.”
Commissioner Stewart Satter, who has developed properties in Florida, reminded Ziff that the town had given the family “preferential treatment” over the years in return for the promise not to divide the land. Satter asked whether the problems selling it as a whole weren’t “all about price.” Why not drop the listing number lower?
Ziff told the commission it was difficult to find a buyer who was willing to do the preservation work, all the maintenance and pay all the taxes that Gemini demands. “We tried really hard for five years,” Ziff said.
Satter asked if the Ziffs aren’t “trying to maximize value.”
“Of course that’s true,” Ziff said. “There’s just an economic reality here that I’m not ashamed of.”
Waters said the town wants to try to preserve the canopy — the tunnel of trees reaching across State Road A1A.
“Dozens and dozens of people are asking about that canopy,” Waters said.
The commission voted 5-0 to approve the subdivision and allow four lots. As part of the approval, the town will require several structures to be torn down, golf holes to be removed and much of the land returned to its natural state. A provision that would encourage preserving the canopy was also approved, but enforcing preservation will be difficult, commissioners agreed.
Officials say demolition and development are likely at least a couple of years away.

In other business:
There will be no Manalapan election in March, but one commissioner will be replaced.
Clark Appleby is leaving because of term limits. Taking his at-large seat is former Commissioner Chauncey Johnstone, who qualified and was unopposed.
Vice Mayor Simone Bonutti and Commissioner Richard Granara also were unopposed and are returning.