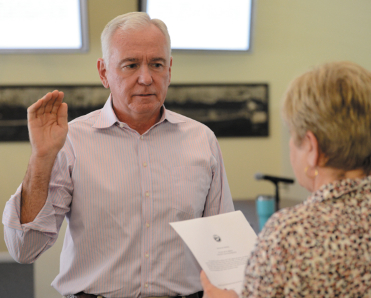 Richard Granara takes the oath of office after his appointment to the Manalapan Town Commission. He will serve the year remaining on the term of Monica Oberting, who moved away from town. Jerry Lower/The Coastal Star

Manalapan commissioners are exploring the possibility of buying the vacant BB&T Bank building at the northeast corner of Plaza del Mar as a new home for the town’s expanded Police Department.
Town Manager Linda Stumpf told the commission during its Feb. 26 meeting that the property, covering roughly two-thirds of an acre, went on the market for about $1.6 million after the branch closed and BB&T merged with SunTrust Banks, Inc.
Commissioners unanimously agreed to seek two appraisals for the property to consider whether negotiating a deal makes sense.
“I’m interested at the right price,” Vice Mayor Peter Isaac said.
A service station stood on the site decades ago, raising the possibility that old gasoline tanks or other environmental problems may be lurking beneath.
The two appraisals are a first step, Town Attorney Keith Davis said, and then commissioners can seek more information as part of due diligence if they decide to proceed with negotiations.
Manalapan expanded its Police Department from eight full-time officers to 12 last year as part of a response to a series of auto thefts. The department also moved its dispatch center from the guard shack on Point Manalapan to Town Hall. A move to the bank site could help provide the space to relieve the department’s growing pains, officials said.
Stumpf said she hoped to have the appraisals for the commission’s review within weeks.
In other business:
• Palm Beach developer Jeff Greene wants to flip the housing pattern on State Road A1A at Manalapan’s southern entrance.
Greene owns the three lots that are adjacent to Boynton Beach Inlet and divided by the road, with a house on the west side of the thoroughfare. He wants to build three new homes on the eastern, oceanfront side of the properties and use the western lots for docks, decks and cabanas.
Greene’s attorney, Ken Kaleel, said the change is logical because “the land mass is greater to the east than to the west.”
A zoning change would affect only seven lots in the town, Kaleel said, and the other owners in the small zone support the move. He said the plan would enhance the “arrival view” when people enter the town from the south.
The commission voted 4-1 to refer the proposal to the town’s Zoning Commission for review. Commissioner Jack Doyle voted against the referral, arguing that new construction on the east side needs sea walls, which the state no longer permits.
“We’re supposed to be forward looking,” Doyle said. “I’m talking about a future disaster here.”
Mayor Keith Waters said even if the town decides to change its code, Greene’s plan would still need state approval to go forward, which could take many months.
“This is a marathon,” Waters said. “It’s not going to happen in one or two meetings, I promise you.”
• Commissioners unanimously approved the appointment of Richard Granara to serve out the year remaining on Monica Oberting’s commission seat, which represents the Point. Oberting, who joined the commission in 2017, sold her home and moved out of Manalapan recently.
Waters said Granara has a background in real estate and construction, “a great deal of experience” that will help the commission. Granara has served on the town’s Zoning Commission for four years.
It was the last commission meeting for Isaac, who after six years on the panel became the first elected official in the town’s history to be ousted because of the term limits voters approved in 2013.
Isaac will be replaced this month by Stewart Satter, who qualified for the at-large seat in the March 12 election and was unopposed.