The lushly landscaped 15.65-acre Ziff estate and the sanctuary known as Bird Island are located just north of the Boynton Inlet. The mature landscaping is the result of decades of work in native plant restoration and conservation efforts. A golf practice area is on the east side of A1A. Google Map image

Billionaire internet entrepreneur James Clark is on the verge of becoming the favorite son of Manalapan, where his stature has risen in recent days.
“We will welcome him with open arms,” said Mayor Keith Waters. “We’re looking forward to getting to know the family. They will get a warm greeting from Manalapan, that’s for sure.”
Why such an outpouring of affection?

Clark, a founder of Netscape and a half-dozen other influential tech companies, is widely believed around Manalapan to be the mystery buyer who paid $94 million last month for the storied Ziff estate.
Waters and other town residents say they are delighted that Clark is taking over what many townspeople believe is Manalapan’s signature property.
A lush, 15.65-acre estate that stretches from the Atlantic to the Intracoastal Waterway at Manalapan’s southern entrance, the Ziff land is an exceedingly rare remnant of Florida’s distant past.
“I don’t know anything like it on the East Coast,” Waters said. “It is certainly unique.”
Until recent weeks, Manalapan had resigned itself to losing the property to development. A year ago, Ziff family heirs petitioned the Town Commission to divide the estate into four lots to expedite sales. Commissioners grudgingly said yes.
The family had tried for six years to sell the estate as a whole, first listing it for $195 million, then steadily dropping the price to $115 million last year with Sotheby’s International Realty. There were no takers.
Then abruptly on March 8, an entity called The 2000 S. Ocean Trust appeared on Palm Beach County courthouse records, showing a deed transfer on the land for $94.17 million, along with a separate recording of a $200,000 sale for nearby, uninhabited Bird Island. Because commissions and other costs often are omitted from courthouse filings, it is likely the total sale price was over $100 million.
Someone like Clark is exactly what people in Manalapan were looking for — a single buyer who takes on the whole Ziff property, someone who appears intent on living there, and above all, someone who isn’t a developer.
“The buyer doesn’t want his name disclosed right now,” said a person close to the Ziff family. “That’s what they’ve told us. But we understand the estate won’t be divided.”
Selling the land as a whole negates the agreement the commission made with the Ziffs last year to subdivide it, and anyone who makes that happen is going to be very popular in Manalapan.
“We were caught totally by surprise,” Town Manager Linda Stumpf said. “No one saw it coming. But commissioners are extremely pleased to have a sale like this — whoever the buyer is.”
Multiple sources in Manalapan identified Clark as the buyer but declined to comment until the deal goes public. Neighbors and officials say they’ll wait.
West Palm Beach attorney Ronald Kochman is listed as the trustee for the sale. Kochman declined to discuss Waters’ comments about the buyer or other details of the sale: “We do not comment to the press,” he said in an email to The Coastal Star.
Waters said the town had heard from “a couple developers” in recent months who were interested in building separate projects. He says he believes Clark intends to maintain the property as a family residence.

The hope is the striking canopy of trees draping over State Road A1A will continue to grow there too. 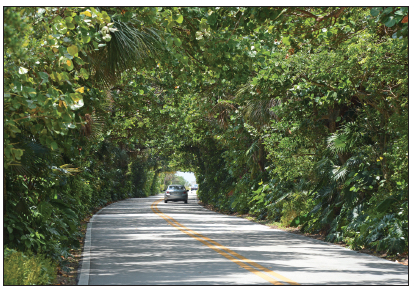 The view of the Ziff estate that most people see is of the tree canopy over State Road A1A. The estate straddles the highway. Jerry Lower/The Coastal Star

“We are very, very happy to have this kept as a single property,” Waters said. “It is unique to the character of our community. As far back as I remember coming to Florida, I remember driving through that canopy.”
Clark, 77, is no stranger to big-ticket deals. He sold a 5-acre ocean-to-lake estate in Palm Beach for about $90 million in 2018 after originally listing it with Sotheby’s for $137 million two years before. A relatively quiet off-the-market transaction, it was — like the Ziff deal — minimally recorded in public records.
Waters said he has “crossed paths with Clark” several times in the past and believes the new relationship between him and the town “will work out very well.” Manalapan, the mayor said, “is a little quieter option than Palm Beach.”
Besides founding Netscape and helping to develop its web browser, Clark had a hand in the development of myCFO, WebMD and Silicon Graphics Inc. Forbes magazine lists his net worth as $3.4 billion. He is married to Kristy Hinze Clark and has four children.
The Ziff estate has 1,200 feet of ocean beach and another 1,300 feet along the Intracoastal. It has a main house, a guest house, manager’s house and two ocean cottages — totaling some 33 bedrooms, 34 bathrooms, 13 powder rooms — with a couple of golf holes. It was originally known as Gemini — Latin for “twins” — because its layout spans both sides of A1A.
Publishing magnate William B. Ziff Jr. and family bought the estate in the 1980s and have preserved a botanic garden with 1,500 species of tropical trees and plants. For a time decades ago, it was considered the most expensive residence in the country.
“No one is going to feel sorry for our family,” Dirk Ziff, heir to the estate and eldest of the three sons, told the Manalapan commission a year ago, lamenting the difficulty of finding a single buyer and requesting permission to divide the property. “We’ve tried really hard to sell it. “We’re uncomfortable coming forward. We want clarity. We want resolution,” said the 56-year-old scion. “There’s an economic reality here that I’m not ashamed of.”