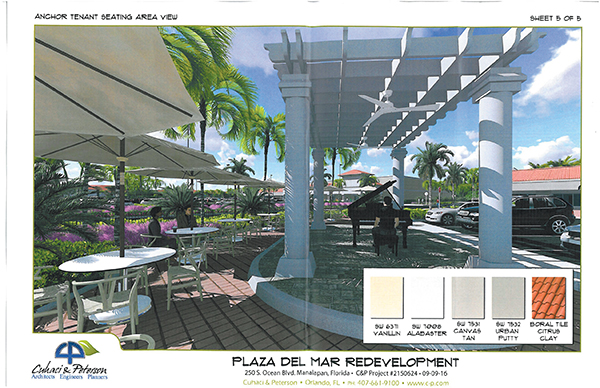 An outside seating area and pergola are part of the Plaza del Mar supermarket site plan.

Manalapan’s Architectural Commission and the landlord for Plaza del Mar have agreed on the final design details for renovating the center, clearing the way for construction of a new Publix supermarket to begin next year.
During an Oct. 19 meeting with the town’s Architectural Review Board, representatives of Kitson & Partners said their project was designed to revive the languishing shopping center without causing traffic problems or annoying neighbors.
Emily Brown, project development manager for Kitson, said that even with the 28,000-square-foot Publix, the center’s total retail space would be reduced by about 20,000 square feet and the number of parking spaces increased.
“We are rebuilding a smaller version of what exists today,” she told the commissioners.
Plans include an outside seating area with a pergola in front of the supermarket. An 8-foot wall will run the length of the plaza behind the buildings on the south side to screen neighbors from noise, with a 15-foot wall shielding the truck loading dock. Kitson’s Matt Buehler said delivery vehicles would be rerouted behind the buildings to keep them away from pedestrians.
“This gets the truck out of the front of the property,” Buehler said, calling it a change in traffic flow that will enhance safety. He said no deliveries would be permitted before 8 a.m. or after 6 p.m.
Brown said the South Florida Water Management District has signed off on the drainage plan for the site and approved a permit.
The developers say they will work with town staff to design signs for the supermarket that satisfy residents’ requests for minimal size and lighting.
Commission Vice Chairman Ben Hanani said he liked the plan, but told Kitson to consider some cosmetic changes. Hanani requested more landscaping in front of the supermarket, arches between the portico columns instead of straight lines and shade trees instead of palm trees to cool the parking lot in summer.
Kitson agreed to the requests, and the commission voted 5-0 to approve the design, removing the project’s last significant administrative hurdle. Demolition is expected to begin early next year, with work scheduled to take most of 2017.