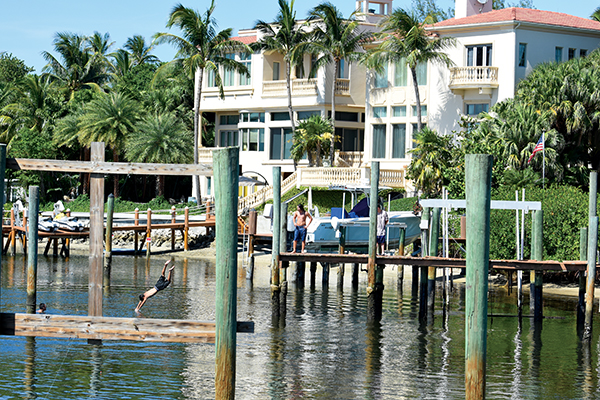 ABOVE: Police hope a new marine patrol will control rowdy behavior and trespassing onto residents’ docks. BELOW: Summer weekends often see dozens of boats moored in the shallow waters to the north of Bird Island at the Boynton Inlet. Jerry Lower/The Coastal Star 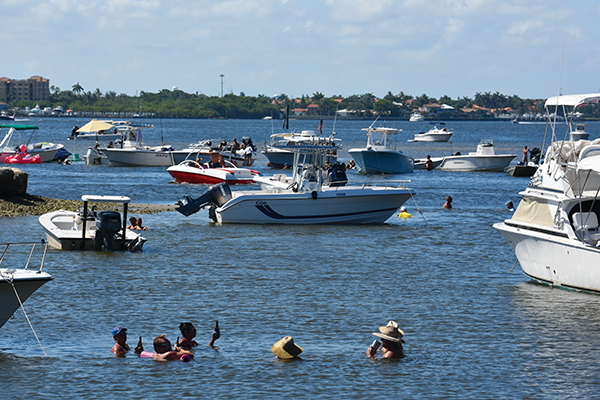 Complaints from residents along the Intracoastal Waterway in south Manalapan have increased in recent months as growing numbers of weekend boaters congregate on the sandbars around Bird Island.
Town police have a hard time reining in the loud music, underage drinking and raucous behavior the offshore partying too often brings.
That could change soon. At the town’s July 17 budget workshop, commissioners approved adding a marine unit to the Police Department that will patrol the sandbars on weekends and holidays.
Town Manager Linda Stumpf said the town intends to hire two part-time officers certified for marine duties and equip them with a 21-foot flat boat.
“They will only patrol the Intracoastal and won’t go into the ocean,” Stumpf said. “It should cost about $60,000 for the two part-time officers and another $20,000 for maintenance and operating costs for the boat.”
That boat is the best part of the plan for taxpayers. A resident with an interest in peace and quiet has offered to cover the $20,000 to $30,000 cost of purchasing one for the town.
Stumpf said the marine unit will follow a model successful in controlling sandbar partying at Peanut Island in northern Palm Beach County. Officers don’t have the authority to disperse the gatherings but can check IDs, watch for safety violations and keep the noise down.
“They will have sound meters and will be monitoring the decibel levels to enforce our noise ordinance,” she said. “Having a police presence out there should make a difference.”
Stumpf said the town is negotiating with county  officials to dock the boat at Ocean Inlet Park.
In other business:
• Commissioners are waiting on a consultant’s report to begin working on a water contract buyout agreement with the town of Hypoluxo.
In June, Hypoluxo decided to end a decades-old relationship with Manalapan and begin buying water from Boynton Beach. The roughly 550 customers affected still have three years remaining on a 10-year contract with Manalapan, however. A consultant is working to put a price tag on that obligation.
Stumpf said Manalapan wants to treat its neighbor fairly but has to make a deal that protects its water plant’s bottom line.
“I don’t know what that cost will be,” she said. “I’ve told [Hypoluxo officials] that this is a business issue and it’s not the town’s intent to lose any money in business.”
Boynton Beach officials have told Hypoluxo they will cover at least some of the buyout expenses to help make the transition as painless as possible.
Manalapan Mayor Keith Waters thinks Hypoluxo will regret leaving. “I think they will find over time that this was not the decision they meant it to be,” he said.
• The commission approved maintaining the current tax rate of $2.79 per $1,000 of taxable property value for the 2017-18 fiscal year, roughly 5 percent above the projected rollback rate that would keep total tax revenues flat. Commissioners scheduled public budget hear-ings beginning at 5:01 p.m. for both Sept. 13 and Sept. 26.