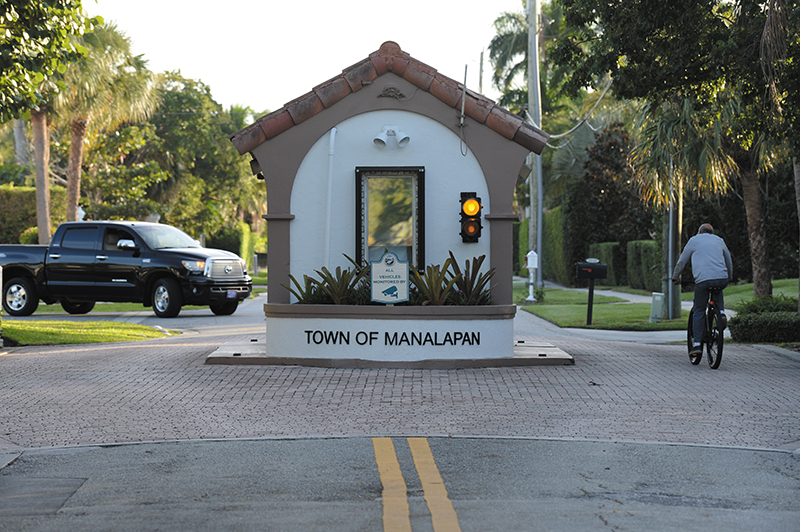 Manalapan has begun staffing the redesigned guard gate to the Point section of town with a private security firm after moving police dispatch to Town Hall. Jerry Lower/The Coastal Star

Manalapan’s plan for an ambitious expansion of its Police Department got a significant boost on Dec. 11 when town commissioners unanimously approved defined retirement benefits for employees.

After a spate of stolen cars in late 2017, Waters and the commissioners decided to expand the Police Department by 50 percent, from eight uniformed officers to 12. But Chief Carmen Mattox said the marketplace for hiring qualified officers in South Florida has grown more competitive, particularly in the wake of the mass shootings at Marjory Stoneman Douglas High School last February. Schools, sheriff’s offices and municipalities have been aggressively hiring since the Parkland tragedy.

Waters said offering defined benefits will make Manalapan competitive with leading law enforcement agencies. All of the town’s full-time employees will be eligible to participate in the plan.

In all, the town plans to spend about $630,000 more in 2018-2019 than in the previous fiscal year on police and security. Besides the new hires, officers’ starting salaries will increase about $5,000 to $51,200 a year, with current officers getting a $4,500 raise. The department has moved its dispatch operations from the gatehouse on Point Manalapan to the second floor of Town Hall. The town has hired Miami-based SPERE Security to station guards at the gate house.

Mattox said he intends to have three patrol cars on the streets at all times.

In other business, Manalapan won’t need an election in March but will get a new town commissioner anyway.

Vice Mayor Peter Isaac, who has served on the commission since 2013, is required to step down because of term limits. Town Clerk Lisa Petersen said Isaac’s replacement will be Stewart Satter, who qualified to run for the at-large seat but is unopposed.

Satter, 60, is a partner at City Light Capital, a venture capital firm. He also is director of Carnegie Hill Development Corp., a real estate company that designs and develops waterfront homes in Florida, several of them in Manalapan.