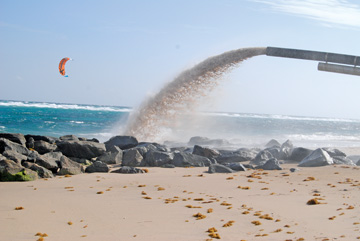 The sand transfer plant at South Lake Worth Inlet is up and running, but the new silence of its electric motor may be offset by the pounding of pilings through March, according to Manalapan Mayor Tom Gerrard.
“The plant was dead quiet from the outside,” said the mayor. The quiet motor pumps more efficiently than the old, smoky engine — and the mayor said during the town’s January commission meeting that he thinks a lot more sand will be pumped to the Ocean Ridge side. “That’s good for the county, not necessarily good for the beaches,” Gerrard said.
The Palm Beach County Department of Environmental Resources Management started reconstructing the sand transfer plant, jetties and a seawall on Bird Island in April. The construction was planned to increase the plant’s efficiency and replace damaged jetties and seawall.
While the plant is operating, construction is still off schedule and the county may be driving pilings for the jetties until March, Gerrard said. That could draw neighbor complaints, as has the noise and lights from a bulldozer that’s been in operation at the sand transfer plant to help move and pump sand accumulated while the plant was out of commission, he said. The town intended to verify that the county plans work only within normally allowed working hours.
In an effort to start building consensus on how much sand should be pumped, Gerrard said he met with Ocean Ridge Mayor Ken Kaleel.
“My hope is that it’s an agreement we have between the parties without having to convene a technical committee,” Gerard said. “The bottom line, we don’t have the final say.
“Ocean Ridge is interested in getting more sand on the beach,” the mayor said. “The county said even if it pumped 24/7, it would not satisfy the erosion of Ocean Ridge.” The county has replenished the sand in the past and paid for it, he noted, adding, “The county is interested in filling that beach with as much sand as they can.”
January’s commission meeting was the first without Town Manager Greg Dunham, who resigned late last year. The commission has started the search process and Commissioner William Berstein sorted through some 300 resumes submitted in response to advertisements, including in the Wall Street Journal and Craig’s List and government job Web sites.
Bernstein sorted out six candidates that he recommended, noting that the educational level of the bulk of resumes received was high. None of the candidates in his short list were from South Florida, although several had experience as town managers in Florida and elsewhere. Others had experience in the upper ranks of the military and private sector.
Mayor Gerrard directed commissioners to submit their own ranking of Bernstein’s recommended candidates by next meeting, and welcomed them to riffle through the stack of resumes to pull other candidates if they thought it appropriate. At its Feb. 23 meeting, the commission will select the top three candidates to be brought in and discuss the compensation package for the position.
In other business, Manalapan is expecting proposals it had solicited from Boynton Beach and Palm Beach County to outsource management of its water utility to be submitted by the February meeting.