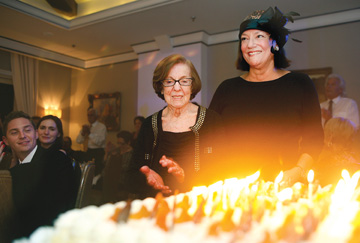 Centenarian Athena Scangas (left) is joined by her daughter Kathryn Diamond at the La Coquille Club as her birthday cake is lit with 100 candles. Photo by Tim Stepien

By Allen Whittemore
“Greek food. I ate everything my mother ever made, and she was Greek.”
So says Athena Scangas, describing the secret to a long life as she celebrated her 100th birthday on Jan. 22 with a safari gala at La Coquille Club. All of the attendees wore something with a leopard print, her favorite pattern.
“The music was Greek, the food was Greek and amid the toasts and celebrating, everyone had a great time,” according to her daughter Kathryn, who lives here with her husband, Basil Diamond, the mayor of Manalapan, and Athena.
“Mom has so much energy; she danced all night until the musician had to finally stop at 10:30. Friends and family had come from as far away as Massachusetts to wish her a happy birthday.”
“The party was like a wedding,” said Scangas,” there were so many beautiful things on the tables.”
Scangas was born and reared in Lynn, Mass., in a Greek section of town and that heritage is a strong part of her life. Her mother reared Scangas and her brother singlehandedly because her father died when she was just 5.
“Mother really showed me how to raise a family, and how to stay focused.”
Scangas met her husband, Paul, from the same part of town, and together they built the West Lynn Creamery into a booming family business.  Paul Scangas was later named “Massachusetts Man of the Year,” a fact Scangas still is very proud to share.
“We were married during the Depression and did not have a car for 13 years, so we went everywhere in the milk truck. He was such a smart businessman, but such a kind person as well.”
During WWII, Scangas volunteered with the Red Cross and spent four years contributing her sewing talents to the war effort. “It was so great to be a part of that time,” she remembers.
After the war, the Scangases went to Greece and adopted two girls from “a really nice foster home in Sparta.” Her other daughter, Joan, still lives in Massachusetts. Scangas now has three grown grandchildren and is looking forward to great-grandchildren.
The Scangas family began coming to Florida in the mid-1950s, initially settling in Miami. They loved going to Hialeah Park to watch the thoroughbreds run, and then go out to dinner.
Slowly she moved farther north, living in Boca Raton during the winter months.
Now she lives in Manalapan full time, coming north because Kathryn was here with her “wonderful son-in-law, Basil.”
At 100, she has no plans of slowing down and still loves spicy food.
“In fact,” Kathryn says, “we had to tone the food down for the party because she likes her food spicier than the rest of us.”
“She has been a wonderful mom, “ Kathryn added. “I am the luckiest person in the whole world to have a mom like this … I wouldn’t have it any other way.”