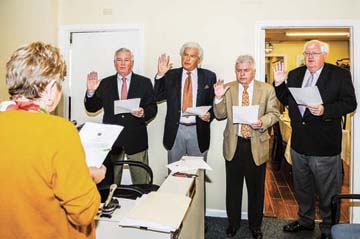 In his first 15 minutes in office, Manalapan’s new mayor set an agenda for the Town Commission to deal with during his first year in office.
“What I’d like to try to accomplish in the next year is to deal with the major issues for the town,” said Mayor David Cheifetz, shortly after he was sworn in with three new commissioners at the March 26 meeting.  All four were unopposed in the annual March commission election.
The four items on his list: the town-owned water system and an impending multimillion-dollar distribution system upgrade, a budget process that leads to hurried last-minute September decisions, beach erosion and seawall standards and, finally, increased participation by residents in town business.
Cheifetz also set out five rules “to run a more effective, less contentious meeting,” hoping to streamline the monthly sessions that often stretch to four hours. He later dubbed them “David’s Rules of Order.”
Chief among them is a five-minute limit for both speakers from the audience and commission alike on a single topic. Also on the list: treat others with “respect and courtesy,” don’t repeat earlier points, don’t read a statement already in the record and stick to the agenda item.
“We can either do it by the book” he said, referring to the massive Robert’s Rules of Order, “or by the five rules. Let’s try the five rules first.”
That lasted until discussion on the budget process veered into Commissioner Howard Roder’s complaint about an expenditure placed in the wrong line item in the budget and the use of overtime and car allowances.
“It’s sloppy work, and if I didn’t come up with this, who would?” Roder said.
Commissioner Louis DeStefano urged Roder to meet privately with town officials to express his concerns before bringing them to commission meetings.
At the suggestion of former Commissioner Robert Evans, commissioners decided to begin the annual budget process in June with an examination of projected expenses.
Estimated property tax revenues are not available until July 1. Budgets must be approved in September, by state law. In recent years, the commission did not begin budget workshops until August and often made final adjustments to the budget at public hearings in September.
In dealing with another item on Cheifetz’s to-do list, Commissioner Tom Thornton announced a four-member task force to deal with the water system.
“Do we sell it, do we keep it, do we give it away?” Thornton said of the system, which serves Manalapan and Hypoluxo. “It’s not that we’re running a bad system. It’s probably that we don’t have enough customers. You just have to look next door to Lake Worth to see what problems running a utility are for a town.”
Thornton expects to have a recommendation in three months. The volunteer committee comprises Thornton, former Mayor Kent Shortz, real estate developer Nick Nichols and banker Barry Haase.
In other business:
* Chauncey Johnstone, Peter Isaac and Thornton were sworn in as commissioners and Cheifetz as mayor, all serving two-year terms. Cheifetz nominated DeStefano as vice mayor and Thornton as mayor pro tem, and both were approved unanimously.
* Commissioners approved the purchase of a new all-terrain vehicle for police beach patrols, replacing a 2-year-old model that is requiring extensive repair. The cost will range from $9,500 to $15,000. Police Chief Carmen Mattox said several models will be tested on the beach before a decision is made.
* Commissioners rejected a proposal by Commissioner John Murphy to settle an eight-year legal battle with oceanfront resident Wendy Navellier. Murphy suggested the town accept $160,000 and the removal of a pool cabana building on the Navellier estate to end the dispute. Four commissioners said no and Johnstone had no opinion.  Since 2005, when the Navelliers began construction on a pool cabana without a permit or a variance, code enforcement fines of $450,000 have accrued. Navellier sued the town after the commission refused to grant a variance but lost. The Florida Supreme Court declined to review the case in February. The town has spent $340,000 in legal fees on the
case.