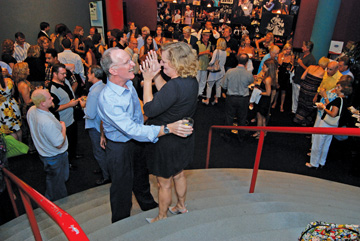 Ask Nancy Barnett, managing director of the award-winning Florida Stage, what she will miss about the
Manalapan playhouse now that the company is leaving and she mentions the baby crabs.
Baby crabs?
“Every year in October, when the baby crabs come out, they come under the door into
the offices, so we’d have to chase them out, sweep them out, carry them out in
shoe boxes,” says actress-turned-administrator Barnett. “We’re not going to
have that at the Kravis Center.”
After 19 years as the anchor tenant of Plaza del Mar, Florida Stage is moving to West
Palm Beach this summer to become a permanent resident of the performing arts
complex’s Rinker Playhouse.
Subscribers are split between those who see the financial and architectural advantages of
the move and those who worry about the personal inconvenience and loss of
theatrical intimacy. But for the staff, those crabs are a metaphor for the
behind-the-scenes struggles that were always a part of the theater’s life in
Manalapan.
“Sure, the space had its limitations,” concedes producing director Louis Tyrrell. “The
ceiling height limited us to plays with sets on one level and there was never
enough room backstage. But we’ve always felt that limitation feeds creativity.”
At Tyrrell and Barnett’s opening night speech prior to the world premiere of When the Sun Shone Brighter, the company’s final production at Plaza del Mar, there were more than a few misty-eyed recollections of the past two decades.
“Being here all those years, it just all washes over you for a moment,” says Tyrrell.
“You hear the ringing of all of those words and all of those stories in your
head.”
In 1991, Florida Stage had been in existence for four seasons at Palm Beach Stage
College — then Community College — in Lake Worth. That is when Palm Beacher
Mary Montgomery introduced Tyrrell to philanthropist Lois Pope, who had offices
in the plaza and thought an available space there might be worth considering.
“It was a vacant gourmet grocery store, all one level, with beautiful
black-and-white tile that’s still under there, I think,” says Barnett.
Scenic designer Victor Becker drew up plans for the conversion to a performance space
and a contractor was hired. “It happened very quickly, like three months, over
the course of the summer,” recalls Barnett. “Presto-chango, we had a theater.”
Looking back, Barnett admits there were doubts that their audience would follow them to
this new location. “Sure, because who knew where Manalapan was? I think we did
worry about it at the time, just because it was such an unknown place.”
Tyrrell remembers being more upbeat about the move. “I truly felt that it would give us
a higher profile, because we were going to be in our own space.” Still, in his
mind, this was always intended to be an interim residence for the company. “It
wasn’t long before we were looking and talking to people about a permanent home
in the center of the community,” he says.
Those talks reached fruition on Nov. 30, when Florida Stage and the Kravis Center
announced their partnership plan. “They’re so positive, so productive, so
helpful,” says Tyrrell of the Kravis staff. “We’re so lucky to have that kind
of attitudinal collaboration.”
With sufficient time to plan an orderly move, the transfer of 19 years’ worth of
theatrical and institutional history began following the final curtain on June
20. Included were more than 200 lighting instruments, the sound and infrared
hearing systems, some 75 to 100 boxes of files, books and binders, plus
computers, phones and office equipment, packed and carried in caravans of
company vehicles.
Summing up Florida Stage’s time in Manalapan, Tyrrell says, “It’s been such a great
adventure. Just think of it, exactly 120 productions here. It’s been a
fabulous way to spend a life.”


Hap Erstein is a freelance arts writer and contributor to Palm Beach ArtsPaper.com. He can be reached at hapster11@att.net.

Florida Stage’s first performance at the Rinker will be the Southeastern premiere of a new musical revue, Low Down Dirty Blues, written
by Randal Myler and Dan Wheetman. It’s a compilation of classic earlier
20th-century blues songs with an emphasis on the ribald double-entendre (My Stove’s in Good Condition, for
instance), made famous by masters of the form such as Howlin’ Wolf, Bessie
Smith, Ethel Waters, and others. The four-person show opens July 17 and runs
through Sept. 5: Wednesday through Sunday evenings at 7:30 p.m., and Wednesday,
Saturday and Sunday matinees at 1:30 p.m. Tickets range from $47-$50. Call
585-3433 or visit www.floridastage.org
.