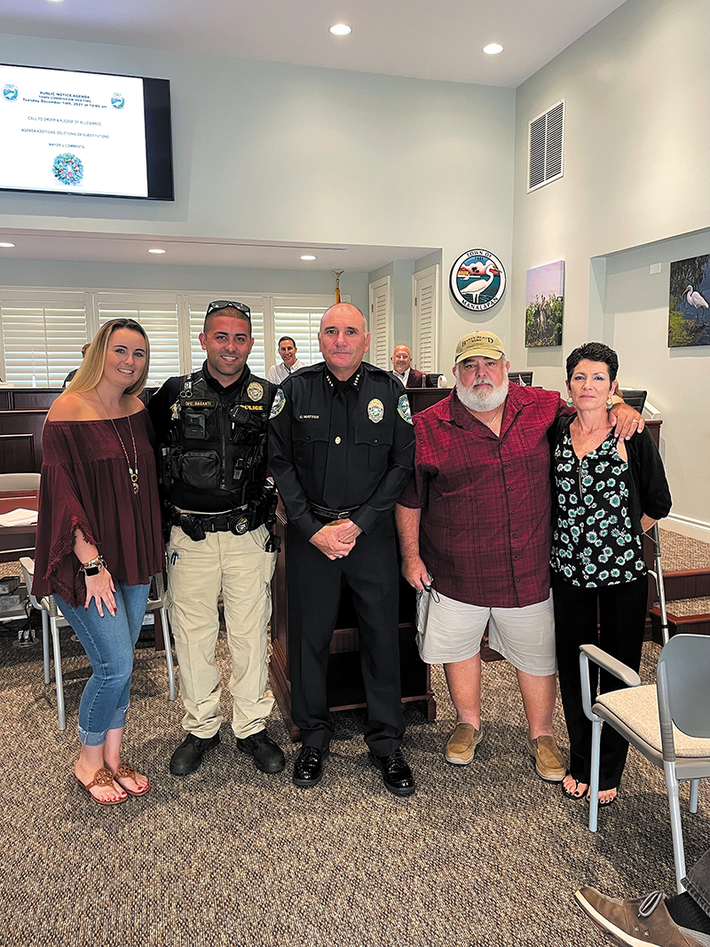 Manalapan police Officer Josh Basante had no idea what to expect when the 911 medical emergency call came to him late on an October morning.
“I could have been walking into anything from heat stroke to a dead body,” he said.
The caller was emotional and spoke in Spanish. Basante hurried to the home in the Little Pond neighborhood on the town’s Point. He was working traffic enforcement down the street and arrived in little more than a minute.
What he encountered was a bloody mess.
A window installer had been gravely wounded by a broken pane of glass.
“His wrist was almost chopped completely through,” Basante said. “There was a lot of blood.”
County paramedics in Manalapan were busy tending to a cardiac arrest victim at Lantana’s municipal beach, so it was up to the young officer to save the man until medical help could come from the mainland. Basante used a T-shirt to slow the bleeding, then retrieved a tourniquet from his patrol car.
Raised in a Cuban-American home, Basante calmed the man in Spanish and tightened the tourniquet around his arm — technique he learned during training with the Palm Beach County Sheriff’s Office. His girlfriend, Madison Ayres, is a trauma nurse. “She’s taught me a lot, too.”
The bleeding slowed, the worker survived and is recovering. If not for Basante’s quick action, the outcome could have been tragic, county fire-rescue Capt. Mike Politi said.
On Dec. 14, town commissioners honored Basante with a commendation. A smiling Police Chief Carmen Mattox flashed back to three years ago when he recruited Basante, fresh out of the police academy, and insisted he apply for the Manalapan department.
“I’m really proud because I handpicked this individual,” Mattox said. “He wasn’t going to apply, but I told him he had to.”
The chief had gotten a good look at Basante because he was his son Zachary’s wrestling coach at Cardinal Newman High School. Mattox gave the coach his first law enforcement job, and Basante responded by demonstrating “an outstanding level of courage and calm while going beyond what is considered his basic duties,” the chief said.
“We all are very fortunate to live here in the silence of comfort and safety,” Mayor Keith Waters told Mattox and Basante, “and we forget that on a day-to-day basis, you’re out there, boots-on-the-ground, taking care of it. And it means more than you’ll ever know.”
Mattox has ordered more tourniquets for his patrol cars. Basante intends to continue his training. “Any day you save a life is a good day,” he said.
In other business:
Because no candidates came forward to challenge incumbent commissioners, Manalapan will hold no election in March.
The town will have one vacant seat that it needs to fill, however. Vice Mayor Simone Bonutti is leaving because of term limits, after joining the commission in 2014, when she was appointed to fill the seat vacated by the retiring Louis DeStefano. Bonutti represents ocean residents and commissioners can appoint her replacement after the March 8 municipal elections.
Commissioners Richard Granara, who represents Point residents, and Chauncey Johnstone, who holds an at-large seat, were unopposed when qualifying ended in November.
Granara was appointed to the commission in 2019 and Johnstone was elected in 2020.