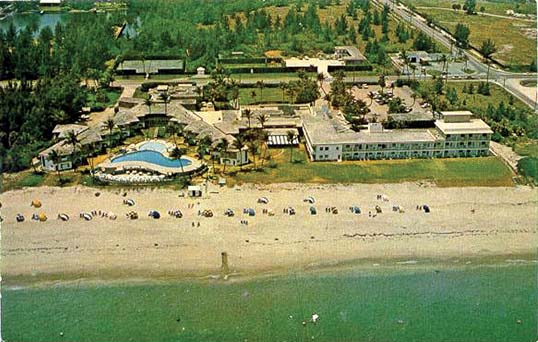 This aerial view from a postcard shows La Coquille in the 1960s or ’70s. To the right is the intersection of A1A and Ocean Avenue.

Our private clubs: An occasional series

Jet-setters flocked to Manalapan in 1952 when the La Coquille Club, a modernist masterpiece designed by Palm Beach architect Byron Simonson, made its debut. It was the place to see and be seen.
Members were captains of industry, congressmen, and people whose names made your ears perk up — Huttons, Fords, Vanderbilts, Whitneys and Rockefellers. 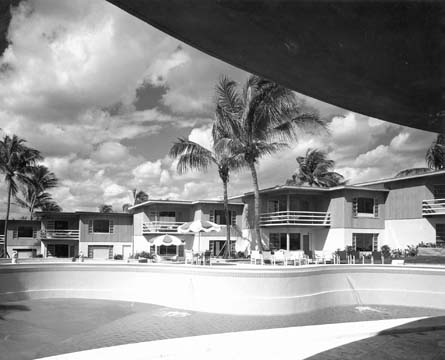 Visitors to La Coquille in its heyday might well have seen Esther Williams swimming laps in the kidney-shaped pool. Historical Society of Palm Beach County

They could discover Esther Williams backstroking in the kidney-shaped pool, Ginger Rogers tripping the light fantastic on the dance floor, or the Duke and Duchess of Windsor sipping gimlets in the Tortoise Bar. The Tortoise Bar was a tony watering hole that attracted the likes of the Duke and Duchess of Windsor. Historical Society of Palm Beach County

During one charity party, Henry Ford Jr. and Ethel Merman sang a lengthy,  hilarious duet, according to developer and former Manalapan Mayor William E. Benjamin II. In 1957, Benjamin started the town’s other social club — The Manalapan Club at Casa Alva. That club closed in 1976, but Benjamin continued to live in Casa Alva, which was sold recently.
Benjamin, a member of many social clubs over the years, wrote about all the Palm Beach elite attending the opening night gala at La Coquille in typewritten notes titled “The La Coquille Club is Born.”
“The conception for La Coquille (French for The Shell) is interesting, but first you need to meet the principal players,” Benjamin wrote. “There was Spelman Prentice, whose mother was a Rockefeller and it was sort of a friendly joke that Spelman regretted his name was Prentice and not Rockefeller. His beautiful wife was Lola Pierce, a girl I had known well in New York City and Southampton.”
The Prentices were immediately popular with the in-group, Benjamin wrote. They became close friends with Bob and Winny Bissett.
“Bob was an active and successful real estate broker and his wife was a popular young hostess,” Benjamin wrote.
Lola Prentice became ill with cancer and died a year or so after her arrival in Palm Beach, according to Benjamin. “Her husband (Spelman) felt much indebted to Bob and particularly Winny for their devoted care and interest in finding doctors, hospitals and treatment facilities for Lola. In gratitude, Spelman suggested to Bob that if he could arrange an attractive real estate investment that he would include Bob in it for a portion of the ultimate selling price.
“Bob said he was familiar with a nice piece of ocean to lake property in Manalapan that he thought would be a great spot for a modest motel, and thus La Coquille Club was conceived.” 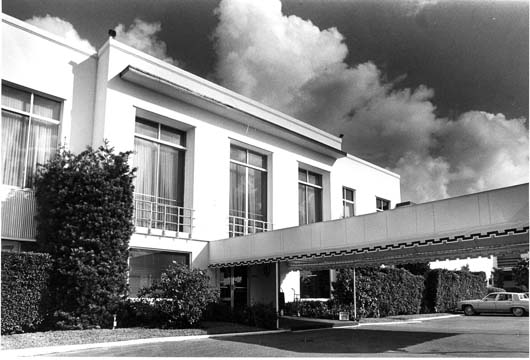 The concept soon changed from a modest beachfront motel to a world-class private resort club.
“You can argue as to whether this change was a result of Spelman’s sense of appropriate Rockefeller grandeur or Bob’s realization that the more money spent on the project the greater the value of his future payout,” Benjamin said. “At any rate, La Coquille did become very grand with beautiful buildings and facilities and the finest English china and Irish crystal and French linens. 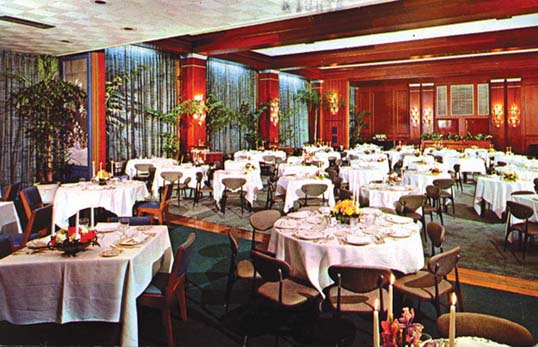 The high-ceilinged main dining room of La Coquille, seen here in a postcard image from around 1970, was paneled in mahogany.

“Some say so much money was poured into it that it could never make a profit, and indeed it most certainly never did. This led to lengthy disputes between the partners when Spelman decided to sell out and various lawsuits dragged on for years before the property was eventually sold (in 1972) to Bob Evans, who had been president of American Motors in its hey day.”
Benjamin added, “the La Coquille these people created was really a fabulous place with a tall ceilinged elegant dining room paneled with great mahogany panels and an Oceanside pool luncheon area.”
After enhancing the club and adding buildings on the north end of the property, Evans sold the club to Stephen and Patty Harrison in 1978, who ran into financial difficulties.
In 1983, the club held its final affair. Evans bought the club back for $3.2 million in a foreclosure sale and sold it to Norman Groh, a Virginia hotelier, in 1985. Although he obtained permission to build a 230-room hotel on the property, he was unable to secure financing. The original club was demolished in 1986 to make way for the Ritz-Carlton Palm Beach. Historical Society of Palm Beach County

The original club was razed in 1986 to make way for the Ritz-Carlton Palm Beach, with the caveat that there would always be a La Coquille Club presence at the Ritz.
Evans had negotiated with shopping center mogul Mel Simon, who built the Ritz-Carlton. The La Coquille Club, which currently occupies a lovely (and recently remodeled) 2,400-square-foot dining room and 600-square-foot terrace on the ground floor, opened in the Ritz in 1991. Bob Hutcheon, club manager for the past 16 years, said that the club is open to all property owners in Manalapan. The hotel, he said, was sold to the Lewis family of London six years ago and continues to be managed by the Ritz-Carlton.
“It’s a win-win,” Hutcheon said of the club’s relationship with the hotel. “It’s a fantastic amenity.”
Currently, there are 345 family memberships. Since the Lewis family bought the property, the policy changed so that membership is limited to Manalapan residents, however several long-time members who live nearby were grandfathered in, Hutcheon said.
All members have access to all the hotel’s amenities, from the beach, pool and tennis courts, to the fitness center, spa and restaurants. There are no dues, although members are charged for spa services and meals.
Emmy Haney has been a member of the La Coquille Club since the 1970s, when she and her husband bought a home next door at La Coquille Villas. They still own four villas, but have moved nearby to the Vanderbilt estate (Eastover) — where Simon also once lived.
“We’d come down with our five children and we’d go for big band music on Saturday nights,” she said. “We could get meals sent over, too.”
“It’s a great old club,” Haney, a long-time member of the board of directors, said. “I don’t think people realize what a great amenity we have. I go over often. We (the club) only have a room now, but we have access to the entire hotel and beach — which is especially nice for people who live on the Point.”
Living in Manalapan has many benefits, as Realtors will tell you. Complimentary membership to La Coquille Club is certainly one of them.