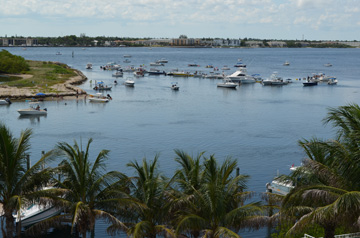 Recreational boaters and snorkelers gather along the north side of Bird Island, where Manalapan residents say their presence can be a nuisance. Photos by Jerry Lower

The summer sun is hot, and so are neighbors of the Boynton Inlet.
A weekend horde of boaters has invaded their backyards, transforming the once-serene cove off Bird Island into a jumble of booze, bikinis and blaring stereos.
“If I want to take a phone call and sit outside on my back deck, I can’t talk. It’s that loud,’’ said Manalapan Town Commissioner Louis DeStefano, who lives three doors north of the inlet.
Ken Brown, who lives next to the inlet, gets the brunt of the unwelcome intrusion. 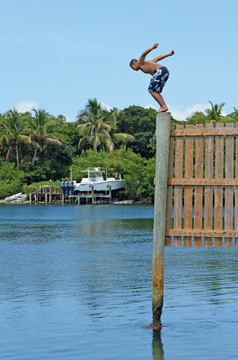 “They swim, snorkel, come under the dock,’’ Brown told town commissioners at their July 26 meeting. “They actually climb the fence that I put up and jump off the pilings and do back flips and dives.’’
Palm Beach County’s recent improvements to Ocean Beach Park’s jetties and the end of construction of a seawall on Bird Island have made the inlet “the place to go to party,’’ said Andy Klinginsmith, who represents the Ziff family property at the north end of the cove as well as the Bird Island environmental sanctuary.
“We had three or four large boats in there Sunday that just partied up,’’ Klinginsmith said. “The noise was incredible.’’
Brown said he saw a floating bar.
“It goes on sometimes until 6 o’clock in the morning across the waterway,’’ he said. “I haven’t made any real complaints or anything yet. I guess I’ve been a more sound sleeper lately.’’
Crowds are swelling on the ocean side, too.
“The beach at the front of my house right now has become quite an attractive area for a great deal of the high school, college girls, and they’re attracting the college boys,’’ Brown said. “I don’t even want to go to the beach because it’s just heavily populated.’’

Adding to concerns is graffiti spray-painted on the walls of Brown’s property. Police Chief Clay Walker said it was verified to be gang “tagging.’’
“We’re starting to see an element of people come in there to make this their turf. And some of the graffiti that’s there is actually an alternate gang,’’ Walker said.
Even before talk of gangs in Manalapan, Mayor Pro Tem Donald Brennan said the problem was the community’s, not just Brown’s, and should be resolved sooner rather than later. 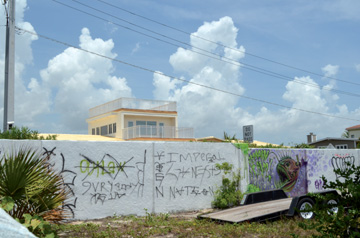 “Left un-dealt-with and kind of fiddled around the edges, this could lead to a migration of the issue that involves more work,’’ Brennan said.
Beach-goers already have come at least as far north as Dennis Hammond’s home — a recent $10 million purchase — about a half-mile from the park, and left beer bottles and cigarette butts around his teak beach chairs.
Hammond, who just moved to Manalapan, took friends across State Road A1A for a beach stroll and found the inlet area “just filled with people.’’
“The first thing we saw was three kind of rough-looking guys running their pit bulls in and out of the water,’’ Hammond said. “So my first note-to-self was, I can’t bring my dogs over here like I expected or they’ll be eaten alive. I’m just hoping my wife’s not.’’
Brown said he has not seen the beach and inlet this crowded in the 11 years he has lived in Manalapan. Klinginsmith said visitors on the Bird Island side used to be primarily families and snorkelers.
Besides noise and crowds, the issue is public access vs. private property rights.
Walker said on both the ocean and the Intracoastal sides the public is entitled to be below the mean high water mark, or the “wet sand’’ portion of the beach, but not the “dry sand’’ side.
“I don’t have a private beach anymore,’’ Brown said.

Budget cuts sank park patrol
A mutual-aid agreement with the Sheriff’s Office allows Walker’s officers to respond to trouble on the north side of the inlet, but not having a boat is a problem, he said.
“We can sit there and shake a fist … but they shake something else back,’’ Walker said.
The Sheriff’s Office used to have a park patrol and once kept up to four boats at Ocean Inlet, but budget cuts dissolved the park unit and only one boat is still stationed there, Walker said.
Town commissioners encouraged Brown to post no-trespassing notices on his fence, dock and walls. Brown said he had hoped Manalapan would install official-looking signs, “maybe make it not so convenient to walk up and down the beach,’’ but Town Attorney Trela White said she would have to investigate what could be done. Town Manager Linda Stumpf said she would contact the county Parks Department to have it enforce closing inlet parking at sunset. 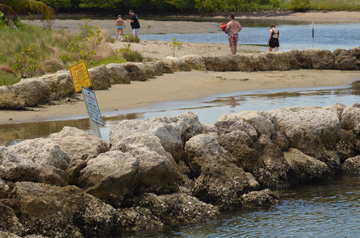 Cooperative effort needed
Ocean Ridge Mayor Ken Kaleel, in the audience to lobby for a client on beach house dimensions, said his town had also noticed the increase in beach traffic and might help control it.
“Unless we have a beach patrol, unless we have a marine patrol, it’s not going to go away,’’ Kaleel said.
The solution could be a combination of a citizen patrol and police patrol, he said, and funded by both towns, Homeland Security grants, county grants and maybe a contribution from Gulf Stream.
“Since the county has kind of pulled back, we need to fill that gap,’’ Kaleel said.
Stumpf thanked him for the offer.
“Dealing with it jointly with another community will help us with the cost of it,’’ she said. “We looked into a marine patrol also. It was cost-prohibitive for us to do it.’’
Meanwhile the forecast for the weekend was more crowds, more trash and more noise.
“They’re actually coming up on top of the dock. It’s even gotten to the point where they’re aggressive enough to clean their fish on my fish platform,’’ Brown said.
Added Hammond: “We can hear these guys from where I am, and I’m way the heck up the beach. We always think, ‘Gosh, I feel sorry for that poor guy down there at the end.’ Now I know who he is.’’