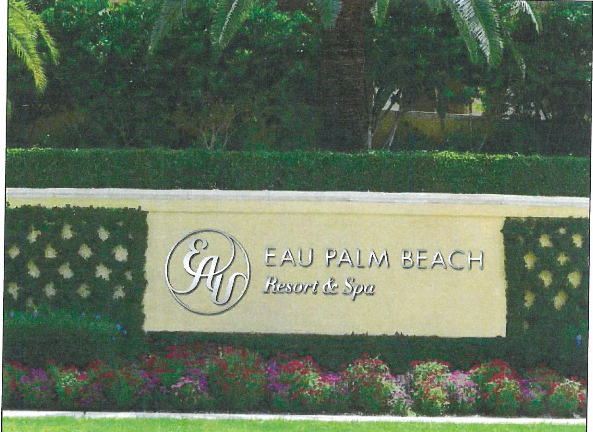 An artist rendering of the new logo for Eau Palm Beach.

After grumbling for months over the loss of the Ritz-Carlton name at Manalapan’s landmark hotel and spa, town commissioners took a major step toward acceptance when they gave the resort’s owners permission to install permanent signs on Nov. 19.
The newly minted Eau Palm Beach Resort & Spa now will have its name chiseled in stylish stone and shiny metal.
Not that a sign will end the complaining, however.
“Some people say the service at the hotel has deteriorated,” said Mayor  David Cheifetz. “Some think it has improved. But clearly, there is a consensus that nobody likes the name.”
But Cheifetz said the town has no control over what a private enterprise chooses to call its business. “We do not own the naming rights,” he told the packed commission chamber.
On a 4-1 vote with Commissioner John Murphy dissenting, the commission gave the resort owners the go-ahead to etch their name in stone. The amendment also clarified the definition of what the luxury resort should be and removed references to the Ritz-Carlton from the town’s documents, describing it instead as “the Hotel and Spa located at 100 South Ocean Blvd.”

Eau, well
Former Mayor Kelly Gottlieb told commissioners the town has to move on and get over the relationship that has ended.
“Many of us have been married and then divorced,” Gottlieb said. “We get married and we say we’re going to be married forever. I think we should look at this as a divorce. Very simple, it’s two people who did not get along.”
The Ritz became The Eau officially on July 1, when owners RC/PB Inc. announced their management agreement with Ritz-Carlton was canceled after a two-year legal dispute over management fees. Preferred Hotels, which runs 15 other five-star, five-diamond hotels worldwide, was hired to set the resort’s course as an independent operation.
Ray Royce, attorney for the owners, said they had spent “millions and millions” in improvements over the last decade and were committed to keeping the resort’s exclusive ratings. Royce said many in the chamber came to the meeting with the misguided assumption they could prevent the name change.
“I don’t tell them what to name their children or their businesses,” he said, noting that no one tries to tell businesses such as “Guido the Tailor” or “The Ice Cream Club” across from the resort what they should be called. “Nobody has the right to name the hotel but the hotel themselves.”
Commissioner Peter Isaac said that, apart from the name, the commission had a duty to stand up for the town’s interests. He said the owners should commit to aggressive marketing because they no longer have the benefit of name recognition.
“We want the hotel to succeed,” Isaac said, “and we want to protect the town if it doesn’t.”
Michael King, the resort’s general manager, said the owners had just begun a marketing campaign that included advertising in The New York Times.
King admitted there was a dropoff in business last summer, but corporate bookings were coming in stronger than expected. He said it could be that putting Eau on company expense forms is more acceptable to accounting departments than having to justify stays at the Ritz.
“We’re better today than where we thought we’d be,” King said. “It’s about the destination. It’s not about the name.”
Commissioner Chancey Johnstone asked how long it would take for the Eau to build name recognition.
“Eighteen to 24 months,” King answered, citing his 30 years’ experience in the hotel business and his knowledge of similar transitions to independent operation.
Still, Murphy was unconvinced. He said, on his last visit to The Eau, his wife had trouble finding towels by the pool and the staff didn’t greet him in “the over the top” way they used to. “Service has, without a doubt, gone down,” he said.
In other business: The commission gave preliminary 5-0 approval to an ordinance that will clarify responsibilities when one neighbor’s landscaping encroaches on a neighbor’s property. A second vote is scheduled for Dec. 17.
Commissioners also decided to hold off considering a possible deal to sell water to Boynton Beach until the city provides the commission with more information.