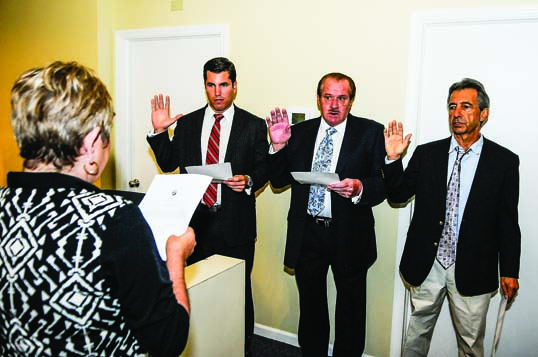 Manalapan town commissioners got a face-to-face report from the engineer who evaluated their crumbling Audubon Causeway bridge.
What Jeff Bergmann told them was that there are no quick or easy fixes for the 20-foot span, but something will have to be done relatively soon.
“As you drive over it, it looks like a perfectly healthy bridge,” said Bergmann, a consultant with Bridge Design Associates. “But when you go underneath — we were concerned.”
Bergmann told the commission at its March 25 meeting that the bridge’s pilings are decaying, with steel reinforcements showing the signs of decades of corrosion. He said, however, that the chances are slim that the structure will collapse.
“Prior to any collapse, you’re going to see some large movements of the bridge that will visually warn somebody,” Bergmann said. “So it’s not going to fail in an instantaneous mode, but will continue to degrade over time.”
The consultants recommend repairing or replacing the bridge within a two- to three-year period. The price tag for repair is about $528,000, with an estimate of at least 10 years of service; the cost to replace it is about $760,000, for 50-plus years of use. The estimated construction time is between a year and 18 months, with one-way traffic maintained during the project.
“The sense of the commission is we have a decision that’s going to impact the town for quite a long time to come,” Mayor David Cheifetz said. “We just simply need more information.”
Bergmann told commissioners it wasn’t feasible to use a prefabricated truss bridge — a World War II-type Bailey bridge — to reroute traffic temporarily because there isn’t enough land to install it around the span. He said using a culvert design could work but also would require federal permitting that would consider the potential environmental impact to sea grass and fish. That process could take two years with no guarantees of approval.
Bergmann said it might be possible to reduce the number of pilings with a “clear span” design, cutting some cost and construction time. He told commissioners he would give them estimates on that alternative and also on wrapping the existing pilings with jackets to extend their lives.
The commission unanimously approved a provision to restrict truck traffic on the bridge, under which companies with heavy utility vehicles will have to assume liability for crossing the span.

Town Manager Linda Stumpf said federal and state agencies won’t allow the town to stop the boat traffic underneath.
Bergmann said he is comfortable with the load restrictions the town has placed on the bridge.
“I’ve been conservative because one of my jobs is to protect the public,” he said. “So we made our best estimate.”
In other business:

• Commissioner Peter Isaac’s proposal to limit public comments to three minutes won unanimous approval. The change brings Manalapan in line with neighboring communities and includes a “mayoral override” provision that allows the mayor to grant speakers more time when warranted.
Isaac noted that Abraham Lincoln only needed two minutes for the Gettysburg address and the current five-minute limit is too long and fosters pontification. “You don’t build a church for Easter Sunday,” he said.
• Stumpf said a 14-page consultant’s report has found that the town will need to spend about $21,500 to make parking and access to the 33-year-old Town Hall building compliant with federal Americans with Disabilities Act requirements.
The report comes in response to a complaint by resident Kersen De Jong. The commission decided to take up the proposed changes and how to pay for them at its April meeting.
• Two new members were sworn in to the commission after going unopposed in the March 11 election: Clark Appleby, who has served on the town’s zoning board, claimed the at-large seat vacated by John Murphy; and Ronald Barsanti, a member of the architectural board who took the point seat vacated by Howard Roder. Vice Mayor Louis De Stefano also was sworn in to another term representing the ocean district.
Appleby, an investment manager, is the grandson of former Manalapan Commissioner John Manfuso. Barsanti got his first assignment in his first meeting: Mayor Cheifetz asked him to sit in on the town’s screening of engineering consultants. Ú