Rob Patten recalls the first time he stepped foot on Beer Can Island. “I thought if I was a homeless person, I could make a fortune selling aluminum cans. It was just a huge party island. Litter was everywhere. Biologically speaking, it was pretty much a wasteland.”
That was three decades ago. Today, the islet is known as Bird Island — a roughly 7-acre private wildlife sanctuary adjacent to the Boynton Inlet — thanks to the years-long efforts of Patten and others, and the billionaire who owned the land and paid for its transformation.
The island’s future is unclear now, however, since the Ziff family sold its 15.65-acre ocean-to-Intracoastal estate in Manalapan for $94.17 million in March. Bird Island is west of the estate and was sold for $200,000 as part of the same transaction.
Patten, an expert in coastal habitat and dune restoration, says altering the island “was a challenge. As a professional, you don’t often get a chance to do something like this at this scale that is totally funded. When we started looking at it, we thought there was a unique opportunity to create something, not only beautiful, but environmentally beneficial.”
The recent acquisition was made in the name of a trust. The buyer is widely believed to be James Clark, a founder of Netscape and other major tech companies.
The buyer’s trustee for the sale, attorney Ronald Kochman, says he doesn’t know the owner’s plans for the island or what condition it’s in, and couldn’t comment even if he did.
Manalapan town officials say they haven’t been contacted by the buyer and don’t know what the future holds for Bird Island. 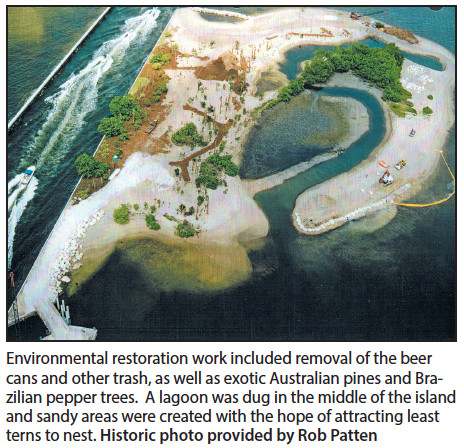 How job was done
Like Peanut Island near Palm Beach, Bird Island is a man-made spoil island. It was created when dredging was completed in 1927 to establish the South Lake Worth Inlet — Boynton Inlet — to connect the south end of Lake Worth Lagoon with the Atlantic Ocean. It resulted in sand accumulating to form the island.
When the late publishing mogul William Ziff Jr. bought the Manalapan mansion in the 1980s, the island came with it. He retained Patten to restore a dune on the beach east of the estate, called Gemini, and Richard Moyroud to landscape the grounds.
Patten, a retired Sarasota County environmental consultant and former manager of that county’s environmental sciences division, worked on various projects for the Ziff family for about 26 years.
Moyroud, who owns a native plant nursery west of Lake Worth Beach, is a consultant and an authority on regional Caribbean plants.
After Moyroud had worked for about eight years in the 1980s and 1990s landscaping the Gemini grounds, Ziff’s interest turned to the island.
Patten, Moyroud and the Audubon Society collaborated on devising a plan to convert the island to a natural state. “We wanted to create a habitat that was beneficial to migratory birds, resident birds and native wildlife,” Moyroud says.
The island was choked with tall, nonnative Brazilian pepper trees, and especially, very tall Australian pines, which sometimes displace native flora that provides wildlife habitat.
“A complete biological desert,” Moyroud says.
Moyroud’s job was to oversee placement of several types of plant communities into the soil, all blending seamlessly into the next, and to obtain the equipment for doing so.
Patten oversaw securing permits for the work, and collaborated with Moyroud and Audubon’s wildlife biologist Richard Paul (who has since died) to enact the restoration plan.
Moyroud’s team ripped Australian pines out by their roots. The trees were devoured by a huge grinder that Patten had barged over to the island, even erecting a temporary bridge at the site. The rapacious invaders were reduced to mulch and replaced by other vegetation.
The core of the island was then planted so as to become a maritime hammock, with West Indian trees native to the region such as black ironwood, strangler figs and cabbage palms, to name a few.
Mangroves and other flora were planted on the north side of the island, along with salt marsh grasses. Saw palmetto palms and spider lilies were among the vegetation planted on the south side facing the inlet.
Boulders and riprap were added to shallow waters to slow erosion and provide marine life with habitat. A crane was used to install the huge rocks, with some workers diving below the water to position them, Moyroud says. “It was a tremendous accomplishment,” he adds.
Moyroud says the birds “that really caught our attention were least terns. We wanted to create a safe nesting area. That was part of the design.”
Least terns prefer nesting in colonies on sandy beaches and have lost extensive habitat because of development and human activities. The state lists them as endangered.
As part of the Bird Island makeover, Richard Paul placed least tern decoys on sandy portions of the island in an effort to entice them to nest there, says his widow, Ann Paul, a longtime Audubon advocate in Tampa.
All of this was approved and financed by Ziff.
“Bill Ziff was an incredible individual — by far the most intelligent man I know of,” Patten says. “He had a strong environmental ethos. He wasn’t afraid to be bold. When he looked at a project, it was not how much did this cost … how long will it take. His criteria were to do this right.”
Ziff established a private foundation, Bird Island Trust Inc., to manage the island. His widow, Tamsen Ann Ziff, is listed as president. The foundation spent $5,202 in 2018, according to federal tax records.
The Ziff family declined to comment for this story. The foundation’s vice president and treasurer, New York City attorney Spencer Lehv, did not return a phone message. Island still in good shape
Over time, the island’s new vegetation flourished, but the least terns did not. “It was almost impossible to keep boaters and their dogs off of that sandy spit. The terns didn’t have a chance,” Moyroud says.
True, Patten says, but the lagoon on the north side of the island attracted shorebirds, a fish nursery and even horseshoe crabs.
Like Moyroud, Patten devoted several years to revamping the island. He was asked to return to Manalapan and Bird Island around 2008. William Ziff had died, but his right-hand man wanted Patten to do additional work on the island, such as mitigating erosion.
“I didn’t find it to be trashy. I was really surprised,” Patten says of the island. “The family wanted to continue to keep it at a high level.”
Boaters reacted angrily in the 1990s when the island became a wildlife sanctuary and was declared off limits to them. They still can intrude despite the no trespassing signs.
Trespassing “takes more of an effort” now because of some of the changes, Patten says. “Most of the people did not want to jump over the rocks.”
John Ferber estimates that the dock at his Manalapan home is no more than 500 feet from Bird Island. He’s seen perhaps 200 boats at times in the cove on the north side of the island. “It’s not a big collective party,” Ferber says. “It’s more like tailgating on the water.”
Some folks set up barbecues, and it’s not uncommon to see dogs running around, Ferber says. But this occurs at low tide on a sandbar, not on the island itself, he adds.
“The island itself is relatively unperturbed. There definitely are birds on the island. It’s a very peaceful place,” Ferber says.
Paul Davis, sanctuary coordinator at the Audubon Everglades chapter, says it’s hard to know definitively without taking a census which birds and in what numbers make stops at Bird Island.
There’s no question, however, that migratory birds find it to be an inviting rest stop and a place to refuel on their journeys north and south. The shallow waters around the island also appeal to wading birds, small fishes and crustaceans. And the sea grasses and mangroves there improve water quality.
Davis paddled near the island in the last year or two. “I didn’t notice any exotic vegetation. It looked like it was in good shape. The canopy had matured. It’s kind of an oasis.”
Years later, Moyroud and Patten remain proud of what wasn’t a restoration of the island, but rather a complete and complex re-creation of how it would look in its natural state.
Patten hopes that the new owner “will maintain it as the refuge from development that it is now.”