A new exhibition at the Boca Raton Historical Society explores the role of the beach in the history of Boca Raton.
The “Life’s A Beach!” exhibit, which will be up through the end of August, includes everything from archaeological artifacts found on Boca Raton beaches to a display of vintage swimsuits and photographs. The exhibit highlights the beach’s role in the city’s economic, political and social history throughout the 20th century.
An anthropologist by training, curator Susan Gillis chose photographs and other historical objects that reflect the significance of the beach and the social mores of the people living near it. 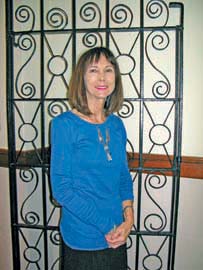 “I’m very interested in how ordinary people live everyday life,” Gillis explains.
There are photographs of beachgoers in 1915, a glimpse of the segregated beaches in 1940s, and a glamorous poolside photo of ladies at the Cabana Club in the early 1950s.
In the exhibition’s 30 photo murals and interpretive panels, Gillis says she looked to explore “the changes of the beach through time, the impact on the community and what a precious resource it is, that we’ve long taken for granted — especially public access to the beach.” 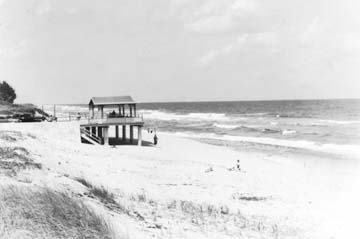 Boca Raton’s primary ‘beach’ has always been at the end of Palmetto Park Road. Since the 1920s, a pavilion has welcomed locals and visitors to town. This image shows what was known as the ‘lacy pavilion’ around 1948. Photos courtesy of the Boca Raton Historical Society

Maybe most moving is an early shot of Boca Raton when the beach was simply a windswept shore, before the pavilion, before Northern visitors, the beach and the natural beauty of the shoreline beckons.
The exhibition explores the battle between those who wanted more and less development along Boca Raton’s coastline in the 20th century. 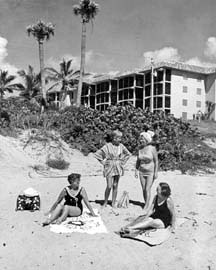 The 1960s marked a new era for Boca Raton as high-rises sprang up along the city’s coastline. One of the best marketed was San Remo, south of Spanish River Park on the west side of A1A. Construction began on the first villa in May 1966. Above, Agnes Albers, Liz Matthews, Bert Gavigan and Mary Walker pose for a promotional photograph near San Remo in 1968.

There is a photo of the first mansion on the beach and a photo signaling the arrival of condominiums on Boca Raton beaches in the 1960s, when, as Gillis explains, “You’ve got condos springing up like mushrooms all over the beaches.” 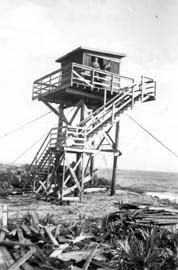 Volunteers of the AWS, Aircraft Warning Service, manned the Boca Raton aircraft spotting tower located in the vicinity of Red Reef Park during World War II. Everyone memorized the silhouettes of Allied and Axis aircraft and manned the spotting tower in shifts. There was a phone line linked directly to Town Hall in case of an unwanted sighting. The tower was demolished in 1946.

Beyond photos there are a number of intriguing historical objects on display, including pre-Columbian artifacts from Boca Raton’s earliest settlers, items from inside a World War II spotting tower where local residents watched for German planes and submarines, and 13 vintage swimsuits reflecting beach fashions from the 1910s through the 1960s from the swimsuit collection of local historian Patsy West. This is the style of bathing costume seen on the beaches of Boca Raton circa 1900-1915. At left is a woman’s wool suit, which features a dress and bloomers and would be worn with stockings. The man’s suit at right also is wool and has a ‘modesty’ panel. Suits courtesy of Patsy West 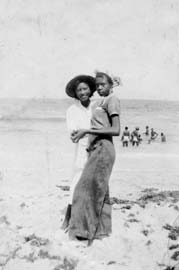 Boca Raton’s African-American pioneers recall that during the days of segregation, the ‘black beach’ was north of the Palmetto Park Pavilion. In this photograph, Boca Raton pioneer Irene Demery (Carswell), in very trendy big-legged trousers, poses with her friend at the ‘black beach’ in the 1940s. This view shows two of the doors salvaged from the demolition of the Cabana Club in 1981. The vent openings came in one of two shapes, seahorses or, naturally, ratones.