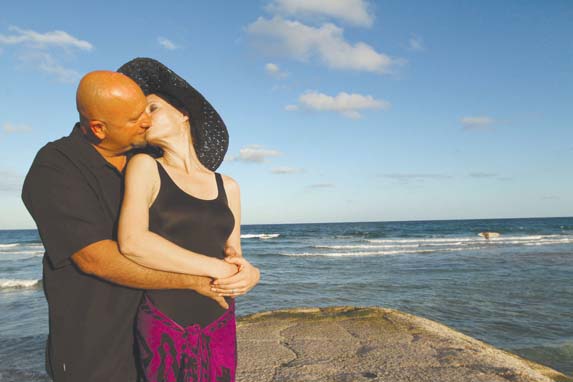 Living proof that opposites attract — Lia and Tyrone found one another in 2004.
“I like a beer on the beach and she likes classical piano,” Tyrone explains. She’s the introvert; he most definitely is not.
When they met, Lia was an Iowa farm girl with just a few years of Florida living.
While walking her dog back from the beach, she spotted Tyrone there on Briny Breezes Boulevard, cutting some rope to use as a belt for that night’s toga party.
“I thought she was attractive,” recalls Tyrone, 41, who moved to Florida 18 years ago. “I talked to her and she blew me off. But I tried again. The third time I said something, she flinched, and I was like, ‘Yeah, got her.’ ”
Lia says she agreed to don a toga that night “because my field is higher education and I thought it was a professional requirement to go to at least one toga party.”
The party’s setting was lush, she recalls, and she decided Tyrone was the “best guy there.”
He asked her to come back to the beach the next day to learn about kite surfing, which she did.
From there, it was a short road to moonlit sails on Tyrone’s catamaran and romantic bonfires on the beach.
“He’s the only person who never holds me back,” says Lia, 37. “I know I can grow and learn and reach my potential with him as my partner.”
There was no formal proposal; but Tyrone and Lia wanted to focus on a family and together they just agreed that 11/11/11 was the perfect wedding day. The plan was to get hitched in Hawaii, but son Tytan made an early arrival, so the couple got married close to the spot where they met.
These days, they confess to being enraptured with their son, and say parenting him connects them deeply.
Though they sleep at their home in Boynton Beach, each day after work finds them in Briny Breezes, at the trailer where Tyrone’s mom lives, spending quality time with their 1-year-old.
Right from the start, the couple wanted things to be special for Tytan.
“We had a home birth,” Lia says. “Tyrone was so tuned in and supportive through the whole process. It was really a bonding experience for us — in a big way.”
“She didn’t even take an aspirin,” Tyrone adds with pride.
When asked if there’s a secret to their success, Lia says it pays to keep a desire list and help one another achieve it.
“Focus on daily pleasures instead of conflict.”