Neighbors, family members, longtime clients and anyone else who knew veterinarian Ken Simmons rarely were at a loss for words to describe him. He stood 6-foot-8, but his attitude and actions stood out even more. 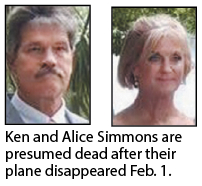 They talked about his unyielding compassion for pets, his reputation for innovation and most of all, his determination to get the best out of life every day. These traits were shared by Alice, his wife of nearly 33 years.
On the afternoon of Feb. 1, Ken, 62, and Alice Simmons, 59, of Hypoluxo Island, loaded up their 1979 Piper Lance II single-engine aircraft with supplies and their golden retrievers, Lily and Bailey, bound for their favorite and frequent destination, Great Guana Cay in the Bahamas, where they had a waterfront getaway home. But 15 minutes after leaving the Palm Beach County Park Airport in Lantana with Ken as the pilot, the plane plunged into the Atlantic Ocean.
Despite intense search efforts by the U.S. Coast Guard, Federal Aviation Administration and U.S. Air Traffic Control, the plane had yet to be recovered almost a month later.
While no one can say for certain what caused the aircraft to go down, there’s a good chance weather was a factor.
According to a preliminary report from the National Transportation Safety Board, the plane was cleared to higher altitudes to avoid areas of heavy rain but veered from its assigned headings.
After being questioned about that, Simmons told the air traffic control tower that his autopilot “had kicked off” and that “the winds are really weird up here.”
He apparently tried to maneuver around the storm cells and later told the controller, “I don’t know what’s going on up here. I’m working on instruments . . . acting really goofy here.”
The controller advised him to try to maintain an altitude of 6,000 feet and said it “looks like you are getting pushed up in the air drafts.”
Simmons did not reply and there was no further communication. Radar showed the plane rapidly descending and then disappearing off the screen in heavy storms about 15 minutes after it took off.
Downdrafts — or microbursts — are one of the biggest threats associated with thunderstorms, said Richard McSpadden, executive director of the Air Safety Institute of the AOPA, a pilots and aircraft owners association.
McSpadden speculated that Simmons might have ultimately encountered a downdraft.
“Downdrafts can be so severe that they impair your ability to have enough control to overcome them. They push your airplane down like an elevator,” McSpadden said.
The NTSB will investigate further, but it could take months or even years before the results are finalized.

Making the world better
What is certain is that Palm Beach County and beyond lost a couple who shared a lifelong mission to make this a better planet for all, including pets.
“What I remember most is the simple kindness, his gentle words, his caring about my K9 partner Sabre and the thousands of other dogs and cats who came through his doors,” said Bob Burnell, a retired police officer who operates Sit Means Sit dog training in Boynton Beach.
Burnell and his wife, Eileen, first met Dr. Simmons 17 years ago late at night at the Simmons Animal Hospital in Greenacres when their two Akitas got into an altercation that required sutures.
“He stitched up the little one and sent us home with some antibiotics,” recalled Bob Burnell. “He called the next day to see how she was. That was the kind of veterinarian he was.”
And, on the day Sabre suddenly collapsed on a walk and died, Burnell was devastated, but police policy mandated that a necropsy be performed.
“Dr. Ken knew I was upset about having my partner cut apart,” Burnell said. “He spoke gently, kindly, on how he was going to perform this with limited surgery. I could not speak to anyone because I was so devastated. Dr. Ken spent hours on the phone explaining to Eileen, my wife, about what happened, about the tumor on K9 Sabre’s heart, how it took that moment to burst and how Sabre went quickly.” 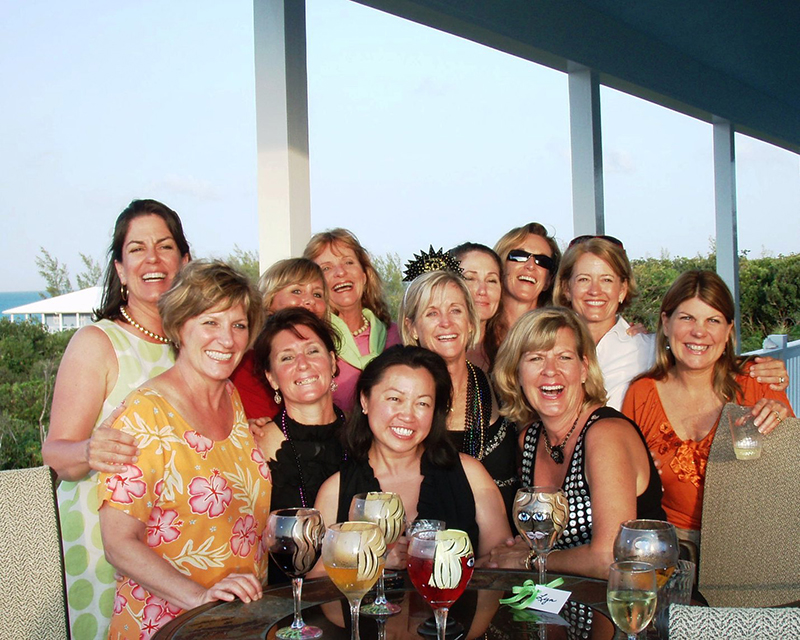 Alice Simmons, wearing a black crown, is surrounded by friends, including Lyn Tate (first row, fourth from left), at her 50th birthday party at the Simmons home on Great Guana Cay. Ken Simmons had flown her friends there to surprise her. Photo provided by Lyn Tate

J.J. McDonough, a friend and neighbor, flew often with Dr. Simmons to the Bahamas and said his friend was a good pilot. They enjoyed fishing and diving on these trips.
“The guy just attacked life with such tenacity,” McDonough said. “I never really met anyone who just tackled everything — his personal life, his professional life, everything that way. Every time he would go to the Bahamas, he would bring certain vaccinations and things to assist the dog community in Marsh Harbour, which he didn’t have to do and he did it on his own dime. He gave his time and energy in a lot of different ways.” 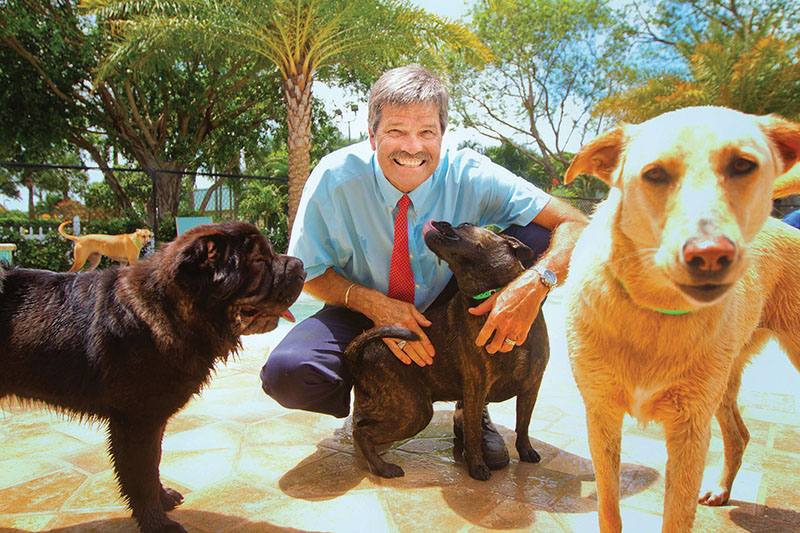 Ken Simmons visits the dog day care at his animal hospital in Greenacres in 2013. He sold the hospital when he retired a few years ago. Coastal Star file photo

McDonough said beyond Simmons’ work as a veterinarian, he helped implement a business curriculum in the veterinary school at the University of Florida, after he found that interns who worked for him lacked business knowledge. When he sold his business, Simmons helped found Healthy Aquatics Marine Institute, a not-for-profit on a mission for coral conservation through education, research and restoration. He remained active with the institute in retirement.

Not the sort to give up
And he got the most out of everything he took on.
“I remember we were in Abaco and he went free diving on his own one morning out in the reef,” McDonough said. “He speared a couple fish and, on the way back, he had a small reef shark that was after his fish. The first rule of spear fishing in the Bahamas is if you shoot a fish, you usually leave the location you’re at. You don’t stay, because typically there’s a larger fish and typically that fish is a shark that is close by, because the Bahamas are very sharky.
“This small reef shark was after the couple fish that he got and he was trying to fight off this shark not once, but essentially for his whole swim back to shore. The reef was probably 200-300 yards out when he swam back. He probably had to attempt to mitigate this issue with this shark for probably 10 minutes. Most people would just get rid of the fish, give the shark your fish. But he wasn’t going to do that. He was not that type of guy. He wasn’t going to give up the fish.”
Rob Martin, a veterinarian who operates the Colonial Animal Hospital in Boynton Beach, said, “He was a terrific guy who was very innovative. The use of technology in veterinary medicine was very important to him. I also understand his draw to the Bahamas as we take our boat there.”
Rich Anderson, executive director and CEO of the Peggy Adams Rescue League in West Palm Beach, credits Ken and Alice Simmons for aiding not only family pets, but also homeless ones at shelters.
“The dedication to animals by Ken and Alice Simmons is well known, and as advocates for police dogs, they were probably second to none,” said Anderson. “We will be forever grateful to them. Thousands of abandoned and homeless pets were saved and got the second chances they needed thanks to Ken and Alice.”
Alice met Ken, a graduate of Lake Worth High, while both were attending the University of Florida; they married in 1986. She served as the director of business and operations for the Simmons Hospital for decades and is credited with helping its success and expansion.
Before they sold the practice and retired a few years ago, they expanded it to make it a one-stop place for pet care and activities with the addition of the Barkers Hotel, the Purrington Inn, plus the swimming pools and lounge areas for dogs being boarded or attending day care.

Active in the community
Alice was an active volunteer with Best Buddies and could often be seen during the day running with her dogs throughout her neighborhood.
Lyn Tate and her husband, Rock, were neighbors and friends, too.
“She was compassionate and kind and found the best in everyone,” said Lyn Tate about Alice. “She adored her two sons, Chris and Matthew. She loved the outdoors, paddle boarding, kayaking with her beautiful dogs.”
Lyn Tate was among friends whom Ken Simmons flew to Guana Cay to surprise Alice on her 50th birthday almost 10 years ago.
“I just found the wine glass and bagged sea glass that was our party favor,” Tate said. “It put a smile on my face, as Alice loved to collect sea glass in Guana.”
Ken Simmons served as the Tate family’s veterinarian for more than a decade. Rock Jr. worked for Ken during the summers while in high school and in college.
“Ken saved our dog, Queenie, from an autoimmune disease and she managed to live five more years under Ken’s care,” Tate added.
Many speak about Ken’s efforts in 2013 to try to save the life of a retired K9 officer named Drake, a German shepherd, who had been shot five times during a home invasion. Dr. Simmons was able to stabilize Drake, but knew he needed more specialized care. He quickly loaded up Drake in his plane and flew him to a veterinary specialist at UF. Drake did not survive his wounds.
Dr. Simmons memorialized Drake by hiring artist Jocelyn Russell to create a life-sized bronze sculpture of Drake at his veterinary hospital. The base also contains the inscribed names of service dogs across the country who were killed in the line of duty or who died of natural causes.
On Feb. 11, the Lantana Town Council called for a silent moment of prayer to honor Ken and Alice Simmons.
Mayor David Stewart, also a neighbor, said, “It’s just a sad situation. Let us remember Ken and Alice, their parents, the two sons, neighbors and friends and the many animals who were their friends.”
The couple are survived by their sons, Christopher (Amanda) Simmons and Matthew Simmons; Ken’s mother, Lorraine Simmons; Ken’s siblings, Kathleen (Patrick) Day, Dale (Marian) Simmons and Patrice Antony; and Alice’s siblings, Barbara (Dale) Buzz; Suzanne (Steve) Hurst, Rita (Joe) Sammarco, Patricia (Mark) Dobson and Dennis (Lisette) McCormick.
A celebration of life took place Feb. 16. In lieu of flowers, the Simmons and McCormick families ask that donations be made to the Coral Restoration Foundation to honor Ken and Alice Simmons. Details are available at www.coralrestoration.org/donate.