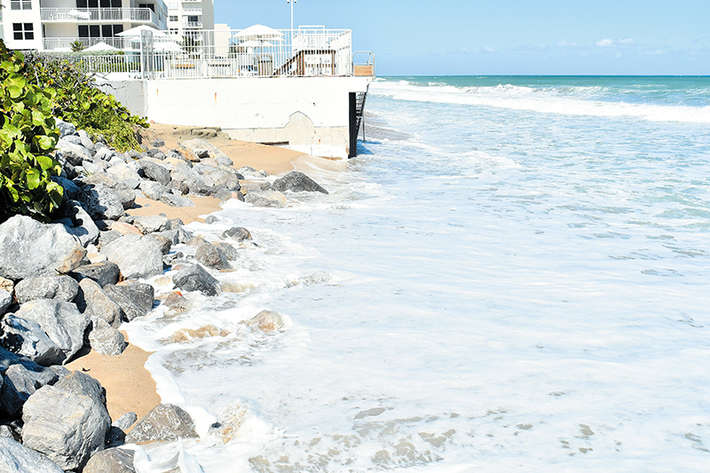 On Nov. 8, Lantana’s public beach was scoured by a heavy storm. This shows the beach south of the Imperial House. Jerry Lower/The Coastal Star

Lantana’s public beach is sand-starved, and a plan spearheaded by the town of Palm Beach aims to assuage that hunger.
Lantana officials and residents heard of the proposal during a special meeting on Nov. 3 hosted by Brian Raducci, Lantana’s new town manager. He said the town has an opportunity to partner with Palm Beach, South Palm Beach and Palm Beach County to enter an interlocal agreement for a dune restoration project.
Rob Weber, the coastal program manager for the town of Palm Beach, said the program would add sand to Lantana’s beach, similar to what had taken place in South Palm Beach earlier this year.
“There are opportunities that if we are impacted by a storm the sand can be replaced with FEMA funds,” he said. “So we are trying to work together, trying to be as smart as we can and judicious with our funds and to be able to have a program to have a beach that is healthy for everyone to enjoy.”
Palm Beach has been doing beach renourishment projects since the 1940s. The sand flow, which goes from north to south, was interrupted in the 1920s when the Lake Worth inlet was trenched.
“Ever since that point, there was noticeable erosion that occurred south of the inlet and then we started doing beach nourishment in the 1940s,” Weber said. “It wasn’t until the 1970s, when environmental regulations really took hold, that we started getting projects permitted. Our first permitted project was in midtown (Palm Beach) in 1995.”
The first project in the southern area near South Palm Beach was the Phipps Ocean Park project that was constructed in 2006.
“Each time we’ve done a beach renourishment project in the south end, we’ve also had a dune restoration, and a dune restoration is not just building a dune, but adding sand above the knee-high water line, not just placing sand into the water,” Weber said. “When you place sand in the water, you need a federal permit from the Corps of Engineers; when you’re placing sand above the knee-high water line, you only need a permit from the state of Florida.”
In 2013, a beach management agreement, the only one of its kind in Florida, was signed for Palm Beach island, regardless of municipal boundaries.
“We started implementing our program,” Weber said, “and after we had it signed in 2013, and most recently this year, we did a partial beach nourishment project in Phipps Ocean Park to restore some of the impacts we had from previous hurricanes.” At the same time, they did dune restoration south of the Lake Worth Pier between the Bellaria and La Bonne Vie condominiums and placed sand in South Palm Beach.
“The ultimate goal here is to keep adding as much sand as we can to the system to be as healthy as possible,” Weber said. “The beaches overall will perform better with more sand. … If the beaches are healthier here in South Palm Beach and Lantana, then our program will be that much better and we’ll be stronger altogether.”
Mike Jenkins, the engineering consultant for Palm Beach, said if dune projects are done in concert together over a larger area, they tend to perform better.
The proposed project would involve transportation of sand from an existing stockpile at Phipps Ocean Park and placement on the beaches of South Palm Beach and Lantana.
Jenkins said that within last year’s major nourishment project, some extra sand was reserved on the beach to distribute in dune projects this season. The work can only be done outside of turtle nesting season.
The project, expected to take two weeks, would require access to the beach to truck in and place the sand.
“South Palm Beach can’t resolve the issue just by themselves,” Jenkins said. “The town of Palm Beach really can’t solve it just by themselves. We’re going for a regional response.”
Construction would happen in January or February and would require beach closures.
“One of the critical aspects of this is if Lantana joins in this program to maintain a beach through repetitive dune projects, those projects would then become eligible for FEMA funds if there’s a declared disaster after a hurricane,” Jenkins said.
The beach at Lantana is a public beach, unlike the private beaches in South Palm Beach, and more likely to receive government money.
Some residents at the meeting didn’t like the idea that access to Lantana’s beach would be over the existing sea wall, but Jenkins said he did not anticipate damage to the sea wall. Covering it with sand and mass, he said, would preserve the wall during the process. “The contractor would be contractually obligated to repair anything if he were to damage it.”
Weber said the cost to Lantana would be zero.
“The idea is that the town of South Palm Beach would be covering that cost,” Weber said. “The town of Palm Beach is obviously doing the work, but South Palm Beach are the ones that would take on that cost in exchange for the access.”
South Palm Beach Town Manager Robert Kellogg said: “The current proposal calls on us to pay for the sand at Lantana Beach for providing access for our project.”
Kellogg said the king tides and northwest winds in November washed the sand from the first phase of the project away from the beach.
“We are assessing the volume of sand we will need in January-February. The second phase will include both us and Lantana,” he said. “As I don’t have an idea of the volume of sand needed, I can’t give you a cost.”
South Palm Beach Mayor Bonnie Fischer implored Lantana officials to consider the proposal.
“I don’t see any downsides other than a little inconvenience,” she said. “It’s just a win-win for us.”
However, some residents pointed out that closing the public beach during peak season is not ideal.
Raducci said he expects the proposal to come before the Town Council soon.