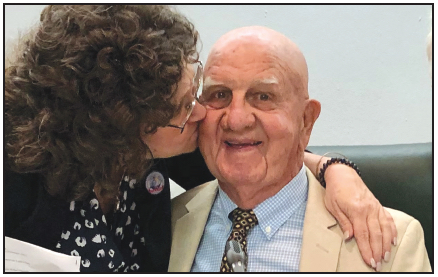 There was no celebratory cake in sight, but fellow council members and residents gave Lantana Vice Mayor Malcolm Balfour a standing ovation after the town meeting he presided over on Feb. 28. Balfour, 83, has served on the council since 2013 and is not seeking reelection.
“We want to thank you for your years of service,” said Police Chief Sean Scheller. “You’ve always been there for us.”
Town Clerk Kathleen Dominguez said how much staff enjoyed working with him and that he would “always have a friend in the clerk’s office.”
Although the current mayor, Robert Hagerty, wasn’t present that evening, which is why Balfour presided over the meeting, former Mayor Dave Stewart — who like Balfour lives on Hypoluxo Island — said, “Mr. Balfour has served his community well for nine years. Before voting, he always looked at all aspects of an issue and was a very responsible councilman.”
Chamber of Commerce President Dave Arm said Balfour has “served the town wonderfully” and thanked him for all his support.
Born in South Africa, Balfour and his wife, Ilona, have lived in Lantana since 1972, when he was hired as a journalist for the National Enquirer.
Three people are seeking Balfour’s spot: Media O. Beverly, Kem Mason and Edward P. Shropshire.

In other action, the town:
• Approved a special exception request to allow a tattoo shop at 508 W. Lantana Road.
• Approved a request from First Baptist Church of Lantana to hold Easter sunrise service at the Dune Deck Café at the beach from 5:30 to 7 a.m. on April 17.
• Waived rental fees to allow for tent installation at the Recreation Center for the Lantana Chamber of Commerce’s 27th annual Fishing Derby, May 12-15. For more details, visit www.lantanafishingderby.com/retreats.