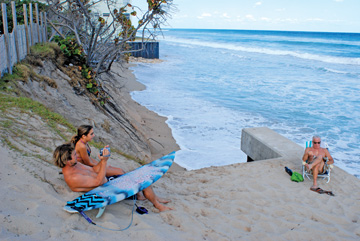 Surfers and sunbathers enjoy the portion of Lantana beach that is already protected by a seawall. Plans are under way to protect the remaining gap between the public beach and the Imperial House seawall, visible in the top center in black. Photo by Jerry Lower

Newly hired Murray Logan Construction Inc. is soon expected to start its race to complete Lantana’s seawall before turtle season, but not before it agrees to the Town Council’s condition that its equipment not cross over the town’s seawall during or after construction.
The same company that built Lantana’s seawall and that of neighboring Imperial House, Murray Logan was approved to construct the gap between the two and connect to the completed Imperial House wall for a project cost of $384,000. The company was the low bidder among six competitors for the job, for which the town had previously budgeted funds and taken them from reserves. The town will buy the supplies with its tax-free rate to save money.
“I would like some guarantee there’s no damage to our wall,” said council member Cindy Austino, who kicked off officials’ concerns on the issue. Town Manager Mike Bornstein said he anticipated no issue, that the company planned to complete the construction from the west and wouldn’t need to cross the town’s seawall.
The contractor intended to go over the dune on the north side and build the seawall from the ocean side. Before constructing the last 10 feet, however, it would move the equipment to the west to complete it, Bornstein explained. The construction wouldn’t necessitate moving equipment over the seawall.
The town was also still working with the Imperial House in South Palm Beach toward an agreement covering the connecting of the two walls. The town manager wasn’t concerned about damage to the neighbor’s wall by vibration, because Murray Logan will use a higher-grade, vibrationless procedure than it did for Imperial House.
To connect with the Imperial House wall, Lantana has to build 3 or 4 inches over the condo’s property line, according to Bornstein. He didn’t foresee a problem there either, because it’s in the best interest of the Imperial House to close the gap.
The bigger issue, Bornstein said, was that the town has a permit that says it will connect with the other seawall. “We’ve had a long relationship with the Imperial House. I think we’ll reach an agreement,” he said.
When Lantana built the first segment of its new seawall, the Imperial House didn’t have a completed seawall that the town could connect to. The Imperial House ultimately built its seawall under emergency conditions, with the sea threatening to sweep away the unprotected condo.
Lantana and the Imperial House butted heads on several occasions, when the condo wanted to run construction equipment over Lantana’s seawall. Lantana wasn’t willing to risk damage to its new wall except for a high price.
Lantana’s approval of its latest contract with Murray Logan won with two dissenting votes, from Mayor David Stewart and Dr. Lynn Moorhouse. Stewart didn’t want to add the condition and run the risk of tying the contractor’s hands, he said, complimenting Murray Logan’s performance on its previous seawall work.
While the council’s concerns centered on damage to Lantana’s seawall and bridging the 3-inch gap with the Imperial House, Bornstein pointed out that leaving enough time to get the job done is imperative, because spring — and turtle season — comes around fast. Construction isn’t permitted on the beach during turtle season because it interferes with the creatures’ nesting habits.
“I wouldn’t recommend that you delay too long,” said Bornstein, renewing a caution that’s been present through-
out seawall construction.