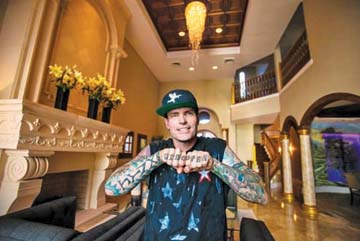 Rapper-turned TV personality Vanilla Ice renovated a $1.4 million home on Hypoluxo Island and now has it on the market for $5 million. Contributed photo

When rapper-turned-renovator Vanilla Ice and his DIY show, The Vanilla Ice Project, took on a waterfront home on Hypoluxo Island earlier this year, not everyone was thrilled.
A few residents were miffed that a large banyan tree was cut down during the renovating process. Others had a problem with traffic congestion caused by construction deliveries.
But now that filming wrapped up and all 13 episodes have aired, the prettier side of the picture is coming into focus — and that is the economic boost generated by the project.
Lantana Town Council members heard all about it June 8 from Michelle Hillery, deputy film commissioner for the Palm Beach County Film and Television Commission.
“For anyone not familiar with the show, host Robert Van Winkle, better known as rapper Vanilla Ice, renovates homes using his own money and expertise in real estate and then puts them back on the market,” Hillery said. “Rob has renovated the home located at 101 N. Atlantic Drive.”
Filming took 6½ months.
Crew members bunked for 252 nights at the Moorings Apartments in Lantana. Local contractors were used, and the crew ate at local restaurants.
Van Winkel paid $1.4 million for the house, put in between $1.5 million and $2.5 million of his own money, and has the house on the market for $5 million, she said.
The property value increase will bring more money to the town in taxes.
“The person who lived in the house before was exempt from having to pay property taxes,” she said. (The county gives 100 percent tax exemption to disabled vets or wheelchair-bound residents.) “The new homeowner will be paying roughly $100,000 in ad valorem taxes in Palm Beach County per year, contributing new money to our local services, including education.”
Season 5 of The Vanilla Ice Project had the highest ratings of any season of the show.  Film, television and digital media are key components to promoting tourism in Florida, she said.
“You just can’t buy this kind of publicity,” Mayor Dave Stewart said. “You don’t know what it might bring. ”
Stewart and other local dignitaries appeared in the final episode for a tour of the property and to watch Vanilla Ice arrive in a seaplane.