A couple of political newcomers looking to turn the tide in Lantana will have a chance to do so after handily beating two Town Council incumbents in the March 17 election.

Karen Lythgoe, the top vote-getter with 690 votes, defeated incumbent Phil Aridas, who received 487 votes for the Group 4 seat he has held since 2011.

Lythgoe, 60, said her sizable win took her by surprise.

“Everybody told me ‘you’re never going win the first time out, we wish you well, don’t take it personally, we’re not going to give you money because we don’t know that you can be elected,’” she said. “When I began to see the initial returns, I was shocked. And as it kept going I was like, wow, I’m by myself, I’m self-quarantining and I’ve got nobody to tell.”

Before long, she was flooded with calls and congratulatory text messages.

Having garnered the most votes of any of the four candidates also amazed her.

“I sent out no fliers, no door hangers and my signs were tiny,” Lythgoe said. 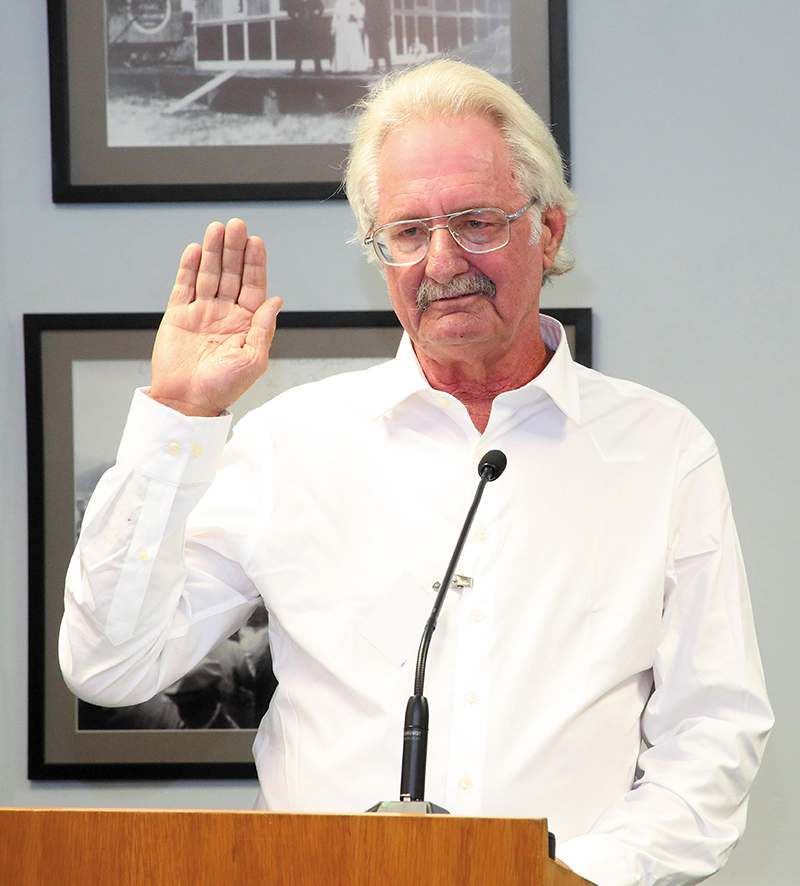 Mark Zeitler is sworn into office.

“It kept saying 80%, I was waiting on the whole thing to come about,” he said. He awakened early the next morning to see congratulatory texts from friends and fans. By 5:30 a.m., he was out collecting campaign signs before going to work.

“I didn’t know how it was going to go and he did have a pretty good team and I thought because of that it would make things a little harder,” Zeitler said of Shropshire.

Both Lythgoe and Zeitler say their first order of business will be to listen and learn what they need to know about serving on the Town Council.

“I need to understand how the sausage is made, I have questions, I have things I’m wondering about,” said Lythgoe, an IT specialist who works in risk solutions for LexisNexis. One of the things she plans to investigate is how well the town is covered as far as computer vulnerabilities. “We need to protect our data.”

Zeitler said he needs to begin finding out “what’s what and what needs to be taken care of and what things are put on the table. I want to take a look at code enforcement, the aggressiveness of it.”

One of the reasons he ran, Zeitler said, was that he felt the town and Shropshire had become too gung ho about code enforcement. The two men live across the street from each other in the Lantana Heights neighborhood.

At the swearing-in ceremony on March 23, Lythgoe brought along Sadie Smith, her granddaughter. Sadie celebrated her seventh birthday the day after the election and was so happy and excited for her Nana. “One of the reasons I ran was to show her you can do anything you want to do,” Lythgoe said.

Another birthday was not as joyful.

Aridas, a county park ranger, turned 66 on election day but didn’t quite get the present he hoped for — another three-year term. He took the news well and appreciated all the kind words he received from residents who called him to say they were sorry he lost.

“I had nine years in there, and it was a great experience,” Aridas said. “I thought the voter turnout was kind of lousy, but you just never know about an election. I hope everything goes very well. There’s some very important things coming up in the town and I hope they’re handled right.”

Shropshire, who did not return calls as of press time, encountered a rocky road in his quest for second term.

In January, he was told by town staff that he had not qualified for the election, that his name would not appear on the ballot and that Zeitler won by default. Shropshire, 67, had not turned in the petitions from registered voters necessary to qualify, although the County Supervisor of Elections Office certified he had them and he was cleared by the former town clerk as having checked all the necessary boxes to qualify.

After Shropshire challenged the decision in court, a circuit judge ruled that he could remain on the ballot.