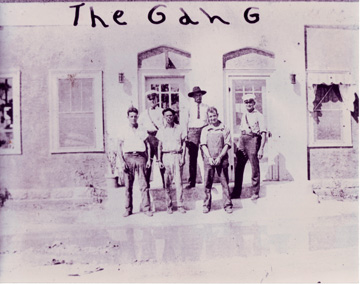 1921 — Town of Lantana is incorporated with a population of 100 residents.


Jan. 12, 1925 — Daniel McCarly becomes the town’s first police chief. In January 1927, McCarly and the town’s past treasurer are held on charges of disturbing the peace during a commission meeting and the Lake Worth marshal is called to collect his badge
and gun.


Jan. 25, 1927 — Homer Jonesis named police chief. One month later, McCarly
is returned as police chief. In 1933, Mayor Clyde Brown suspends McCarly for
“misconduct in office and neglect of duty” prior to an audit of town finances.
By 1935, McCarly is reinstated and elected to the position of chief of police
and continues to serve in that capacity for a total of 14 years.


1945 — The town no longer maintains a full-time police officer and depends on the services of officer Dewey Morris from the Manalapan police force in emergencies.


September 1946 — Norton returns as full-time police officer. He submits his letter of resignation on May 5, 1947.


May 16, 1947 — George Pagliaro is appointed police officer. The next month he is suspended for insubordination following allegations of an abusive arrest.


Nov. 10, 1948 — Retired New York policeman Max. A. Mergenthaler
is appointed police chief. In 1953, Mergenthaler is cleared of charges of
unbecoming conduct after it was found there was insufficient evidence he had
purchased a pistol from the defendant in a barroom brawl when it should have
been held as evidence in a case against the man. At this point the Police
Department is at full strength with a chief and two officers. In March 1954, Mergenthaler is relieved of his duties after it is said his term is expired.


March 28, 1954 — Retired New York Police Officer Edward Weiskopf is appointed police chief. In 1961, he is relieved of duty by a 3-2 vote after being accused by Mayor Charles W. Brown of insubordination, failing to carry out a directive, cursing and counter-charging Brown with harassment.


April 24, 1961 — Edward W. Kinsley is appointed police chief. He had been on the police
force since 1954. In 1964, Lantana Town Council fires Kinsley, who had previously resigned his position then asked for his resignation to be rescinded after a petition by residents bearing more than 600 signatures was presented. Council members declined to comment on their charges against the chief saying, “It is up to the chief’s discretion whether he makes the reasons public.” Kinsley later files a lawsuit against the administration opposing his firing.


April 8, 1964 — Howard Phillips is named acting police chief. He had been with the force for three years. In October, Phillips quits after being relieved from duty by Mayor Harry L. Seaman after he signed a controversial statement allegedly implicating members of the previous administration. He later returns to the force as a patrolman.


Oct. 27, 1964 — Alfred Bock is named town police chief. In November 1966, Bock resigns to become the sole police officer for the city of Atlantis.


Dec. 3, 1966 — Joseph Boucher is appointed police chief by unanimous vote. Two patrolmen quit the force questioning Boucher’s qualifications for the job. In February 1967, the Lantana Town Council relieves Boucher of his duties for “gross insubordination.” He later files suit in Palm Beach County Circuit Court seeking reinstatement alleging he was removed from his position illegally and without justification. In July 1968, Boucher resigns to become a deputy in the Palm Beach County Sheriff’s Department.


May 10, 1967 — Kenneth T. Jones is named new police administrative officer until litigation concerning former Police Chief Joseph Boucher is resolved. Jones joined the force after retiring from the New York City Police Department after 20 years of service as a deputy inspector. In January 1968, Jones is accorded a vote of confidence and
confirmation that his job with the town is secure although town ordinances require that chief should reside in the town. Jones resigns in March 1971. In August 1972, he becomes police chief in Highland Breach.


April 1971 — Daigneault, now a sergeant, is named police chief. He had been an officer on the Lantana force since 1964. By 1972, the size of the police station doubles and staff increases to 11, including six reserve officers and four dispatchers. The first woman dispatcher is hired. In March 1981, Daigneault resigns under fire for what is seen as a lack of leadership.


June 4, 1987 — William Carson is named police chief after holding the job on a temporary basis for six months.


1995 — Officer Robert Chalman is named police chief when Carson retires. In February 2001, Chalman steps down as chief to take a position with the United Nations International Police Task Force is Kosovo. He had worked with the Police Department for 20 years.


Sept. 27, 2010 — Capt. Jeff Tyson is promoted to police chief. He was a member of the Lantana Police Department for 11 years. He had worked previously with the Delray Beach Police Department and the Palm Beach County Sheriff’s Office.