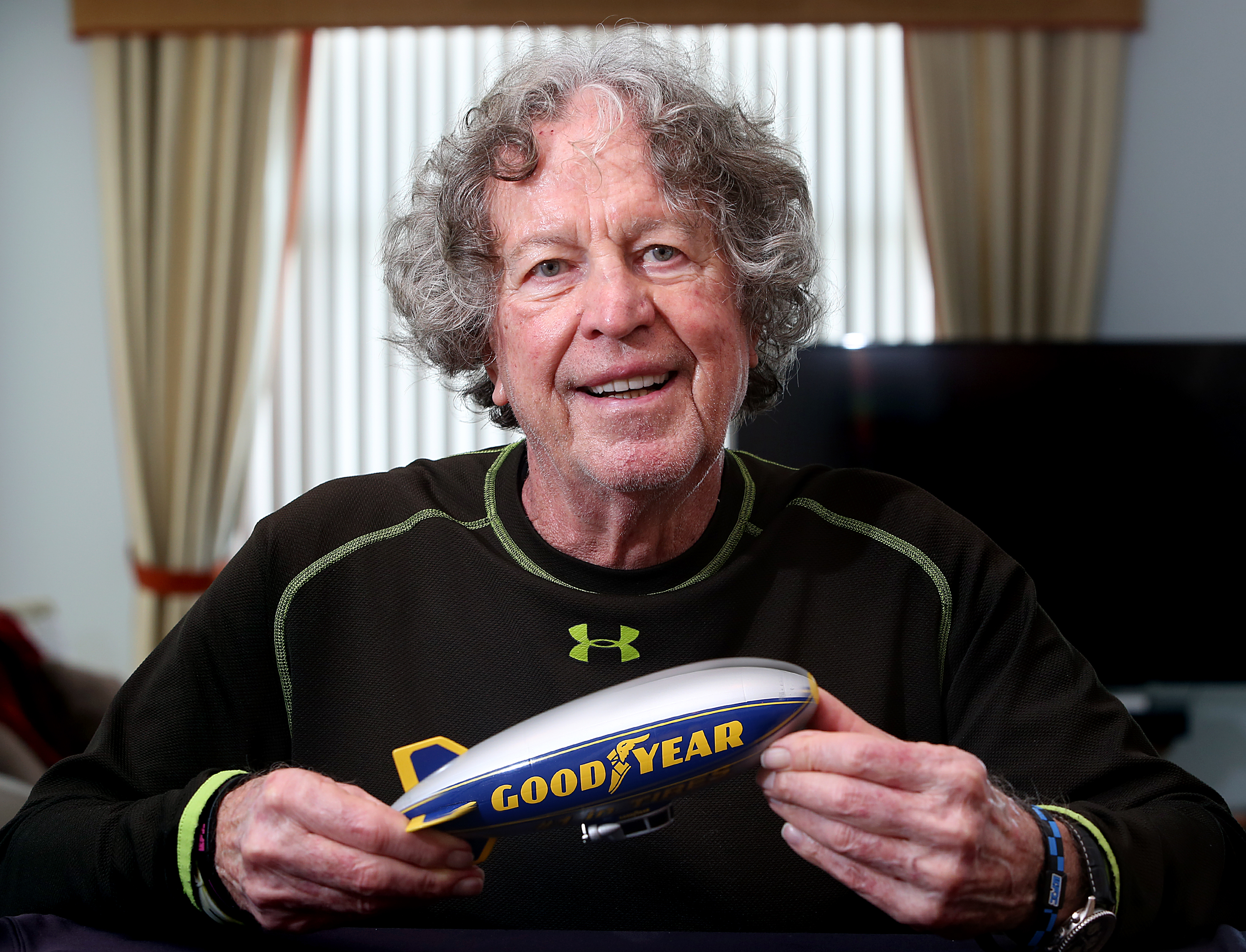 Don Ploskunak’s flying infatuation began 70 years ago when he would stare and wonder as crop dusters sprayed the Ohio farm fields he was working.
This boyhood desire to become a pilot grew into an obsession and landed him in the gondola of the Goodyear blimp. That began a 38-year career in which he was among the innovators in pioneering Goodyear’s sports coverage.
Today, sporting events are big only if a blimp is overhead, providing majestic television footage for millions of viewers. In recognition of this contribution, the College Football Hall of Fame will make the Goodyear blimp an honorary member as part of its 2019 induction class.
“Don is one of the most influential figures in the history of sports broadcast,” said Mike Wittman, a Sports Broadcasting Hall of Famer who worked with Ploskunak, “because he did it right from the beginning and his suggestions laid the groundwork for blimp coverage.”
Ploskunak is a bit more humble about the level of his contributions, saying he was just doing his job.
“Well, nobody else was doing it,” he said. “We were the first. But I was doing the assignments that are provided by the Goodyear Tire & Rubber Co., doing the flying we were asked to do as a team.”
Ploskunak, 78, has been a Lantana resident since 2011. He still maintains his pilot’s license and Basic Medical certificate and has other ties to South Florida going back to the 1950s and early ’60s, when he played football at the University of Miami.
“Let’s put it this way,” Ploskunak said, “I was on the team for five years. I hurt my knee my senior year in high school and medicine was not what it is today. I was a good scout team quarterback in practice.”
Five years after graduating from UM in 1963, Ploskunak learned from his father, John, an engineer with Goodyear Aerospace, the manufacturer of the airships, that Goodyear was hiring blimp pilots. Ploskunak got his license in 1969, the same year he met Wittman, and the sports coverage from the blimp was on its way. Ploskunak finally retired in 2006.
Wittman, known as the father of sports aerial broadcasting for his work in developing the Goodyear blimp’s role, captained and starred for the Canes basketball team in the 1960s and is in the UM Sports Hall of Fame.
“I got all the publicity, but Don was extremely influential,” said Wittman, 74. “He was a great television pilot because he understood sports. He probably covered 500 football games.”
Ploskunak said it was closer to 50 games, but covering pro and college football was only part of his assignments. Ploskunak covered the World Series, NASCAR, the Indianapolis 500, America’s Cup races, tennis tournaments, golf events, state fairs, concerts and fireworks celebrations.

Not just sports
Airships also covered disasters. After Hurricane Andrew hit Miami in 1992, Goodyear blimps were in the air for two weeks with messages in three languages flashing information to people on the ground. Ploskunak was with the team of pilots and officials that coordinated coverage of Andrew, although he did not actually fly over devastated areas. Blimps were at the 1989 World Series in San Francisco when an earthquake hit before Game 3, and they flew for weeks transmitting messages and detailing destruction with television cameras. 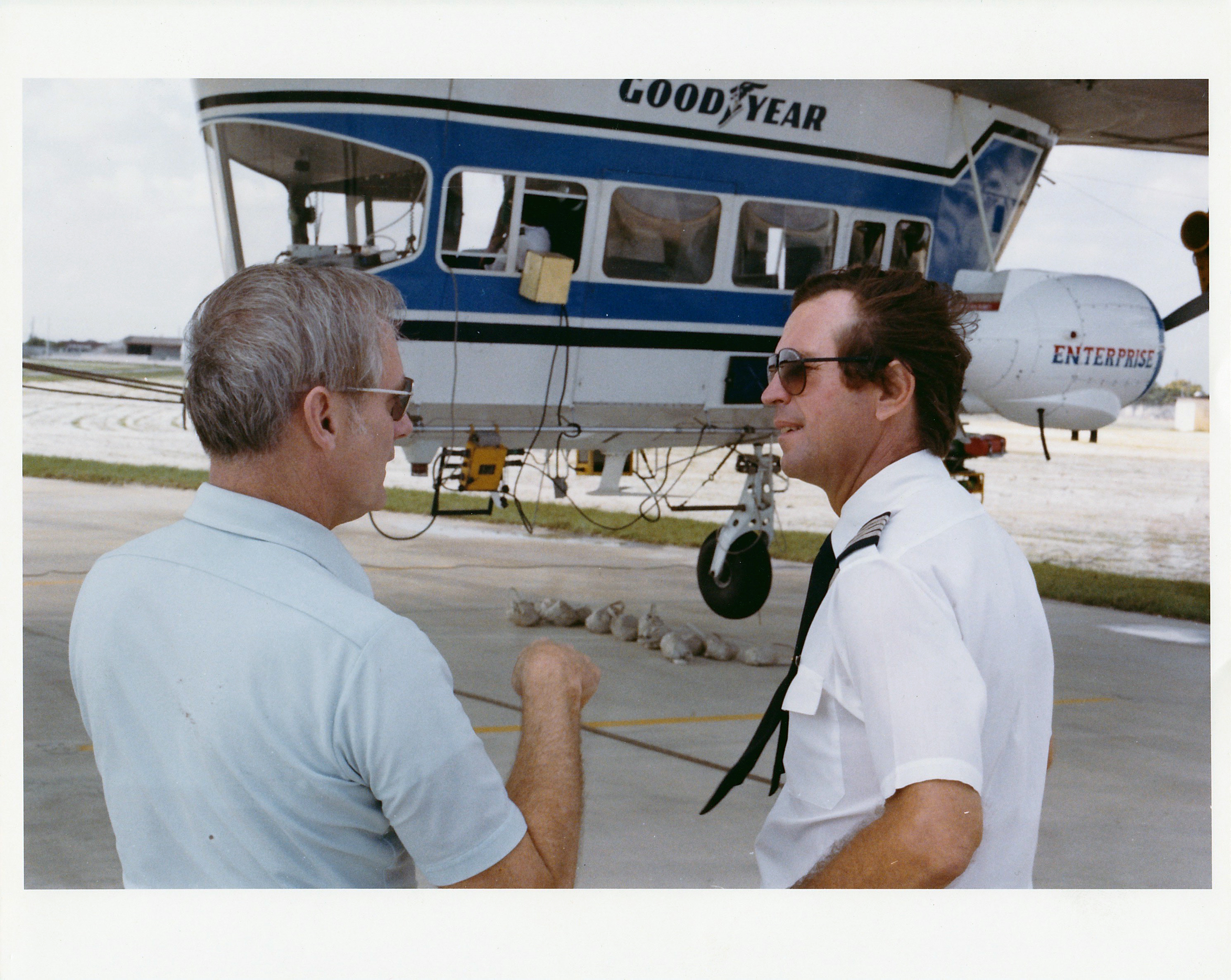 Traveling to all these sporting events and other scheduled functions was the heart of what Ploskunak did for 38 years.
“We traveled 190-200 days a year,” Ploskunak said. “Well, it was a different hotel every night. We had a huge schedule and we built it around the NFL and college football schedules and the NASCAR schedule.”
His travel team consisted of four other licensed pilots, 15 ground crewmen and public relations rep, a semitractor-trailer with all the equipment and spare parts and a large custom-built tour bus with a portable mooring mast, which carried luggage and served as an office.
Travel was slow — 250-300 miles per day. The ground crew would get to the landing spot early to set up for the blimp’s arrival.
Landing did not require an airstrip or runway, just open space. The pilot would fly the blimp toward the ground crew, which had secured and anchored a mooring mast to the ground. Ropes and tethers would then secure the blimp to the mooring mast and the ground. 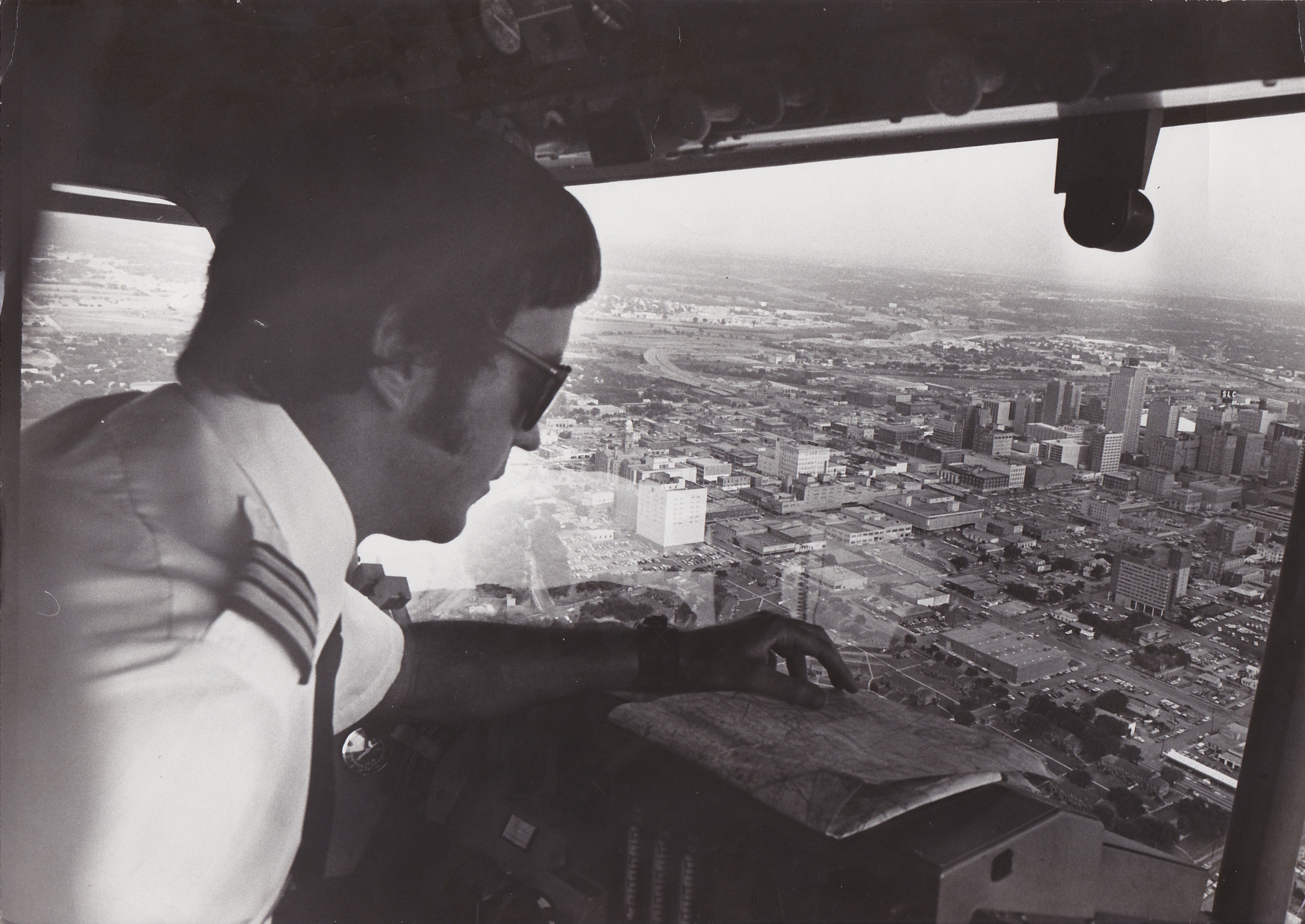 ABOVE: Don Ploskunak studies a sectional chart while flying the blimp over the construction site of the Dallas/Fort Worth airport in the early ‘70s. BELOW: The blimp’s traveling crew usually consisted of four other pilots, 15 ground crewmen and a PR representative. Photos provided 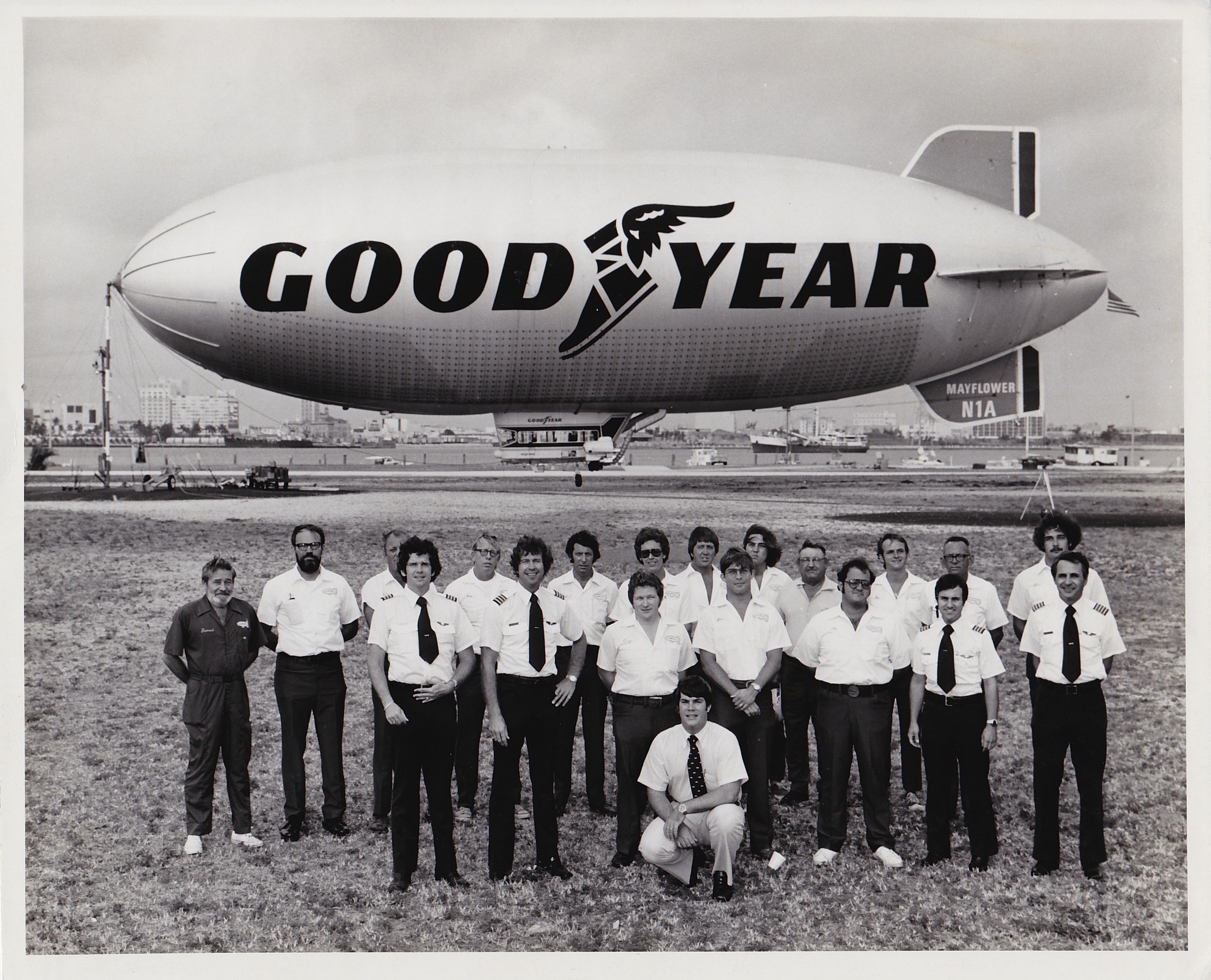 There was typically little rest for crew members after they traveled and the blimp landed. Everyone seemed to know the blimp was making a stop and lots of people wanted a close look.
“You cannot sneak a blimp into town,” Ploskunak said. “Everybody knows when we are coming. And all the local newspapers were there. We used to have contests to see who could get the most stories in local newspapers.”
Ploskunak quickly became a star.
“Don was a celebrity,” Wittman said. “He was big time. There weren’t many places we went that there wasn’t a front-page article about the blimp being there and the pilot. He must have done a couple of thousand interviews in his lifetime. Because at one point there were more astronauts than there were blimp pilots. At one time, there were only like 10-12 blimp pilots in the world and he was one of them. He was a great interview.
“The people loved him. They requested him all the time. I was kind of the face of the whole deal but Don was the guy. I would bring him to meetings and introduce him to the directors and producers of the television networks, and they all fell in love with him. And there were a lot of groupies. Don kept that legend alive.”
Ploskunak, who has remained single all his life, did not call them groupies — rather followers.
“Sports stars have their own following,” Ploskunak said. “There are some people who are blimp followers. They know everything about blimps. You run into them everywhere. You have some people who just follow blimps everywhere they go.”
But at every stop, the news media wanted an interview or pictures or someone to accept a key to the city.
“I probably had about 10,” Ploskunak said of the symbolic keys. “I gave them all away. I don’t know how many I had to the city of Miami. Every time we could come back and I would get one from Miami. Pompano we would get them, Houston, Indianapolis, Allentown and Hershey, Pennsylvania, almost every place we would go. That was the big thing at that time.”
“Don was a no-nonsense leader,” Wittman said. “He was a good leader of men. Made tough decisions and did it well. We had about 25 guys traveling with us and he was in charge of all of that. Plus he had a thousand girlfriends.”

Tense moments
Ploskunak’s career was not without some anxious moments in the gondola. One happened in Indianapolis as he was coming in for a landing, trying to beat a storm that had just formed.
“We got real close but the storm beat us,” Ploskunak said. “And suddenly it hit us and we started going 50 miles per hour backward and there is nothing we can do about it — just ride it out.”
Another happened in Houston after he took some University of Houston football players on a ride.
“We made a landing to change passengers and when we did, all of them jumped out of the cockpit,” Ploskunak said. “And some of them were linemen, 260-270 pounds. And when the ship suddenly lost all that weight, it shot straight up in the air. It took me three or four tries to get it back down to the ground.” 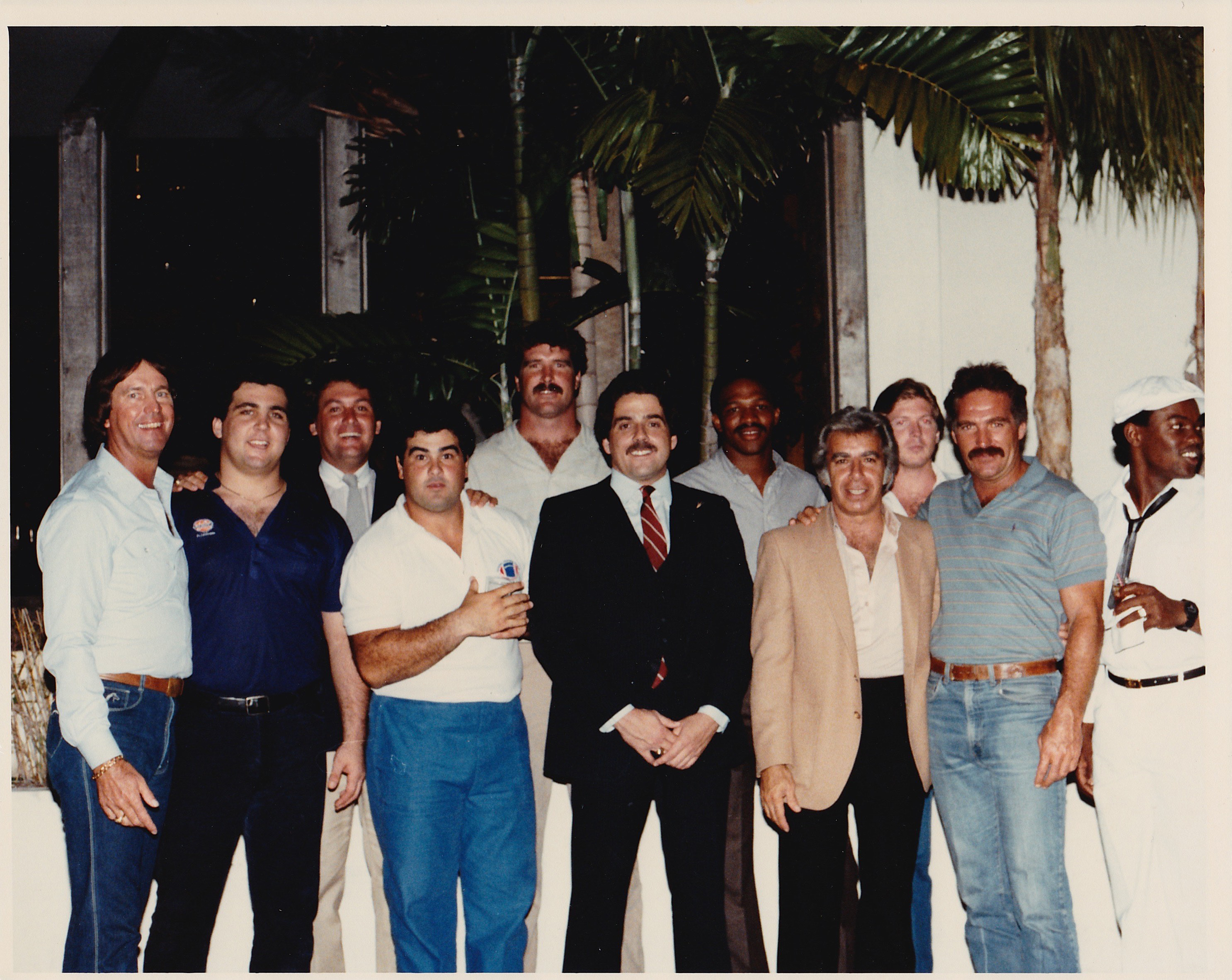 Ploskunak also flew hundreds of tour flights for celebrities and sports stars.
“The most interesting was Johnny Cash,” Ploskunak said. “I spent about one hour and 15 minutes with him in Columbus, Ohio, between his performances at the Ohio State Fair. He wanted to fly over the prison where he gave a performance that morning. He was interested in the audience at the fair in the venue hours before he would perform.”
Ploskunak piloted tour flights for race car drivers Rick Mears, A.J. Foyt and other Indy 500 pole-position winners, some Miami Dolphins, and television personalities.
He coordinated blimp coverages in the 1977 movie Black Sunday starring Bruce Dern and Robert Shaw.
“In one of the first Monday Night Football games we covered, Firestone was one of the advertisers,” Ploskunak said. “But the announcers kept talking about the Goodyear blimp throughout the telecast. I’m sure there were some unhappy people at Firestone the next morning.”
The Goodyear blimp is such a staple in college football that the National Football Foundation’s College Football Hall of Fame in Atlanta will induct the blimp at a ceremony in December. The blimp will be the first nonplayer or noncoach to be inducted.
Goodyear’s sporting event coverage, according to GoodyearBlimp.com, began with the Rose Bowl: “On Jan. 1, 1955, using camera and microwave transmitting equipment provided by NBC, the Enterprise V became the first aerial platform to provide a live television picture of a nationally televised program when it broadcast the Tournament of Roses Parade in Pasadena, California.”
In a 2013 article published on CBSsports.com, Eric Kay wrote, “The first-ever event covered by the Goodyear blimp was the 1955 Rose Bowl. Ohio State beat USC 20-7.”
Regardless of the first telecast from a Goodyear blimp, Ploskunak had his hands on his share of them and earned a number of job promotions. In 1979 he became chief pilot/flight examiner. In 1986 he was named assistant manager of airship operations, and in 1990 he was promoted to chief pilot/manager of training for all three Goodyear airship bases. He held that position until he retired.
In a 1988 story in the Akron Journal, Ploskunak said being an airship pilot is the second-best job there is. He said he was “still looking” for the best job.
“I found it 13 years ago,” Ploskunak said in 2019. “Retirement is the best job.”