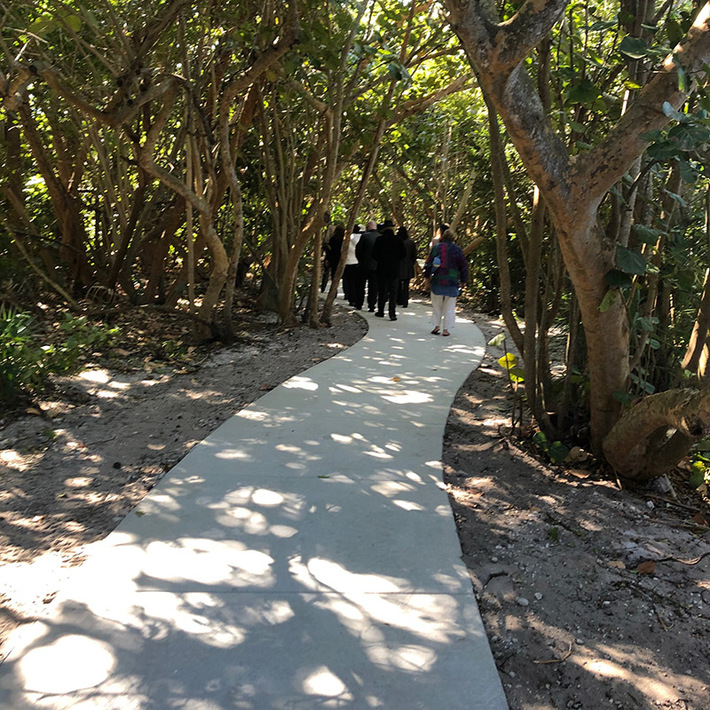 The Lantana Nature Preserve reopened Feb. 3 with a new concrete trail. Another 350 feet of the trail remains to be done. Mary Thurwachter/The Coastal Star

On Feb. 3, town officials reopened the Lantana Nature Preserve with a new 6-foot-wide concrete trail.
The old pathway, and the entire 6½-acre preserve at 440 E. Ocean Ave., were left in shambles by Hurricane Irma in 2017. After years of debate on what kind of material to use for the walkway, the Town Council agreed on concrete last March. The original trail was made of shale rock, which had washed away over the years. Pressure-treated wood, pavers, asphalt and gunite sand had all been considered before the town settled on concrete.
Although the Town Council had asked that the entire pathway be installed at the same time, one section on the north end still remains to be done.
The north portion of the trail is bordered by mangroves and other aquatic vegetation in the waterway that is protected under various environmental regulations, according to Eddie Crockett, the town’s operations director.
“To expedite the construction and subsequent opening of the path and get a usable amenity for the community up and running quickly, we broke the construction of the path into phases,” Crockett said in an email.
The first phase is complete.
“Phase II will be the remaining approximately 350 feet on the north side of the Nature Preserve,” Crockett wrote. “The permit for Phase II was submitted in December 2020 and we hope to get it approved this spring and start construction shortly thereafter. Once we get an approved permit, the construction will be quick and the Nature Preserve will remain open during construction.”
Crockett added: “As far as those who use the Nature Preserve that are mobility challenged, they can use the northernmost east/west path connector to avoid the unpaved portion of the trail and still enjoy a significant portion of the amenity.”
In November, American Design Engineering Construction Inc. was awarded the contract to build the concrete path and repair the retaining wall at the preserve for $144,494.
The preserve is open 7:30 a.m. to 5 p.m. daily.