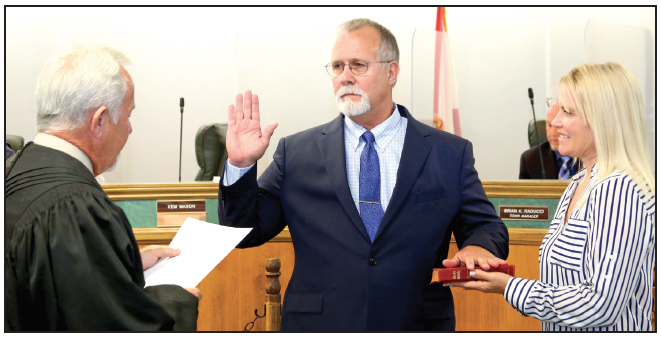 Incumbent Lynn “Doc” Moorhouse and newcomer Kem Mason claimed their seats on the Lantana Town Council during the March 28 council meeting — but it took voters two trips to the polls to get them there.
Runoff elections became necessary when no candidate in either contest received a majority of the vote on March 8.
Moorhouse, a retired dentist who has been on the council since 2004, reclaimed his Group 1 seat during the March 22 runoff with 595 votes (59.26%) compared to John Raymer’s 409 (40.74%). Raymer, a 21-year Army veteran, manager of Ace Rental Place and a political newcomer, survived a March 11 recount where he bested a third candidate, Joe Farrell, a commercial flooring distributor, by just 5 votes to make the runoff.
In the Group 2 runoff, Mason, a retired firefighter and the town’s volunteer Santa, pulled in 607 votes (59.05%) compared to Media Beverly’s 421 (40.95%). Beverly, a Hypoluxo Island resident, is a retired business manager and longtime council watcher. A third candidate, former council member Ed Shropshire, was eliminated after collecting the fewest votes of the three.
David Fina, a judge for the Third Judicial Circuit of Florida in Suwannee County and a longtime friend of Mason’s, swore in both men.
“I want to thank everyone who supported me — and those who didn’t support me — for getting out and voting,” Moorhouse said. “I will do my very best to be the spokesperson for the people that live in Lantana.”

Campaign flyer controversy
At the council meeting, Moorhouse came under criticism for a controversial flyer he sent out days before the runoff that depicted former Mayor Dave Stewart as “The Godfather” pulling the strings of Raymer, council member Mark Zeitler and Erik Kip, a Vietnam veteran and one of the administrators of I’m a Fan of Lantana, FL — a Facebook group quite vocal leading up to the election.
The flyer even put words in Stewart’s mouth, showing him saying, “I’m so mad I’m not mayor anymore.”
Ilona Balfour, the wife of retiring Vice Mayor Malcolm Balfour, said “the friendly little fishing village” she and her husband moved to 50 years ago had sunk to a new low with the flyer she held in her hand. She said it “was filled with accusations, innuendo and nastiness and not always the total truth.”
In victory, Mason said being on the council represented a natural progression to his years of volunteer work and said he hoped to be the kind of public servant the late Colin Powell encouraged people to be. “I want to thank you for your support,” he said to his followers.
Moorhouse and Mason collected — and spent — the most money of the six candidates, according to their campaign finance reports. As of March 18, Moorhouse raised $19,305 and spent $6,250.32. Mason raised $18,435 and spent $15,209.86.
Their runoff opponents didn’t even seek cash contributions. Raymer asked for prayers. Beverly turned down donations and self-financed her campaign, saying she did not want to owe anyone anything. Her team members, she said, were “boots on the ground” going door to door for votes.

Sign stealer a surprise
A large portion of Moorhouse’s and Mason’s campaign spending went to campaign signs and some of them went missing. Police investigated the disappearance of all the candidates’ signs on Lantana Road during the wee hours of Feb. 23 — but found the culprit was a landscaper who had no interest in local politics.
Police Chief Sean Scheller said officers tracked down the sign stealer, who drove a pickup truck, after they were able to see his license plate number on a video recording. The landscaper from west of town collected the signs, repainted them and used them to promote his business, the chief said.
“No charges were brought,” Scheller said. But the three candidates who filed complaints — Moorhouse, Mason and Shropshire — received a small amount of cash in compensation from the landscaper.

Library update
In other news, the council learned remodeling work on the library has yet to restart after construction halted in December, when it was discovered that the main contractor, Sierra Construction Management & Remodeling of Weston, was operating without a license.
The town planned to transfer the job to a subcontractor, Multitech Corp., but that company has been unable to provide the necessary documents to be a viable vendor for the town, according to Town Manager Brian Raducci.
Raducci said staff is talking to West Construction of Lantana to finish the job. West was the second-lowest bidder when the contract was awarded in July. West bid $883,932, compared to Sierra’s $723,200.
Between the higher bid price, increased prices for materials and supply chain issues, the change in contractors will be costly, Raducci warned.
Eager to see the project completed, Mayor Robert Hagerty asked Raducci to be sure to get a timeline from any new contractor.
The library has been at 205 W. Ocean Ave. since the early 1990s. Before that, it was housed in the former bridge tender’s house on Ocean Avenue since 1947. The Recreation Center at 418 S. Dixie Highway is the library’s temporary home.
Once the renovation is complete, the Ocean Avenue library will have ADA-compliant restrooms, a centralized circulation desk, special spaces for children and teens and a community center for adult activities.
Joel Cortes, the assistant director of public works whose duties included overseeing vendor contracts, was placed on administrative leave in mid-January and resigned March 3. Human Resources assistant director Myila Young would not say if Cortes’ departure had anything to do with the library contract verification oversight.