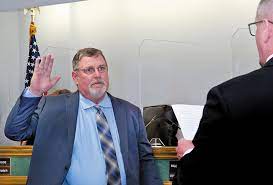 Hagerty, 57, has served since March 2021 after defeating 21-year incumbent Mayor Dave Stewart. Hagerty, a former police officer, spent most of his career working in Lantana.

“I had no intention of going back to work when I retired [from the Police Department], and here I am working on a second career,” Hagerty said. The new job in construction means relocating to Orlando, something he plans to do by Oct. 10. He said he brought the topic up because the next town meeting is Oct. 24, after he will have left Lantana.

He thanked town staff, fellow council members and residents for their support and said the decision to leave came “after a lot of thought and discomfort” on his part.

Unlike previous budget meetings and hearings this year, where residents have been largely vocal about their distaste for raising taxes, the Sept. 21 meeting was sparsely attended.

“I wish more people were here to have said this to,” Hagerty said. “I thank everybody in attendance tonight.”

Reached by phone after the meeting, Vice Mayor Karen Lythgoe said Hagerty’s announcement came as “a big surprise” that night, although she had expected it for a while. “I just figured the work was getting in his way and he was getting torn both ways. I expected it before now and as time had gone on, I thought well, he’s just going to keep going to the end of his term,” she said.

Lythgoe is acting mayor temporarily, she said. “The seat will go on the ballot in March, when my seat is up also.” She hasn’t decided if she will run to complete the unfinished mayoral term or to retain her council seat. She can’t run for both.

Lythgoe has expressed interest in becoming mayor one day but says she hasn’t decided when to do that — now, or after completing another term should she be reelected.

“Max [Lohman, the town attorney] will give us the details [of what comes next according to the town charter] at our next meeting,” she said.

Hagerty didn’t respond to The Coastal Star’s request for further comment. He has come under fire for missing multiple meetings since his tenure began in 2021. Mayoral terms are for three years in Lantana, as are terms for council members.