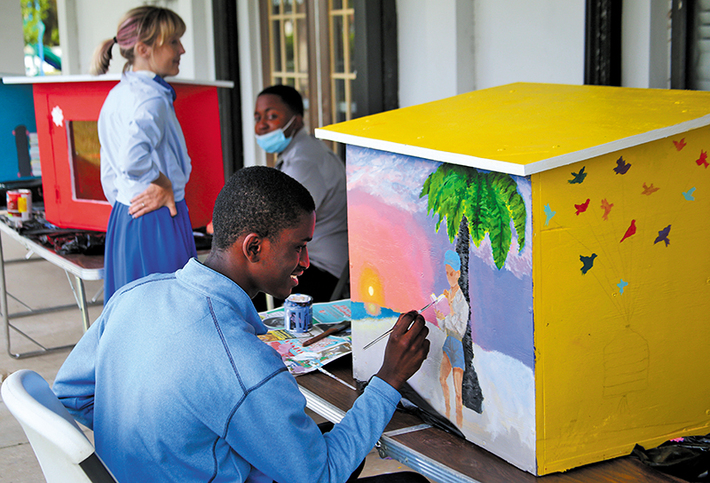 Joseph Jean paints a scene of the Barefoot Mailman on a tiny library while library director Kristine Kreidler talks with Jonathan Simplice, who takes a break from his painting. They were among volunteers building and painting the structures; a $3,000 grant will buy books. The six libraries will go into town parks and the Recreation Center. Tim Stepien/The Coastal Star

The Lantana Public Library is getting bigger.
And smaller.
As workers labor to complete an $811,000 expansion to the library building at 205 W. Ocean Ave., director Kristine Kreidler is overseeing the installation of six small branch libraries all around town.
Very small branch libraries.
Extremely small.
The Little Free Libraries are coming to Lantana. When the renovation is completed in March, the main library will be about 1,000 square feet larger, with a centralized circulation desk, special areas for children and teens, and a new meeting room where the former bank’s drive-thru used to be.
By early January, however, a half dozen Little Free Libraries, colorfully painted wooden houses with doors and windows, will already have appeared, filled with books free for the taking.
Look for them at Maddock Park, Bicentennial Park, Municipal Beach Park, the Nature Preserve, McKinley Park on Hypoluxo Island, and the town’s Recreation Center at 418 S. Dixie Highway, where the library is temporarily housed during construction.
“Take a book,” passersby will be urged. “Leave a book.”
The Little Free Libraries are being paid for by a $3,000 grant obtained from the American Library Association by Lantana librarian Jane Smith.
The grant had been expected to pay for only the construction of the miniature libraries until Hypoluxo Island resident Gene Work volunteered to build them.
The painting was done by students from South Tech Academy and local elementary and middle schools.
“I painted the sailboat on the red box that’s going in Bicentennial Park,” Kreidler boasts, then pauses. “But we may hire a real artist.”
With the libraries built and painted by volunteers, the entire grant will buy books to fill them. And because the libraries are little, top priority will go to books for little people.
“We’ll have adult books, too,” Kreidler is quick to note, “but all the studies agree on the importance of early access to books in a child’s development. It’s not easy for a lot of kids to walk to our library, so this is an easy access to encourage reading.”

Original library was small
With the arrival of the Little Free Libraries, local historians will recall that the town’s original library was also very little.
In 1947, the Lantana Woman’s Club initiated today’s library with a lending collection of 900 books, donated by the Society of the Four Arts in Palm Beach and housed in the Lantana Community Church on Oak Street.
By 1951, both the book collection and church membership had grown so large a new location was needed. The town (pop. 773) couldn’t afford to build a library, and the Woman’s Club couldn’t afford to rent space.
Fortunately, there had been a hurricane.
A 1947 storm had destroyed the wooden bridge to Hypoluxo Island, and when a new, concrete bridge was built, the wooden bridge tender’s house, which survived, was moved to a spot by the waterway.
In 1952, the Town Council leased that small house to the Woman’s Club for $1 a year, and again volunteers appeared to spruce up the house and build shelves and furniture.
Today’s library building arrived in 1995, purchased by the town for $226,000 after the Carteret Federal Savings and Loan succumbed to the financial crisis of the late 1980s.
The original bridge tender’s house is now at Yesteryear Village at the South Florida Fairgrounds.

A global initiative
The international Little Free Library project grew from equally humble beginnings.
In 2009, a man named Todd Bol built a model of a one-room schoolhouse and stuck it on a post in the front yard of his Hudson, Wisconsin, home as a tribute to his mother, a schoolteacher who, of course, loved books.
Friends and neighbors wanted one. Bol built more.
When Rick Brooks of the University of Wisconsin at Madison saw Bol’s miniature libraries, he brought a bigger idea to the little project.
In the early 20th century, multimillionaire Andrew Carnegie — of Hall fame — had paid to build 2,508 free public libraries. Brooks and Bol decided they would try to establish 2,508 Little Libraries by the end of 2013.
They beat their goal by a year and a half, and today the Little Free Library organization (littlefreelibrary.org) boasts more then 100,000 LFLs all over the world.
Now six of them are in Lantana.
“I’m excited,” Kreidler says. “We’d like people to bring back the book they take and donate one of their own books for others to enjoy, but you don’t have to.”
And she’s not stopping there.
The library has already secured a state Library Services and Technology grant for $50,000 to install a “radio frequency identification device” — a code reader that scans books for checkout or to find misplaced titles on the shelves.
Kreidler would also like to establish a StoryWalk in the Nature Preserve, a series of 30 panels that tell a different story every month.
“And more little libraries, of course,” she says.

Lantana librarian Jane Smith is a freelance contributor to The Coastal Star.