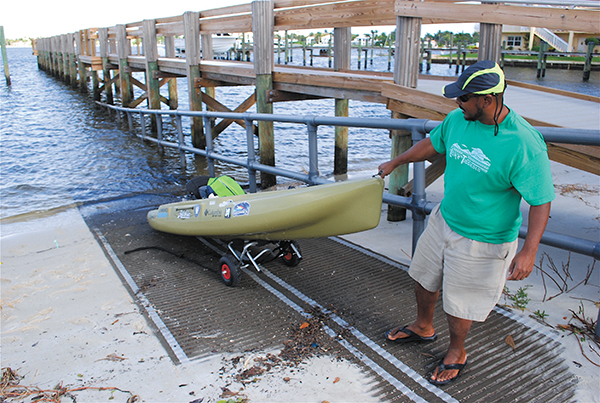 at Lyman Kayak Park after an afternoon of fishing.

Those who enjoy the quiet relaxation of paddling a canoe, kayak or paddleboard on the Lake Worth Lagoon have a special place to launch in Lantana now.
The town opened Lyman Kayak Park in September, creating a place for paddlers to slip their human-powered vessels into the water away from the bustle of Sportsman’s Park, where the launch ramps are used mostly for powerboats.
The park’s 30 parking spaces also serve the patrons of shops and restaurants along Ocean Avenue. The park is at 106 N. Lake Drive, about a block north of Ocean Avenue. Parking is free but limited to three hours.
In addition to a kayak launching area and parking lot, the park features a 180-foot pier overlooking the Lake Worth Lagoon, open space covered with grass, bicycle racks and benches.
No dogs are allowed in the kayak park because of an ordinance that prohibits pets at all town facilities (except the dog park at Maddock Park on West Drew Street).
Even though it’s close to the traffic of Ocean Avenue and is flanked by waterfront condos, Lyman Kayak Park offers visitors a taste of nature. On a calm December afternoon, mullet flipped on the water’s surface near the pier and ospreys whistled overhead.
“It’s just a lovely little spot and something I hope the residents will use,” Vice Mayor Phil Aridas said.
Aridas said the location is good for launching canoes, kayaks, paddleboards and other non-motorized vessels because it’s away from the powerboat traffic of Sportsman’s Park yet close to the small artificial reefs designed to attract fish to the waters around Bicentennial Park.
The kayak park also is within reasonable paddling distance of the Snook Islands Natural Area, a group of man-made mangrove islands near the Lake Worth golf course that has become a haven for fish and birds and a destination for paddlers.
Aridas said the kayak park is one of the town’s hidden natural gems, similar to the Lantana Nature Preserve at 440 E. Ocean Ave.
The town tapped money from reserves to buy two waterfront lots for the park, spending $1.2 million in 2011. Financial help from the Florida Inland Navigation District helped the town develop the land into a park.
The town is working with Palm Beach County to plant mangroves on the north and south sides of the park’s sandy beach. The mangrove planting, expected later this year, should help separate the park from neighboring condos.