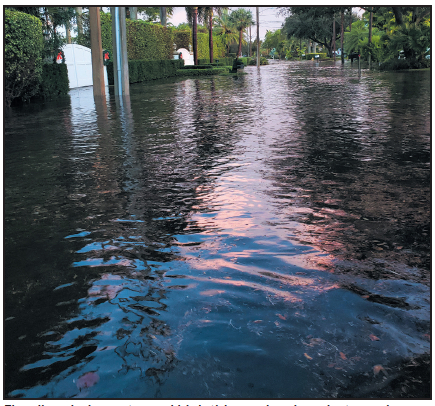 In its effort to mitigate flooding on Hypoluxo Island — a community long plagued with swamping during intense rainfall and king tides — the Lantana Town Council agreed to spend $33,314 for an engineering study to come up with possible solutions.
Eddie Crockett, the town’s director of operations, told the council at its March 14 meeting that staff met with residents and engineers from Baxter & Woodman and “determined that a study of various drainage areas was prudent.”
The study would wrap up the needs for the entire Hypoluxo Island, Crockett said. Staff “recently completed the analysis of Southeast Atlantic Drive and this one will take care of Lagoon and Barefoot Lanes, Beach Curve, North Atlantic Drive and portions of South Atlantic Drive,” he said.
But some island residents said they hadn’t heard of the meeting with staff and engineers.
“You didn’t mention South Atlantic Drive where I am and we do have flooding down there occasionally,” said longtime council-watcher Media Beverly, who lost a runoff election for a Town Council seat the following week. “I was just wondering which residents you all spoke with or if there was a meeting with everyone who is familiar with Hypoluxo Island.”
Crockett said he didn’t have a list of names of residents who attended the meeting, but that there were representatives from the Hypoluxo Island Property Owners Association.
After the meeting, Beverly gave Town Manager Brian Raducci a letter saying most of the property owners affected by flooding on the island were not notified or invited to participate in the meeting. She asked that the town not proceed with the contract until all island residents were given an opportunity to participate in a meeting, so that they “can have a voice about ongoing flooding issues of all areas on the island prone to flooding.”
The council at the March 14 meeting also approved an expenditure of $37,072 to Baxter & Woodman to do a state-required 20-year stormwater and wastewater needs analysis. The first analysis is due to Palm Beach County for compilation and reporting by June 30.
Crockett said the analysis would begin soon.
Beverly said the mandate for the analysis came last July and wondered why it had taken eight months to engage Baxter & Woodman to do it.
She also asked how much funding, from Rebuild Florida or other grants, the town had applied for and received for both the flooding study and the stormwater and wastewater analysis.
“Under Rebuild Florida last year alone, West Palm Beach received $450,000 to prepare resiliency updates to city plans, data mapping and community outreach,” Beverly said.
“Miami got $2 million to develop a mitigation plan for community stakeholders and to mitigate assessment on critical facilities. And, last but not least, in February of this year, Lake Park got $11 million to retrofit their existing drainage system to mitigate current flooding.
“And Boynton Beach got $16.5 million to make drainage, utilities and roadway improvements to mitigate recurring flooding in Sandcastle neighborhood, which is just south of Sea Pines,” another area in Lantana known to have flooding problems.
Raducci said he wasn’t aware that the town had applied for any such grants in the past, but staff and engineers had, in recent weeks, met with a grant writer to look at all town projects “so we could see what projects would be most eligible for such funding as was mentioned.”
Crockett said the town has money in its 2022 budget to handle the expenses of the analysis and the study.
“We’ll be coming back to the council in the very near future with our recommendations on how to approach the flooding,” Crockett said, but not in time for the budget process. “But we will have some preliminary estimates.”
Implementation of the plans for flooding and stormwater and wastewater needs could take several years and “would be very expensive,” Crockett said.