During an hourlong debate on Feb. 18 hosted by the Lantana Chamber of Commerce, mayoral candidates Robert Hagerty and David Stewart discussed topics that ranged from development plans to water sources to how the town should best use its $9 million reserves.
Held at the town’s Recreation Center, the well-attended debate (both in person and virtually via Zoom) was moderated by Chamber President Dave Arm. Questions were submitted by residents ahead of time.
Hagerty, a former commander with the Lantana police, and Stewart, the town’s mayor for the past 21 years, had plenty to say ahead of the March 9 election. Here are their responses on a few topics. 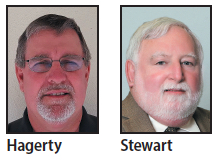 Use of reserves
When it comes to the proper use of the town’s $9 million reserves, Stewart said it wasn’t so much the proper use but how having that money, and keeping it in local banks, gave the town much better borrowing power.
“Because we have money in the bank, we were able to rewrite a lot of loans with cost savings of over $1 million,” Stewart said. “If we didn’t have the money in the reserves for Sea Pines, we wouldn’t have been able to write those checks for over $340,000 to pump 12 million gallons of water out of that area when we needed it.
“If you get a major hurricane hit, you have to rebuild your infrastructure, you have to do all sorts of things to restore property values to the residents,” Stewart said. “By having that (reserves), you’re able to do it.”
Hagerty said the reserves should be put toward repairing infrastructure.
“Right now we have a 3.5 millage rate, which as Mayor Stewart says brings in $4 million a year. But understand we run a $20 million budget. I think if the opportunity presents itself and repairs are necessary, it shouldn’t have to wait.
“It’s nice to have the money in the bank, but we can save money till we’re blue in the face, but we’ve got to be sensible about spending it.”
Stewart countered by saying, “This town has never, since I’ve been mayor, turned down doing any repairs that were necessary. When water lines have had situations, we have lined them, we have saved them. We have taken money from reserves when necessary to provide the infrastructure that’s needed.”

Town’s water source
Arm said the town’s water source may be in jeopardy due to saltwater incursion and other reasons. He asked candidates for their plans to address this potential problem, including the upcoming transfer of the town’s water from the Biscayne Aquifer to the Floridan Aquifer.
Hagerty said he wasn’t familiar with the problem and couldn’t answer at the moment, but said the town has some of the best water around. “I don’t think that’s going to change.”
Stewart offered detail, citing permits from the state and the South Florida Water Management District obtained in 2003 during water plant work.
“Our municipality, since day one, has pulled water from the Biscayne Aquifer, which runs from 200 to 500 feet deep. Those permits will be gone in 2028. Our town’s only solution when that permit is gone will be to go to the Floridan Aquifer, which is 5,000 feet down and more, which means you have to go to a reverse osmosis type of plant.
“The cost to do that would be in excess of $10 million. We need to plan ahead so that in 2028, when the time comes, our residents and the future council will not be burdened with that problem of trying to get the water supply for this town.”
The alternative, he said, would be to buy water from the county, which would cost about the same but result in loss of control of the water plant.

Future development
Lantana is experiencing a period of development, including Aura Seaside apartments, Water Tower Commons and the Kmart site, Arm said. He asked candidates for their thoughts on development overall and balancing residents’ concerns, developers’ desires and the future growth of the town.
“You have to have growth to go forward,” Stewart said. “Many projects have come forward and have somewhat stalled, but they will be done and they will prosper in the future. The development of certain areas will happen and it’s a balance that you have to consider to not cause a problem or an inconvenience for the residents who live around it.
“At the same time, you have to consider the influx of good development. … When something comes in front of me, I try to think, is this going to be great for Lantana four decades from now, or is it just going to be great for five years? And if it’s not going to be great in 40 years, I’m usually not in favor of it.”
Hagerty said he thinks the future growth of the town is on track but that 50% to 75% of businesses are unoccupied.
“I agree to a certain extent with what Stewart has said.We have to do what’s going to prosper for the town for years to come. They’re talking about a project at Kmart (plaza) that’s more residential, but at the same time they’re knocking out where commercial business used to be.
“I think the overall picture needs to be addressed again with what the residents of the town want and how our codes can build into that.”

Candidate pitches
Hagerty said he would bring a new sense of environment to the town, having worked here for 30 years.
“I think the people are first and foremost. … I understand there’s a budget hearing and only so many people come, but I want to make it so we can have additional meetings or some type of meet-and-greets. I want to make sure they have a better understanding of how things work and their voices start the planning process.”
Stewart said residents have the right to get up and speak if they don’t like something every two weeks at council meetings and during the four budget hearings. “I have never denied anyone who wants to talk about something.”
Stewart said he was the better candidate for several reasons. “I was chairman of the planning and zoning before I ran for mayor. I attended the meetings consistently in the ’80s and ’90s to understand the flavor of Lantana.”
Stewart also said he has established a good rapport with governors and other officeholders through his work with the Florida League of Cities. He served as president of the Palm Beach County League of Cities in 2007-2008. Having that access has been helpful with projects to take the town forward, he added.
Stewart said he has served the town well. “Your taxes have remained flat. Your property values have gone up, even in spite of the downturn in 2008. Our town has been better than it was 21 years ago. And I want to continue that.”