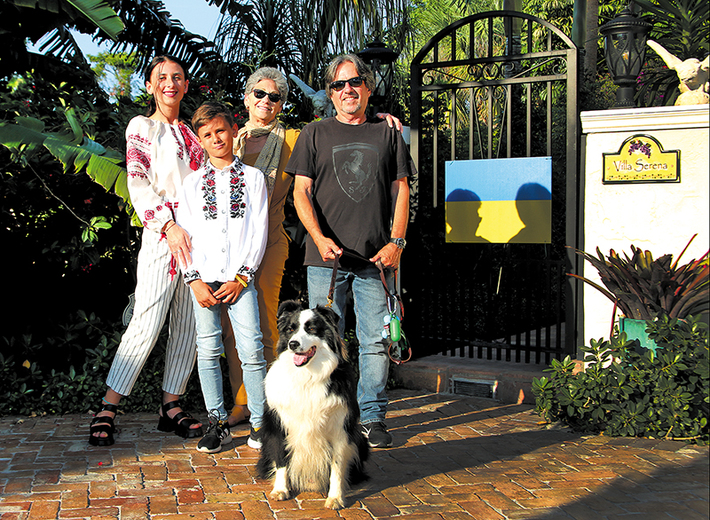 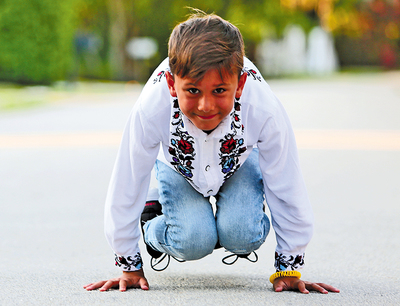 When a Hypoluxo Island couple opened their hearts — and their home — to Ukrainian refugees, they discovered firsthand how a war abroad can unite people at home.
Shortly after Russia invaded Ukraine in February, Norm Feld and Joni Epstein-Feld decided that they had to do something to help the Ukrainian people.
“Norm wanted to go to Poland and serve food to refugees fleeing the country,” Epstein-Feld said. “I didn’t think that was a good idea.”
Instead, the Felds contacted the Ukrainian Refugee Settlement Project, an interfaith organization in South Florida that unites host families with Eastern European refugees. The couple offered their home as a sanctuary.
In late April, Khrystyna Balmush, 30, and her 10-year-old son, Davyd, arrived on the Felds’ doorstep.
Mother and child had fled the bombing in their small village in western Ukraine near Lviv. They were exhausted and frightened when they got here, having traveled a long and circuitous route through Poland, Mexico and California before landing in Miami.
“They slept in airports for six days,” Epstein-Feld said. “The day she got to Mexico they closed the border.”
Khrystyna used her phone to find help and eventually located the Ukrainian Settlement Project — and the Felds.
After the Balmushes had settled into the Felds’ commodious home on Hypoluxo Island, they walked down the street and were astonished to see small, replica Ukrainian flags planted in the neighbors’ lush lawns.
The island community has shown support in other ways as well. Ann McGlinn-Work has taken the newcomers to Lantana’s Holy Spirit Catholic Church on Sundays, and plans to take them to a Polish Mass on a Saturday night.
“Khrystyna speaks some English but Davyd doesn’t really understand what’s being said in church,” McGlinn-Work said. “The first couple of times he fell asleep on her arm.”
McGlinn-Work said that she will not understand what’s said in the Polish Mass, but that’s OK. The spirit transcends language, she said. 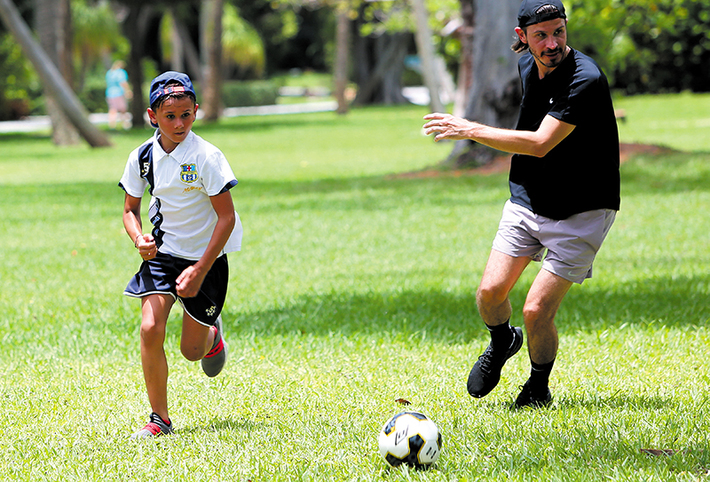 Neighbor Michael Betras said soccer also transcends language.
“I have played pickup soccer with him and he’s really good,” Betras said of Davyd. “I don’t have to say anything — not one word. Soccer is all we need.”
Epstein-Feld said the neighbors have always been friendly, but since the Balmushes arrived, a deeper spirit of kinship has evolved.
“This is really a wonderful community. Everybody has stepped up to help,” Norm Feld said.
And Khrystyna, a single mom who worked in restaurants before the war, has responded in kind. Every week she cooks Ukrainian dishes for the neighbors — borscht and pierogi.
“We must have handed out 20 containers of borscht,” Norm Feld said.
Not all has been rosy for the Balmushes, however.
Khrystyna misses her parents, whom she left behind, and she has heard that two cousins who joined the battle have been badly injured by bombs and bullets.
When the bombing of her village began, Khrystyna Balmush became determined to get her son out of the country.
“The bombs came in my house every day. I heard this — windows breaking,” she said. “I was very nervous.”
Messages sent to her phone told the family to evacuate, she said, but the family had nowhere to go.
“I told my mother I’m going. I must keep my son safe.”
Today, thanks to the Felds, Khrystyna and Davyd do feel that way.
“I say every day to my mother I am safe and OK with these people. Now I have two families,” Khrystyna said. “They are good people who help us every day, every day.” Ukrainian native Khrystyna Balmush and her 10-year-old son, Davyd, stroll with Hypoluxo Island resident Joni Epstein-Feld, who is providing them with a place to stay during the war in their homeland.

The Balmushes have their own little apartment in a guest house behind the Felds’ pool. They walk around the neighborhood at night to talk about their future in America.
Eventually Khrystyna wants to go to college, maybe to study information technology. First, she says, she needs to take English classes so she can communicate and get a job.
Meanwhile, Epstein-Feld has enrolled Davyd in a local school after weeks of working through red tape.
“He came home today and said he had made three friends,” Epstein-Feld said with a smile. “That is a real accomplishment.”
Neighbors say the Felds are always quick to lend a hand to people in need.
“They are just amazing people,” McGlinn-Work said. “Khrystyna and Davyd couldn’t have found a better spot — or better hosts.”
For their part, the Felds hope others will read their story and become inspired.
“There are not many host families in Palm Beach County,” Epstein-Feld said. “Our hope is that others will offer to host Ukrainian families.”