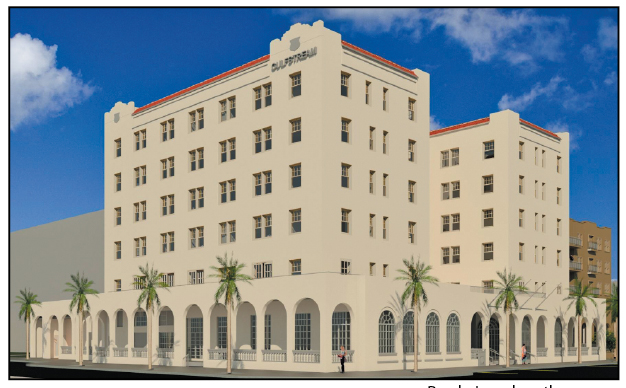 Renderings show the Gulfstream in perspective, above,

and in a Lake Avenue streetscape.

One of the owners of the historic Sundy House in Delray Beach recently received approval to renovate the historic Gulfstream Hotel in Lake Worth.
The combined planning and historic preservation meeting, held Feb. 17, means the Gulfstream project won’t have to be reviewed by the Lake Worth City Commission.
The city’s Historic Resources Preservation Board was able to review only three of the seven issues in a session that lasted nearly six hours. The remaining four issues will be heard at the March 9 meeting.
They include: razing two rundown historic homes to make way for the new hotel annex; adding a 6,500-square-foot, one-story building on the southeast side of the Gulfstream Hotel; and building the five-story hotel annex that will be 65 feet tall and a two-story parking garage with rooftop parking on the hotel’s west side. The garage can accommodate 145 cars.
Board Vice Chairman Darrin Engel stepped down from the dais because his employer, REG Architects, recently was hired by the development team to be a consulting architect.
The project will be done in phases, with the Gulfstream Hotel finished first. Amenities will include a champagne room and a rooftop bar.
Restoring the hotel to its 1925 grandeur will result in 18 fewer rooms for a total of 87 rooms. The still-to-be-approved addition will provide kitchen facilities and have a rooftop pool, deck and pedestrian walkway to the hotel annex.
Most of the 24 people who commented want to see the Gulfstream reopened. It’s been closed for more than 10 years.
Some residents who live in nearby condos were concerned about the noise level of the rooftop deck and wanted to know the hours it would operate.
Others were concerned about the parking, especially when the Gulfstream hosted a wedding or other big event. Bonnie Miskel, the land-use attorney for the project, said the owners would agree to do a parking study six months after receiving the last permit for the hotel annex.
Rick Gonzalez of REG Architects said another floor could be added easily to the parking garage.
Gonzalez also praised his employer, Hudson Holdings. “Florida is so lucky to have Hudson Holdings here from Chicago. They will bring back economic vitality to Lake Worth,” he said.
In May 2014, Hudson Holdings teamed with Carl DeSantis, founder of Rexall Sundown vitamins, to buy the Gulfstream Hotel for $7.22 million. The hotel was placed on the National Register in 1983.
In Delray Beach, Hudson Holdings partnered with Marshall Florida Holdings in July 2014 to pay $17.5 million for land on South Swinton Avenue that includes the historic Sundy House.
For the property, now known as Swinton Commons, the development team is seeking Delray Beach approval to move eight historic homes and demolish eight others. Gonzalez also is the consulting architect for that project.