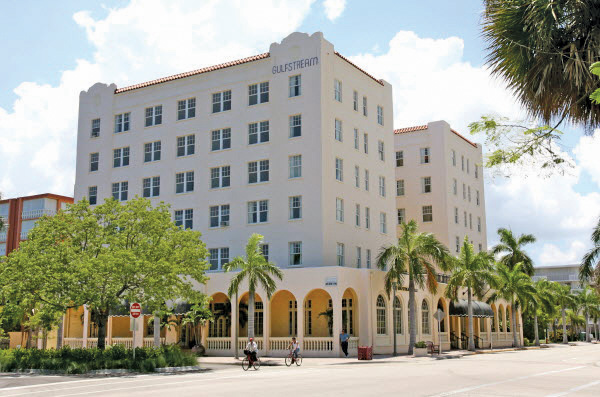 The Gulfstream Hotel in Lake Worth has been closed for more than 10 years. Photo provided

Two partners are vying for control of the historic Gulfstream Hotel in Lake Worth as an April expiration nears on the city’s approvals of a proposed $70 million renovation.
Steven Michael, a principal of Delray Beach-based Hudson Holdings, said his firm on Oct. 20 offered to buy out Carl DeSantis from his stake in the Gulfstream Hotel. The offer is good for 60 days, Michael said. He declined to offer details.
“We have no comment on any proposed transaction involving the Gulfstream Hotel,” Jeff Perlman replied via email on Oct. 24. He is executive vice president of DeSantis’ CDS International Holdings in Boca Raton. “CDS Gulfstream remains the managing member of the property.”
Over the summer, CDS moved to gain control of the six-story, Mediterranean-style Gulfstream, long considered a crown jewel in Lake Worth. Added to the National Register of Historic Places in 1983, the Gulfstream Hotel has been closed for more than 10 years.
“Recently, we have become managers of the project,” Perlman said via email in early October. “We immediately started to work with the city to clean up the property and work through code enforcement issues.”
William Waters, community sustainability director for Lake Worth, confirmed that the city placed a notice on the hotel this summer about code violations including high grass and broken windows. The code issues have since been addressed, he said.
To date, the only portion of the project completed has been the razing of two historic houses on the 1.8-acre site near the foot of the Lake Worth Bridge.        Perlman declined to answer specific questions about when CDS Holdings took control of the hotel from Hudson Holdings and why the change occurred.
On June 16, state corporate records were changed to have William Milmoe, CDS Holdings president, listed as the property’s registered agent.
He replaced Hudson Holdings principal Andrew Greenbaum as the registered agent.
Hudson Holdings is also the developer of the proposed Midtown Delray Beach project along Swinton Avenue in the Old School Square Historic District, which includes the historic Sundy House. The project of retail, condo, office and hotel rooms was rejected by the city’s Historic Preservation Board in June, but a revised version is under review by city planners.
In February, Terry Woods, a Delray Beach real estate investor, sued Hudson Holdings Gulfstream, the division involved with the hotel, for nonpayment of a $1 million balloon loan that carried a 9 percent annual interest rate. HH Gulfstream missed the interest payment due in November 2016 and the months following, according to the lawsuit.
Woods filed a voluntary notice of dismissal in July, indicating that he was paid.
DeSantis, a billionaire who founded Rexall Sundown vitamins, personally guaranteed a $5 million Hudson Holdings loan from Florida Community Bank in Winter Park that made up the bulk of the $7.2 million Gulfstream purchase in 2014. Greenbaum signed the mortgage for Hudson Holdings, according to property records. The mortgage remains on the hotel.
Michael met DeSantis around 2006, when DeSantis owned the two-square-block property on Atlantic Avenue and the Intracoastal Waterway in Delray Beach now known as Atlantic Crossing. Perlman was the city’s mayor at the time. Michael tried to take the mixed-use project through the Delray Beach approval process but was unsuccessful.
“The city turned him down because we thought it was just too much development for that property,” Perlman said.
Michael’s team did take the Gulfstream through Lake Worth’s historic review process, receiving approval in March 2016. The current development order is good through April 2018 due to hurricane-related development extensions.
The renovation is planned in phases with the hotel finished first, according to Lake Worth Historic Resources Preservation Board approvals.
Amenities will include a champagne room and a rooftop bar. Restoring the hotel to its 1925 grandeur will result in 18 fewer rooms, for a total of 87.
The approvals also included demolition of the two historic houses to make way for a 6,500-square-foot, one-story building on the southeast side to provide kitchen facilities for the Gulfstream Hotel.
A 65-foot-tall, five-story hotel annex and a two-story parking garage with rooftop parking on the hotel’s west side are also in the plans.