In the early 1940s, Michigander Ruth Jones was a single lady in her 20s who began traveling to Florida with her cousin. Her aunt owned the Old Dutch Mill restaurant on Federal Highway, the very spot she eventually met her spouse.

“I got sand in my shoes and never went back,” she recalls. “People don’t use that expression much anymore, but that’s what happened.” She fell in love with the Sunshine State with its flowers, strawberries and beaches. She was also quite smitten with a tiny one-story cottage at the corner of NE First St. and NE First Ave. in Boynton Beach.

In 1946, she used money she had inherited to buy the modest cottage with wood floors and Dade County pine paneling so hard she had to get help when she wanted to pound a nail in the wall. She paid $12,000 cash. Before long, she married Mason Jones, a farmer and Boynton pioneer, and raised her family in the 1,000-square-foot home.

About three years ago, Jones sold the cottage to the Community Redevelopment Agency, a group that promotes development in downtown Boynton. In June, the agency approved a land lease, which would allow the cottage to be rehabbed and moved to the southwest corner of East Ocean Avenue and Southeast Fourth Street. A restaurateur has expressed an interest in opening a casual eatery in the house.

Boynton Mayor and CRA Chairman Jose Rodriguez says the Jones Cottage is a true Boynton Beach landmark and that the CRA felt strongly about preserving this tangible part of the city’s history. Repurposing the cottage is part of an overall project to revitalize the Ocean Avenue area. 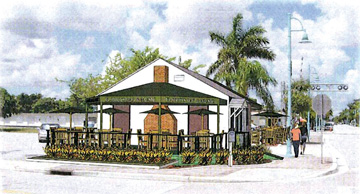 What does Jones think of her old home becoming a restaurant?

“When I see it, I’ll believe it,” Jones laughs, adding that the wheels of government turn slowly.

Boynton was very different in the 1940s and ’50s, she recalls. “The population was around 3,600 and if you went west of Seacrest you were in the wild.”

Mason was a member of the city’s volunteer fire department and their mutt, Trixie, was the department’s mascot. “When the fire siren sounded, the dog couldn’t wait to go and if Mason didn’t go quickly enough, Trixie would take off on her own.”

Sadly, Mason died in a car accident when the youngest of their five children was 2, leaving her to raise the children by herself. She worked at Bud’s Take-Out for 12 years and later at the Ocean Club for 18. She was the cook at the snack bar by the pool.

Today, Jones lives west of Seacrest, although it’s far from the “out in the wild” place she described from years ago. She has a spacious two-bedroom, two-bathroom home in a well-manicured adult community with nice people for neighbors. But she will always cherish the time she spent at the two bedroom, one bath home at 201 NE First Ave.

Sure, the Vernacular-style house with mango, rose apple and avocado trees in the backyard was tiny, but she made it work. Her three daughters bunked in one bedroom, her two sons in the other. She slumbered on a sleeper sofa in the living room.

“Christmas was always a very special time, with stockings hung from the coquina fireplace,” Jones recalls. She said she had heard that Lucille and Otley Scott, owners of the now defunct Lucille and Otley’s restaurant on Federal Highway, were the original homeowners who put in the fireplace.

Another of the cottage’s previous inhabitants was the late Irvin Lacey, a longtime Boynton Beach resident who was born in the home.

Jones says she never thought she would move away from the cottage and still misses the home, especially the yard with its trees and birds. She changed her mind about staying there a few years ago after her home was burglarized.

“I had so many nice neighbors there, but all of them are gone,” she says, “and the neighborhood has really changed.”