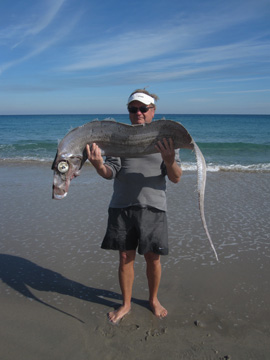 The beach changes every day. The routine of Delray Beach residents Carolyn Hoffman and her husband does not.
The Tennessee transplants walk the Delray shoreline at low tide, scanning the sand for trash and treasures.
They have found, Hoffman says, “a fancy high heel, without the shoe, lots of solo sandals (all sizes and colors), a few bikini tops, an unusual-shaped glass bottle with Japanese characters imprinted on it, way too many helium balloon remains, and of course hundreds of the small plastic hook/tackle bags from fishermen.”
They put the trash in plastic bags to carry off the beach. The treasures, well, it depends. The 8-inch perfect nautilus shell came home with her. And the roughly 7-foot-long, flat-bodied, long-snouted sea creature, that looked up at Hoffman with one bulging eye, from the surf just north of Atlantic Avenue in early January? Well, they settled for photos.
Hoffman, a retired elementary schoolteacher, saw it first and called her husband, Harry Furrevig, a retired pilot and current fisherman, to have a look.
“It was a very interesting creature,” she said. He had never seen anything like it. She “let” him hold it for the photos she took.
“It didn’t smell at all,” she said.
Aside from being no longer among the living, and a 2-inch slash in its side, it was in good shape — no other creature had taken a bite out of it, from what they could see.
They showed the photos to the lifeguard at Atlantic Avenue who also had never seen anything like it.
They sent the photos to the kids, who “Facebooked it,” Hoffman said, and came back with the probability that it was an oarfish — a deepwater fish that can grown to more than 50 feet long.
That didn’t stop one news station that picked up the story of their find from conjecturing that it was the “Loch Ness monster,” a friend told Hoffman.
It remains the couple’s most unusual find, but they continue to stroll the shoreline daily, with appreciative eyes for more mundane treasures. Furrevig is in the midst of collecting enough olive shells to give each of about 100 guests at an upcoming family wedding.
The nautilus shell — so flawless, Hoffman half expected to see a label saying where it was made when she turned it over — smashed to pieces one day, when the wind blew it off the shelf she kept it on.
“I wish I had taken a picture of that,” she said. “At least of the pieces.”