0
By C.B. Hanif The uplifting annual National Day of Prayer program, hosted locally by the Delray Beach Interfaith Clergy Association, is as representative of humanity and our

various faith traditions as it gets around these parts. And it just became more
so: For the first time, Hindu is among the myriad faiths to be represented at
the Duncan Center on May 6 at 6 p.m.


Although they are our fellow citizens from all walks of life, most of us know little of those who worship at the roughly 50 Hindu temples and religious centers in
Florida.


Thus we may be surprised to learn that the introductory question at the www.BAPS.org Web site, to which Dhaval Bhagat referred me, is consistent with the sentiments
of most faith traditions and even those of people who claim no particular
faith:


“Many ask, ‘How can you mix spirituality and social service?’ We ask, ‘How can you separate the two?’” One result was the Queen’s Award for Voluntary Service to
the BAPS Children’s Forum in London last October.


Bhagat is media coordinator for the BAPS Shri Swaminarayan Mandir, at 541 S.E. 18th Ave. in Boynton Beach — next to the Publix behind Sunshine Square at Woolbright
and Federal. “Mandir,” he explained, “is the word for the temple.”


The congregation is completing a renovation in preparation for its May 9 grand opening that dovetails nicely with the prayer day. That will provide another
opportunity to know those in our community who practice the world’s
third-largest religion (after Christianity and Islam), indigenous to Southern
Asia, with a billion adherents and a broad range of traditions.


Bhagat says congregants here worshipped in halls and homes, just as those of many different faiths got started, before the mandir opened in 2001. An average of
350 people now gather for the main service on Sundays from 4 to 6 p.m. He’s
been going for 12 years, he said. 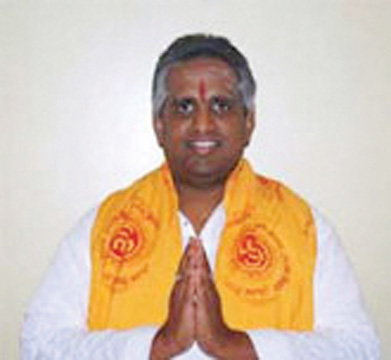 Similarly, for two years Devanathan Mahadevan has been priest of the 1,200-family South Florida Hindu Temple on Griffin Road in Fort Lauderdale. He’s participated in
interfaith activities from there to California to Ohio, and it shows.


“Water’s the same, whether we call it the Indian Ocean or the Atlantic Ocean,” said Mahadevan. “Same with the human being. We are going toward our own destiny. But
we are going on different paths. Trying to understand each other, that is the
only thing we need.”


Here’s applause for the path that makes his ages-old tradition among the enlightening participants in the national prayer observance.


C.B. Hanif is a writer, editor and media and inter-religious affairs consultant. Find him at www.interfaith21.com.