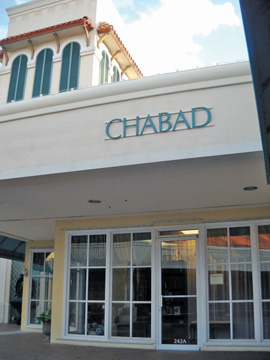 The Chabad of South Palm Beach’s new center in Manalapan’s Plaza Del Mar is just plain welcoming.
“We really did try to create that feel,” said Rabbi Leibel Stolik. “We wanted it to be an inviting, warm, welcoming atmosphere, so that people can feel welcome, walk by and feel that everybody and anybody can come in. And this includes Jews and non-Jews as well.”
That initial consonant in “chabad” sounds closer to a “k” to some. “If you say ‘habad,’ you’ll be forgiven,” Stolik quipped.
The chabad movement within Judaism is characterized by its emphasis, he said.
“Chabad stands for the three intellectual parts of your brain: knowledge, understanding and wisdom. Basically, it means to incorporate godliness and the appreciation of godliness not only in your heart, but in your mind as well.”
There is much more to this philosophy shared by hundreds of thousands of people at thousands of chabad locations. Each is independently operated, has its own budget, fundraising, services, programs and so forth.
Stolik cited 10 to 15 chabads in Palm Beach County, including three in Boca Raton, two in Boynton Beach and one in Delray Beach.
The philosophy “is the idea of helping and reaching out to and caring for other people,” he said.
That’s what he, his wife, Shaina, and others have been doing for more than two years in various rented space and, since September, in the renovated storefront at 242 S. Ocean Blvd. in the Plaza Del Mar, next to the Cashmere Shop.
Although a chabad is primarily a religious organization, “whenever possible we try to help out people in the community as well,” he said.
That could mean volunteering in hospitals, helping the elderly or any of the host of social programs offered by a chabad.
The Chabad of South Palm Beach’s Jan. 23 “Open Air Jazz Concert” at the Lantana Nature Preserve drew more than 100 people. There are women’s and men’s activities. A Passover seder will probably draw other people.
“For most synagogues,” Stolik said, “and perhaps churches as well as mosques, there’s a certain need that members pull together and create a house of worship, and they bring down a rabbi or leader or minister or imam to serve their purpose.”
In this case, “There wasn’t an established membership that felt that there was a need to establish a new synagogue. We felt that if we open up our doors, and if we reach out to people and create this environment, we felt that this was a need for the community, that we were doing good for the community.”
Although the various education, holiday and community programs are going on as before, he said, the regular prayers services are still at their beginning and picking up. 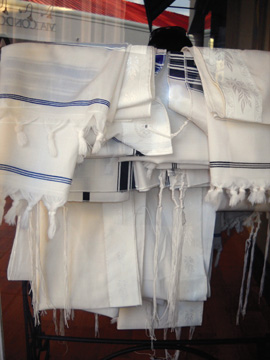 Inside the entrance, prayer books and Bibles adorn bookcase shelves. There are prayer shawls — in this case blue-and-white. One usually dons these when entering a synagogue to pray, also usually wearing a kipah, the traditional Jewish head covering, “symbolizing that there’s an authority above us, there’s always something on top of us,” the rabbi said.
“Pure inspiration,” is how Stolik described the traditional 9:30 a.m. Saturday service during which a chazzan leads the prayer and a portion of the Torah is read. A recent reading featured the portion pertaining to the 10 Commandments, “so it was a very special week.”
Still, how does a storefront center exude such warmth of atmosphere?
“There were some people in the community that helped us set up the space,” said Stolik, “so maybe it’s a tribute to their skill in the layout and the design.”
And, of course, where good people gather, there’s usually a good spiritual vibe.
More information: chabadofsouthpalmbeach.org or 561-889-3499.

C.B. Hanif is a writer and inter-religious affairs consultant. Find him at www.interfaith21.com.